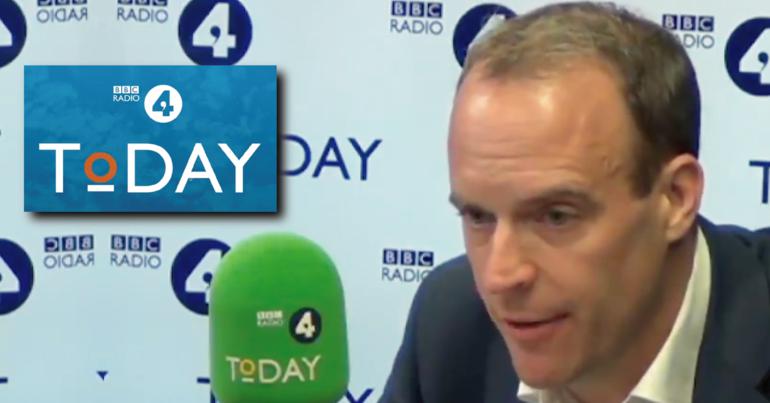 With Boris Johnson avoiding media scrutiny, it’s fallen on his supporters to act on his behalf. This has led to some disturbing interviews as MPs struggle to defend him. The other thing this leadership race has seen is Tories openly admitting that they’re terrified of facing Labour in a general election. In an interview on Radio 4‘s Today programme, Dominic Raab faced both these problems.

Ex-Brexit Secretary @DominicRaab says MPs voting against a no-deal Brexit will have "zero legal effect" and "vanishingly few" Tories would vote against the government in a no confidence vote #r4today https://t.co/poevhccmTg pic.twitter.com/kwSP3VIVJL

The programme opened with John Humphrys claiming that Johnson is “still declining our invitation to appear”. In the interview, Raab made excuses for Johnson potentially failing to get a deal, saying:

If the EU wants to just throw up its hands and say ‘we’re not going to budge’, we will refuse all reasonable compromise, and we end up on WTO terms, it will be a decision made by the EU.

‘If we end up on WTO terms it will be the EU’s choice’ declares Dominic Raab. And so it begins @BBCr4today

Raab didn’t expand on what sort of deal Johnson would actually push for, or how he would get it. He did suggest that the threat of no-deal should be enough to motivate the EU, saying:

by refusing to [take no-deal off the table], Boris has given us the best shot of getting a deal

He also suggested that a deal could be achieved by just working through the summer break. He didn’t discuss how we’d get the EU to agree to this.

Reality is that institutions are reassembling following European Elections

Either former Brexit Secretary is lying or he doesn't understand how EU institutions work#R4today https://t.co/Bvvl8D7Env

Raab also didn’t say if Johnson would work through the summer. This would be important to confirm, as Johnson – when mayor of London – famously refused to cut his holiday short during the 2011 riots.

On top of this, Raab said something else that seemed to re-confirm what’s actually keeping the Tories together.

Fear of a socialist Britain

When asked if he thought a proposed vote of no confidence could prevent Johnson enacting no-deal Brexit, Raab said:

I think as we saw earlier on your show – people like Rory Stewart, on top of Tobias Ellwood – backing away from that and saying, ‘of course they won’t vote in a vote of no confidence to see Jeremy Corbyn become prime minister’.

Raab’s opinion currently seems to hold true with a lot of Tories who won’t back no-deal:

Cabinet Minister @RoryStewartUK says he "wouldn't vote to bring down a Conservative government" but would vote against a no-deal Brexit #r4today https://t.co/Pu7m3TxSv7 pic.twitter.com/krD4U5ooSF

Ah. So that's how the story ends. The supposed pro-Remain Tories are going to prop up a Boris Johnson government even if it goes for No Deal. Off the cliff we go. https://t.co/3dHSCVCRuE

INCORRECT.
I simply state the huge long term dangers of NO DEAL to our economy, security, reputation, the Union and our Party.
I simply forecast there are some who will do all to stop this.
Let’s avoid this scenario: LEAVE with a workable deal. https://t.co/lnWNHjiQWQ

Raab is far from the first Conservative to openly discuss their fear of an election. On 24 June, Jeremy Hunt said:

When a government has no clue, no plan, and no hope of winning a general election, that’s probably a fair time to call one.