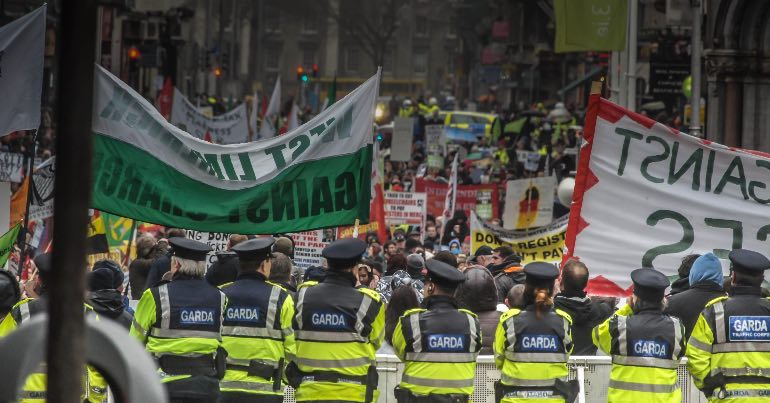 An Irish campaign group declared that it has “serious and urgent concerns” about how the state reacts to “protest and dissent”. The Irish Council for Civil Liberties (ICCL) also argued that protesters are at risk of a “heavy-handed” response from the authorities. It made the comments ahead of a press conference on 26 June, where it detailed its findings.

In a press release, the ICCL said it travelled across the country gathering information from protest groups about their treatment by the authorities. It met with “environmental activists, anti-war protesters, anti-eviction groups, and activists living in Direct Provision”. It also consulted with members of the police force “and relevant oversight bodies”.

As a result, it claimed it has “serious and urgent concerns” about protest and dissent in Ireland. It reported:

We have been informed that activists living in Direct Provision deal with retribution up to and including the with-holding of food and benefits for holding protests, and that housing activists arrested at evictions have been subjected to degrading treatment such as strip-searching.

Protesting on the fringes

Liam Herrick, executive director of the ICCL, observed that police “are supportive” of large protests taking place in the public eye. But he also said the police and state have a “much more heavy-handed” response with other protesters. This includes protesters “living on the margins of society or protesting outside of the media spotlight”.

The ICCL went on to declare that:

there is a wide gap between the stated position of the Garda [police] with regard to protecting the right to peaceful protest, and the experiences of many of the groups involved in organising a wide range of demonstrations and protests.

The ICCL disclosed that some groups alleged the police may misuse its powers. This reportedly led to some incidents of police arresting protesters under the Public Order Act and later dropping the charges. It also related reports of police intimidation via “photography, following cars, harassment, and stop-and-search”.

The organisation claimed that some police may evict “protesters from squats when media are not present”. It suggested that police have also arrested people protesting in “public spaces such as city councils”.

The ICCL also claimed that police may have strip-searched protesters and “inflicted psychological trauma”. The report states:

Arrested protesters have allegedly been encouraged to give statements without lawyers present, and in some cases even denied access to their lawyers.

The Canary asked the police to comment on these allegations. A spokesperson said:

Any member of the public who feels they have been ill treated by An Garda Siochana can make a complaint to GSOC [Garda Síochána Ombudsman Commission].

The ICCL also reported a lack of information about police training, policy, and use of “legal powers and the use of force”. It argued that this shows “serious weaknesses in the Irish approach to managing protests”.