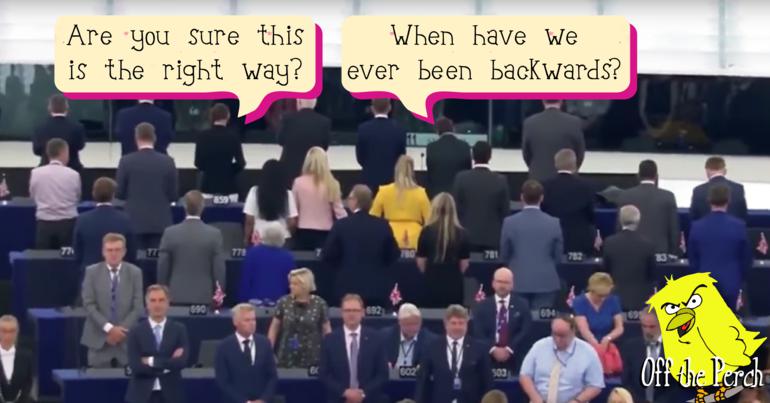 The Brexit Party has now taken its seats at the European Parliament. In a typically farcical turn of events, it wasn’t the sitting they had a problem with. And despite early claims of it being a protest, it turns out the Brexit Party just stood up wrong.

Brexit Party MEPs turn their back as the European Union anthem is played in the Strasbourg Parliament. pic.twitter.com/B58eWR0PJ5

During an intermission, the Brexit Party MEP Simon Brick-Headington confirmed:

Was it a protest? No – the protest is planned for later on when they play the EU anthem.

When it was pointed out that the anthem had already been played, Brick-Headington laughed and said:

This resulted in much blinking from the gathered journalists. Eventually one of them asked:

So how will you protest when they do eventually play… what you think is the EU anthem?

The MEP smiled and leaned in close:

Don’t tell anyone, but we’re planning to piss and shit ourselves en masse. That will let the EU know we’ve arrived. Just imagine the awful smell they’ll have to put up with!

A journalist asked if Brick-Headington would feel any embarrassment for publicly shitting himself. The MEP looked confused and asked:

Embarrassment? What’s that when it’s at home?

He then went back to carry on representing the United Kingdom of Great Britain on the world scale. This is unfortunate, as although there’s much to actually protest the EU about, the Brexit Party’s main worry seems to be that it’s not subservient enough to the US. That and the fact it chose the wrong anthem.