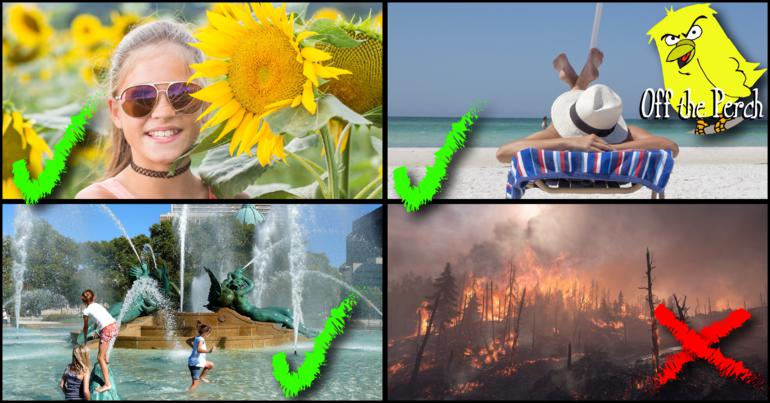 The planet is – quite literally – catching fire. Record temperatures are being smashed. The railways are melting. Our climate is collapsing.

So what’s the most appropriate way of covering this?

Oh – I dunno – how about a picture of some fucking kids frolicking in a fountain or something?

The media continues to illustrate climate chaos stories as if they are about holidays. How about pictures of forest fires, dried up reservoirs and wilting crops. Because that's the reality, not endless days playing in the pool. pic.twitter.com/kapnlZozsy

the planet is on fire and it's our fault and a lot of people are going to die, can you fucking not https://t.co/vzN1ou9hy4

Three cheers for the apocalypse

Off The Perch caught up with the BBC’s head meteorologist to find out why they’re applauding the planet dying:

Well, it’s exciting isn’t it? Breaking records and that? We live in a very exhilarating time, as we’re seeing weather records broken all the time. Did you know that the permafrost is catching fire now? That never used to happen! It’s thrilling, right?

When asked why they didn’t use pictures of these unprecedented ecological disasters instead of women sunbathing, the scientist told us:

We’ve been told not to use them because they might make people feel a bit sad-face. Also, we’ve already paid for the ‘fun in the sun’ pictures, so we might as well get the most out of them.

The predictions of climate collapse are all coming true. In many instances, reality is actually exceeding what we feared. But – as bad as that is – nearly as troubling is the media’s urge to get the Pimms out and celebrate every time we lurch further towards the apocalypse.