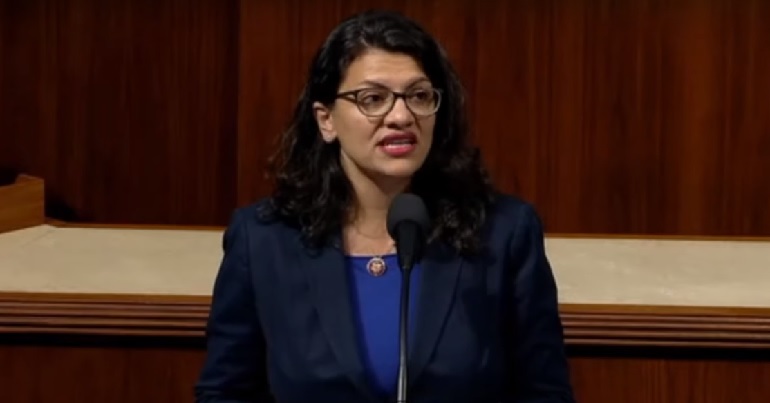 This week, as Israeli occupation forces demolished Palestinian homes and violently attacked peaceful protesters, the US House of Representatives voted overwhelmingly to condemn the Palestinian-led Boycott, Divestment and Sanctions (BDS) movement. And while a small number of congress members opposed the resolution, several so-called progressives backed it.

But Rashida Tlaib – the first ever Palestinian-American congresswoman – put all of the resolution’s backers to shame with a powerful statement in defence of free speech.

All Americans have… a constitutional right – guaranteed by the first amendment – to freedom of speech, to petition their government and to participate in boycotts. Speech in pursuit of civil and human rights at home and abroad is protected by our first amendment.

The right to boycott is deeply rooted in the fabric of our country. What was the Boston Tea Party but a boycott? Where would we be now without the boycott led by civil rights activists in the 1950s and 60s, like the Montgomery bus boycott and the United Farm Workers’ grape boycott?

WATCH: As the granddaughter of a Palestinian grandmother (my sity) and as the daughter of Palestinian immigrant parents, I rose in opposition to #HRes246, an attack on our freedom of speech and right to boycott the racist policies of the government of Israel. pic.twitter.com/e6eHq3tAwe

It wasn’t just Tlaib’s powerful speech that put anti-BDS ‘progressives’ to shame, though. Because Twitter was on hand to call out people like Ayanna Pressley, Ro Khanna, and Tulsi Gabbard for backing the resolution:

The argument by anti-BDS sorts like @RoKhanna, @AyannaPressley and @TulsiGabbard is that BDS actions inhibit peace.

Because in this case you joined in in an official condemnation of one party in what is clearly a two party conflict.

By doing so you acted to skew the power balance in a negotiation in which BDS is the only real leverage that Palestinians have here in the US.

You know what is a really troubling political move to make?

Condemning poor people for utilizing the only methods of defending themselves available to them while saying nothing about the rich country killing their kids and knocking down their homes.

Tlaib, Omar & AOC all voted “no.” If Pressley doesn’t get Palestine on this most basic and limited point she’s made her position clear. This is an Israel lobby resolution targeting a nonviolent resistance movement. Voting “no” doesn’t even require supporting BDS. So simple so bad

The anti-BDS resolution was an assault on free speech. It was also an attack on the non-violent movement of people suffering daily under a brutal occupation. So those so-called ‘progressives’ who voted to condemn BDS should hang their heads in shame. Those like Tlaib who stood up for freedom and human rights, meanwhile, deserve our full support.