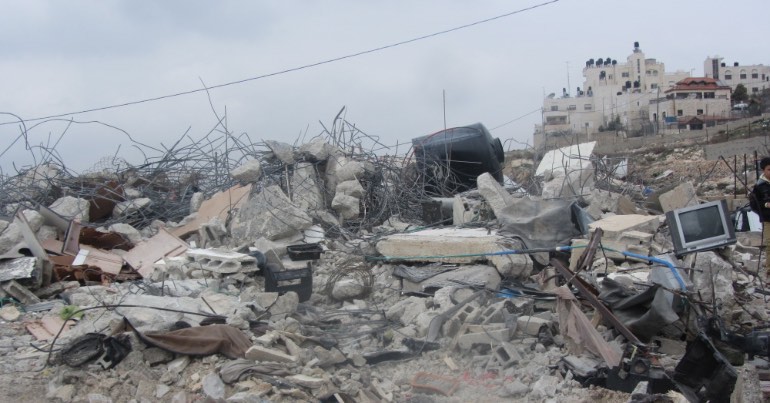 Israeli soldiers have injured a number of Palestinian and British activists in occupied East Jerusalem. According to the International Solidarity Movement (ISM), the activists “were stamped on, dragged across the floor by the hair, strangled with a scarf and pepper sprayed” by the soldiers. The ISM described the actions as “sadistic”.

The British activists are members of the ISM and were engaging in “non-violent action” by staying in the home of a local Palestinian man. Along with 30 local people, they were attempting to “delay the demolition” by Israeli authorities of the home of Ismail Obeide.

Early on the morning of 22 July, Israeli soldiers broke down the door of Obeide’s home and began attacking him and the activists.

According to the ISM, the Israelis “used excessive force”. It also reported that they teargassed the activists while in a small and unventilated room. One of them, Chris Lorigan, said:

When the soldiers found us in the bathroom, they threw multiple tear gas canisters and shut the door. As we started to suffocate in the smallest room in the house, soldiers burst in and dragged us violently, pulling at every possible part, regardless of safety or policy.

He went on to describe how the Israeli forces began to beat him:

I was dragged by my feet and lifted up, kicked in the stomach, then one soldier in particular stamped on my head four times, at full force, then standing on my head and pulling at my hair, he then stamped on my throat and others started punching my torso.

Lorigan declared that this “was a sadistic display of violence” by the soldiers.

The soldiers also crushed the hands of one of the activists in the attack. As a result, her hands “will be permanently misshapen unless she gets cosmetic surgery”. And another activist related how:

A soldier dragged me by my keffiyeh [scarf] across the floor strangling me until I screamed when he then crushed my neck under his knee.

The ISM also reported that 12 Palestinian activists ended up in hospital after the Israeli soldiers kicked them down some stairs. The soldiers also shot two of them “at close range with rubber-coated steel bullets”.

After the Israeli soldiers evicted the activists and Obeide, they demolished his home and those of other people. The ISM called the actions “Evidence of the ongoing ethnic cleansing of Palestine”.