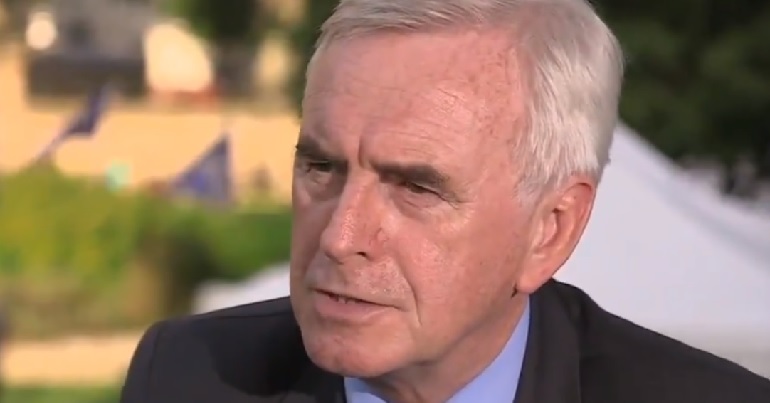 On 23 July, BBC Newsnight shared a clip from an interview with shadow chancellor John McDonnell. In it, he expertly highlighted the absurdity of new Liberal Democrat leader Jo Swinson‘s refusal to work with Jeremy Corbyn.

Responding to a question about Swinson’s hostile stance, McDonnell said:

Isn’t it interesting? Jo Swinson was willing to work with the Tories, introduce some of the most savage austerity cuts that cost people their lives… But she won’t work with a Labour leader who opposed all those austerity measures.

I think Jo Swinson needs to look inside her own conscience about her own behaviour under the austerity programme she supported in government.

“I think Jo Swinson needs to look inside her own conscience about her own behaviour under the austerity programme she supported” – John McDonnell MP, Shadow Chancellor, after Jo Swinson said she would work with Labour but not Jeremy Corbyn himself@johnmcdonnellMP | #newsnight pic.twitter.com/eVqTRvMbBy

So @joswinson on @BBCr4today making it clear she would only go into coalition with @UKLabour if @jeremycorbyn was removed as leader. I suppose that would be to make it easier for her to push the neo-liberal policies she backed in coalition with the Tories.

Swinson has ruled out any possibility of a coalition government with Jeremy Corbyn as Labour leader. But as McDonnell highlighted, concerns about her don’t stop there.

As The Canary reported after Swinson became Lib Dem leader, she was right behind Coalition-led austerity from 2010 onwards. She consistently voted to reduce welfare and benefits, including cutting payments for people with illnesses or disabilities. She also voted to cut the Educational Maintenance Allowance for 16-to-19-year-olds. And she helped to raise university tuition fees, despite her party promising not to. And she even wanted to honour Margaret Thatcher at one point.

It was no surprise, then, that #YellowTory began to trend on Twitter after Swinson’s victory. And the anger of some centrists couldn’t stop people exposing her terrible political record.

But if her record wasn’t bad enough, she’s also been very liberal with the truth. This week, for example, she falsely claimed that Corbyn had gone “on holiday for two weeks in the middle” of the Brexit referendum. Meanwhile, her website says she has “campaigned tirelessly to save our environment”; even though her voting record shows she supported the badger cull, fracking, HS2, and voted to sell off public forests. It also emerged previously that she had accepted two donations totalling £14,000 from Mark Petterson, the director of a company involved with fracking.

In short, Swinson’s record suggests that her opposition to Corbyn may have less to do with Brexit and more to do with profound political differences that place Corbyn firmly on the right side of history and her on the opposite side.