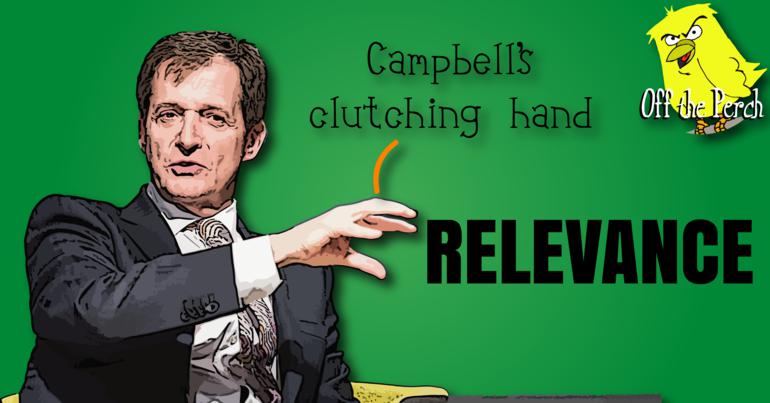 Alastair Campbell – Tony Blair’s infamous spin-doctor – has left the Labour Party. Or, to be more accurate, he’s stopped trying to get back into it. Labour had already thrown him out.

Despite Campbell having less influence over the current Labour movement than Margaret Thatcher’s ghost, he still has enough friends in the media to go out in a blaze of attention seeking.

Full text of my letter to @jeremycorbyn explaining why I no longer want to be readmitted to Labour – https://t.co/DmdI85W3OW

Campbell and Blair took the art of political bullshitting to a whole new level. Predictably, faith in politicians dropped significantly. Despite this, these same men can’t understand why no one listens to them any more.

When asked if being rid of this infamous liar was a good thing, a Labour spokesperson said:

The legion of BBC presenters who see Campbell as their Brexit messiah said things like:

If the Labour movement isn’t there to bow to the whims of non-unionised millionaires like us, then what is it there for?

So Campbell pushed for an illegal war that killed hundreds of thousands of innocent Iraqis – and? That was ages ago. A lot of those dead Iraqis are probably alive again by now.

Of course, some might argue that Campbell – one of the most untrusted men in the non-Westminster world – is an asset. They’ll probably have a well-structured argument, too, because these people are nothing if not good at selling shite.