#catsatpollingstations under threat from forecast of rain - Canary 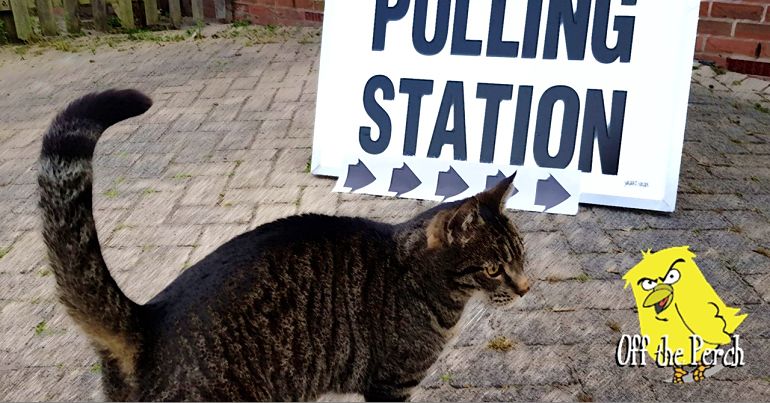 “Vote early” is the message from cats up and down the country as their humans go to the polls.

Every time there’s an election, the slightly tedious hashtag #dogsatpollingstations creaks into life. This consists largely of MPs and senior political journalists saying ‘look at me, I’m human’ by posting photos of their pet pooches lashed to some church-hall railings. The dog’s job is to sit there looking dutiful. Occasionally, the poor mutt will be further objectified with the addition of a party rosette. Essentially, the message is: ‘sit down, be quiet and do your duty’. If you’re good, you can do it all again in five, two, however many years’ time.

Cats naturally take a dim view of this sort of carry-on. If cats want to go to the polling station, that’s their own business. And even if there’s someone there with a camera, the cat will still reserve the right to decide whether or not to smile. On the whole, it probably won’t:

I got hurried in and out of the door as this little guy kept trying to run in. #catsatpollingstations pic.twitter.com/U53c9OXJoH

If the cat decides that, having reached the polling station, it just wants to lick its arse, it will:

Cats, as ever, capturing the mood of the nation. #catsatpollingstations https://t.co/vV2jyflLfR

Get out and vote human

The main reason for a cat to go to a polling station is, of course, to check up on its human:

But this year, there’s added jeopardy. Rain is likely to affect most areas before the end of the day. And no cat in its right mind is going to go out and get a soaking. Hence why cats are stressing the importance of voting as soon as possible. They also reckon it’s OK to use the car if you really need to, especially if you’re giving lifts to folk who’d struggle to vote otherwise. Just know that the cat will be cheering you on from its spot by the fire at home.

Polling stations remain open until 10pm, and anyone in a queue by then will still be able to vote.