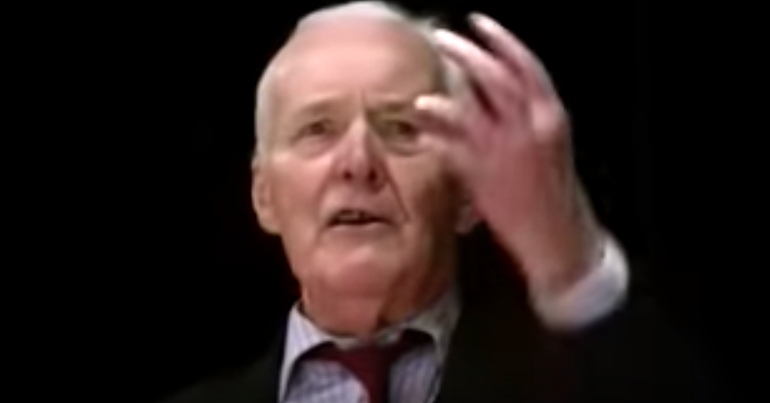 There’s one hard-hitting speech from left-wing Labour legend Tony Benn that we all need to rewatch right now. Because it captures the spirit that we so badly need, both today and every day from here on out.

Benn gave the speech years after leaving parliament. And making an impassioned case for the need to keep up the fight for social protections and access to public services at all times, he stressed that:

He also pointed out that amongst these battles is the need to confront concentrated wealth, adding:

The truth is that this country and world have been run by rich and powerful men from the beginning of time.

Speaking about the transformative 1945 Labour Party manifesto, he said:

If you look at our manifesto [of 1945], it was very clear. It said the interwar [economic] slumps were not acts of god or a result of strange forces. It was the direct result of too much economic power in the hands of too few men who behaved like a totalitarian oligarchy in the heart of our democratic state. They had and they felt no responsibility to the nation.

He also pointed out that, in spite of the UK being bankrupted by the Second World War, the Labour government of Clement Attlee nonetheless went on to establish the NHS and the beginnings of the welfare state.

Keep these two flames burning in your heart

He ended his speech with a call to keep two important flames burning in our hearts:

It is very important to keep optimism… I think progress has been made by two flames that have always been burning in the human heart: the flame of anger against injustice, and the flame of hope you can build a better world.

Benn was a member of parliament for Bristol Southwest between 1950 and 1983, and then for Chesterfield between 1984 and 2001. He also served as a minister in the governments of Harold Wilson and James Callaghan. After retiring from parliament, he served as president of the Stop the War Coalition from 2001 until his death in 2014. He was also a longstanding mentor to current Labour leader Jeremy Corbyn. And under Corbyn, Labour once again has a transformative manifesto like Attlee’s in 1945. It once again offers hope of a better, fairer future.

The flames of “anger against injustice” and “hope you can build a better world” should not only inspire us this election day. They should also continue to drive us forwards, whatever the result may be.