Johnson wins not just the election, but the full backing of the far right around the world - Canary 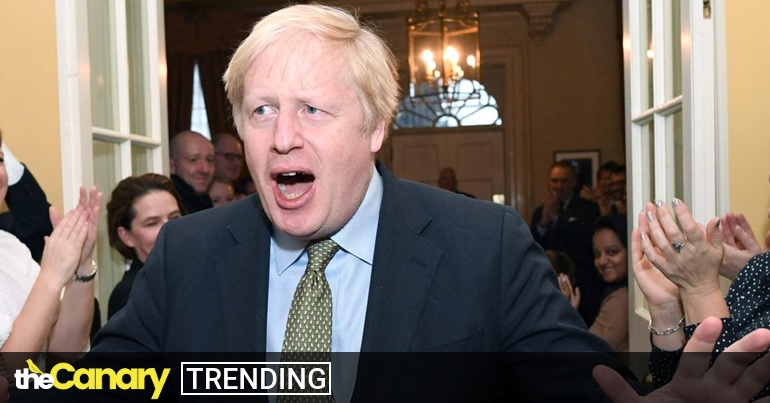 Thanks in large part to his Brexit promises, Boris Johnson has secured the biggest Conservative majority in parliament since Margaret Thatcher in the 1980s. And hard-right forces throughout the world have rushed to congratulate him.

The Conservatives got around 43% of votes, but about 56% of all MPs. Roughly two thirds of eligible people in the UK voted in the election.

He is now expected to reintroduce his Brexit deal in the Commons next week following the Queen’s Speech and State Opening of parliament on Thursday.

In the UK, Stephen Yaxley-Lennon (aka ‘Tommy Robinson’) – “the most high profile member of the far-right” – celebrated Johnson’s victory:

Within hours of their forming a large majority government at Westminster, the most high profile member of the far-right, ‘Tommy Robinson’, claims to have joined the Conservative party. pic.twitter.com/9bqgwx0YjU

Across Europe, there was also praise. Germany’s “far-right AfD”, for example, sent its congratulations to Johnson:

Johnson also has past links with Hungary‘s antisemitic Fidesz government, which some have called “probably the most reactionary Right-wing racist and homophobic government in Europe”. And Fidesz vice president Katalin Novák tweeted:

Congratulations @BorisJohnson+ waiting for the official results. #Conservatives have to become stronger in #Europe https://t.co/ys8VaxrMA5

Congratulations to Boris Johnson on his great WIN! Britain and the United States will now be free to strike a massive new Trade Deal after BREXIT. This deal has the potential to be far bigger and more lucrative than any deal that could be made with the E.U. Celebrate Boris!

And other hard-right leaders around the world joined in too:

Netanyahu's words, my emphasis: "Congratulations to my friend @BorisJohnson on your astonishing victory. This is more evidence that *the people decide, not the media. It's part of a global tidal wave* for secure borders, a free economy and sovereignty." pic.twitter.com/1reObvNjVc

Many congratulations to PM @BorisJohnson for his return with a thumping majority. I wish him the best and look forward to working together for closer India-UK ties. pic.twitter.com/D95Z7XXRml

“Today we mourn, but tomorrow we organise. The work starts now.”

The Tory Islamophobia crisis, meanwhile, seems to be out of control. Because despite the Muslim community’s repeated calls for an official inquiry, Johnson’s government has so far failed to investigate the crisis. Statistics have previously shown that 56% of Conservative Party members believe “Islam is a threat to the British way of life”.

Minority communities in the UK now fear what may be to come under Johnson’s majority government:

After @BorisJohnson saw a landslide victory , his party that has been accused of systemic Islamophobia, British Muslims have voiced fears about their future and security in the UK. https://t.co/rSjWA5q1mk

But a strong spirit of resistance is already starting to grow:

Our statement on the election results.

The task now, going forward, is for all progressives to unite firmly against all forms of discrimination, and to challenge what looks set to be one of the most regressive hard-right governments the UK has ever had.

I think progress has been made by two flames that have always been burning in the human heart: the flame of anger against injustice, and the flame of hope you can build a better world.

And we must keep those flames burning brightly in the coming months and years. Because hard times are coming.