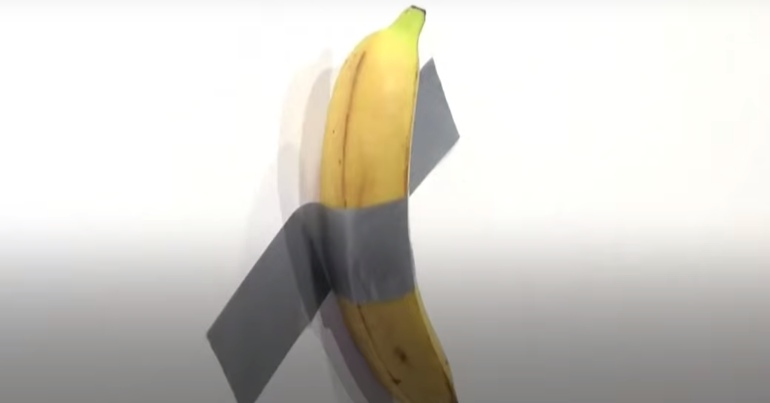 To say that much modern art is pretentious, ostentatious, and ridiculously priced would hardly be saying anything new. But one certain sale at this year’s famous Art Basel Miami festival has plunged things to new depths of absurdity. And with economic inequality at record levels, it’s worth putting things into a broader social context.

On Wednesday 4 December, two copies of a ‘work of art’ titled Comedian by Italian artist Maurizio Cattelan sold for $120,000 each. The price was nothing unusual for the annual Art Basel event. Galleries from around the world display paintings, sculptures and other works of art that often sell for even more. But what raised eyebrows was the fact that the piece consisted solely of a banana duct-taped to a wall.

The sales have made headlines both in the local Miami press and nationally throughout the US. And for many, the story represents peak absurdity of the world of modern art.

An illuminating metaphor for modern capitalism

But that’s not all. The high pricetag and low artistic merit of the ‘banana piece’ is a window into the dark soul of the capitalist system in the 21st century. To begin with, there is something seriously wrong when some people have $120,000 to spend on a banana duct-taped to a wall while others don’t even have a place to live. In the city of Miami, for example, homelessness numbers in the thousands (nationwide, the figures are in the hundreds of thousands). According to a 2015 research report, meanwhile, over 20% of households in Miami-Dade County live in poverty and around 60% of households don’t earn a living income.

It also shows how the capitalist system plays with people’s minds. The great US economist Thorstein Veblen coined the term ‘conspicuous consumption’ to describe the phenomenon of spending more money on goods than they are actually worth. For Veblem, members of what he terms ‘the leisure class’ do so in order to send signals about their (real or perceived) social standing to other members of society.

The case for socialism

The late Harvard University professor Richard Levins expanded on this idea by arguing that “the tastes and styles of a dominant class or society acquire a prestige far beyond any intrinsic value”. He adds:

in a society that isolates people from each other, the remedy for despair is shopping. People who have experienced poverty sometimes find safety in accumulating things. And the capitalist imperative to expand leads to gigantic sales efforts to promote those feelings while inventing new ways for people to get into debt. All of these dimensions feed into consumerism.

But for socialism, a rising standard of living is not unlimited consumption of energy and matter. Rather, it centers on a rising quality of life.

With cases of conspicuous consumption and levels of economic inequality reaching such absurd levels, it is high time that we heed Levins’s words. The need to build a socialist society in which the needs of everyone come before needless luxuries of a wealthy few is perhaps greater today than ever before.