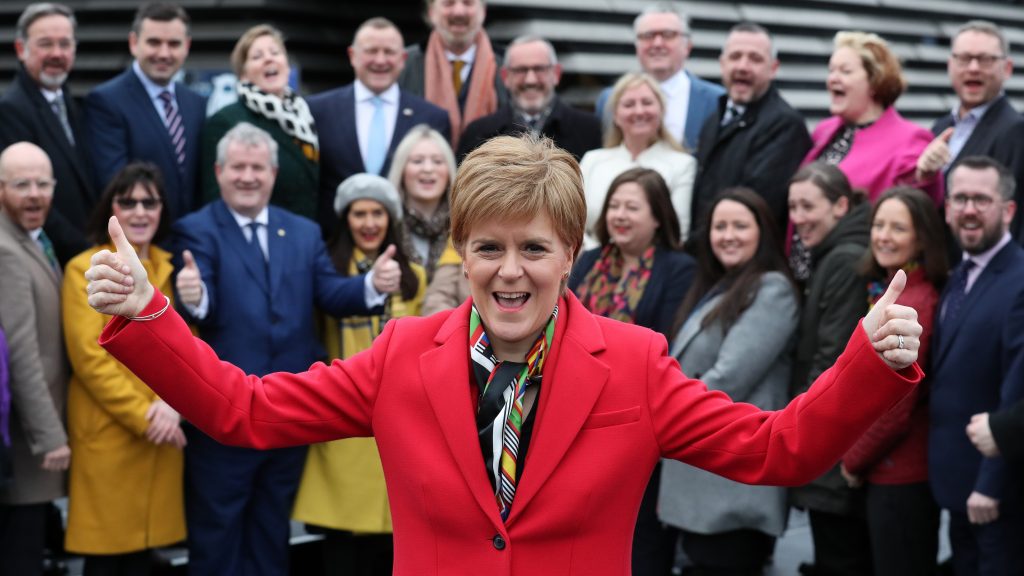 Boris Johnson cannot “bludgeon” Scotland into seeing the world in the same way that he does, Nicola Sturgeon has said.

She spoke with Johnson in a phone call on Friday following the election in which the SNP won 48 of the 59 Scottish seats.

Downing Street said that in the call, Johnson “made clear how he remained opposed to a second independence referendum”.

However, speaking at the V&A Museum in Dundee on Saturday as she joined her party’s newly-elected MPs, Sturgeon insisted it is unsustainable for the Tories to keep saying no to a fresh vote.

Of her phone call with the PM, she added:

I wasn’t sure how much he’d had a chance to catch up with the Scottish results.

I pointed out to him, politely of course after I congratulated him, that the Scottish Tories, having fought the election on the single issue of opposition to an independence referendum, had lost – lost vote share, lost more than half of their seats.

It was a watershed election on Thursday and it’s very clear that Scotland wants a different future to the one chosen by much of the rest of the UK.

Scotland showed its opposition to Boris Johnson and the Tories, said no again to Brexit, and made very clear that we want the future of Scotland, whatever that turns out to be, to be decided by people who live here.

It couldn’t really be any clearer from the results of this election that Scotland doesn’t want a Boris Johnson government, it doesn’t want to leave the European Union, and it wants to be able to determine its own future, whatever that future turns out to be.

Sturgeon said the United Kingdom will only continue to exist by consent. She continued:

This idea that the Tories can just say no and sort of imprison Scotland in a union against its will, I just don’t think will hold.

The union can only continue to exist by consent if the Scottish people want it to.

And you have to be prepared to allow the Scottish people to choose if you want to make the argument that it should be part of the union.

So if Boris Johnson has confidence in the case for the union and the UK, and for Scotland staying part of that, he should have the guts to make that case and let people decide because he won’t get away with just saying no and trying to bludgeon the nation of Scotland into seeing the world as he does, which most of us don’t.

There is no doubt that the prospect of a Boris Johnson government for the next five years is worrying for people.

It’s a grim reality and in my view, it makes that case for Scotland being able to choose something different all the more urgent and all the more important.

Following a dismal night for the Labour Party in the election, Sturgeon added: “I think Labour have got some deep soul searching to do before anybody knows the direction they’re going to take”