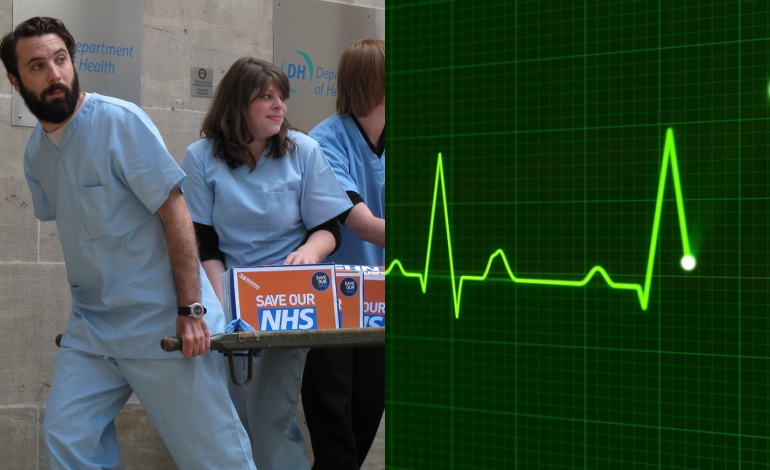 It’s difficult to ignore headlines about the ongoing NHS crisis. But data and statistics take on new significance as a patient rather than a journalist. We hear that patients are treated in corridors, that ambulances are backed up, unable to get patients into crowded A&E departments, that the elderly are sent to hospital in desperation. But I witnessed this first hand and it revealed just how fragile the NHS really is, and also why we must fight harder than ever to keep it.

An MRI diagnosed that I’d had a small stroke. GP surgeries are facing a workload and funding crisis so I feel incredibly lucky that this was picked up by my GP. Although overwhelmed by the stroke ‘system’, I know that were it not for the NHS, I couldn’t afford the tests needed for diagnosis.

A few weeks later, I experienced similar symptoms and sought medical advice. It was Sunday morning, so I called 111.

From the moment I called ‘Linda’ from 111, I knew I was in trouble. NHS Direct, the non-emergency medical helpline closed in 2014. It was replaced by 111. But there are concerns about the lack of medically trained staff running 111 helplines.

I can confirm that ‘Linda’ had no medical training. She did little more than insist I gave my phone number. I didn’t have a clue what my phone number was; if ‘Linda’ had been medically trained, this would have triggered a few alarm bells. The 111 system actually felt dangerous.

I’ve nothing but praise for the ambulance service and the paramedics who took me to A&E. In fact, I wish I knew their names to thank them personally. Not least because 999 calls are at an all time high, paramedics are under increasing pressure and many are leaving the profession.

The emergency in A&E

You can hear a lot from a room in A&E.

Every two or three minutes, a lonely male voice called out “Help me… Help me”. My instinct was to sit with him, to hold his hand. I was told not to. And no one else went to him either. He called out like this for over five hours.

From another bay, a male Glaswegian voice boomed out a tirade of expletives and insults. To be fair, some comments were amusing. And accurate. But to the overworked staff, they were far from funny.

I overheard a heartbreaking examination of an elderly lady. The consultant told her son that if she suffered a heart attack they wouldn’t resuscitate.

There was a lot of time to listen, because no one came to see me. I had time to recognise that every single patient there was elderly. There was enough time for me to realise how many patients suffered from dementia.

I also heard staff mentioning that the corridors were full. A few hours later, I overheard they were treating people in ambulances. When I eventually left, corridors were still full. Everyone waiting was elderly.

An accident waiting to happen

Until that point, these were ‘concepts’ that I’d only read and written about. In January 2017, the Red Cross said the NHS was facing a “humanitarian crisis” and deployed help in A&E departments. But this was just an ‘ordinary’ Sunday in A&E.

The knock-on effect of the sheer number of patients there that day led to a catalogue of disasters. I’m sure they could have discharged me earlier to free up the room, but my notes were lost three times. Records were made of drugs I was never given.

But that’s not really what matters. And I don’t blame a single member of staff. They were working flat out under impossible conditions. My twelve hours in A&E showed a system at breaking point. But it’s also a system that saved my life.

Four days after my visit, this hospital went into special measures.

– Write to your local MP to demand that they protect the NHS.