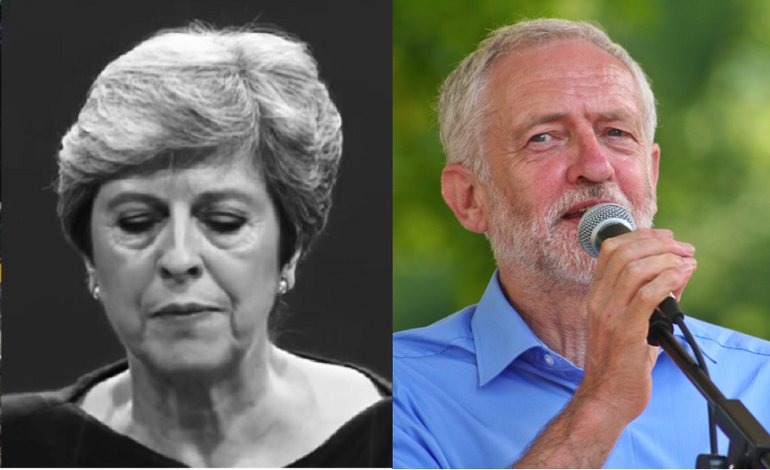 With the May government lurching from crisis to catastrophe, there is a vacancy for a real leader in 10 Downing Street. And throughout the course of the last week, Labour leader Jeremy Corbyn demonstrated he might just be the man for the job.

When David Cameron ushered in ideological austerity, he promised “we’re all in this together”. But research by The Equality Trust shows that, when it comes to paying our taxes, this isn’t the case. A tax system designed by millionaires for millionaires now means that the poorest 10% are paying a higher percentage of their income in tax than the richest 10%.

By 2014, the estimated gap between taxes due and taxes paid had grown to £119bn a year for the UK. To put this in perspective, the entire annual budget for the NHS will be £122bn for England in 2017/18. In short, we could run the NHS for almost a whole year on just the missing taxes. But rather than crack down on tax avoidance, the Conservatives have dished out further tax cuts. And instead of working to close the tax gap, Conservatives have been underfunding and selling off public services instead.

Our manifesto, For the Many Not the Few, set out a fully costed programme to build an economy which gives everyone the chance of a secure and fulfilling life.

Labour also announced a plan to get £37bn of that money back in the public purse.

The same wealthy companies that are avoiding their taxes are also getting billions a year in dividends from privatised public services. Speaking in Lincoln on Saturday 11 November, Shadow Chancellor John McDonnell said:

These figures show what could have gone into investment in these public services in order to expand and improve them or keep their charges down.

Labour will bring these companies back into public ownership, so that the dividends benefit the people using the services.

On 14 June 2017, Britain watched in horror as Grenfell Tower burned. At least 80 people died in the blaze.

Investigations into the fire found that the cladding on the tower was unsuitable. It would have burnt as quickly as petrol, and at temperatures in excess of 1000 degrees. And the BBC found this cladding was chosen (despite safety concerns) to save the private owners of the tower £300,000. While the potential fire risk was increased, safety measures in the building design were removed. The building was modified to have just a single stairway, meaning only one means of escape in case of fire. And while sprinklers could have saved lives that night, the building was not fitted with any. The London Fire Brigade released a video showing the difference that sprinkler systems make on a fire burning at 1000 degrees:

Sprinklers are the only fire safety system that detects a fire, suppresses a fire and raises the alarm.

They save lives and protect property and they are especially important where there are vulnerable residents who would find it difficult to escape, like those with mobility problems.

Despite these calls, Theresa May told MPs that Britain cannot afford £1bn to install sprinkler systems on similar tower blocks.

In 2016, the May government gifted £1bn of public money to the already booming oil and gas industry. So it seems a matter of priorities rather than affordability. And last week, Jeremy Corbyn confirmed that safe homes are a priority for Labour. He launched the Make Homes Safe campaign to fund sprinklers in all social housing in Britain that stands at 30 metres or higher. So far, more than 60,000 people have signed up to the campaign pledge.

Delays in benefit payments have stretched routinely from six to 12 weeks, leaving claimants in dire straits. And according to the Trussell Trust network of food banks, “issues with a benefit payment remain the biggest [43%] cause of referral to a food bank across the UK”.

Inside these statistics are real people. Like partially paralysed stroke sufferer Chris Gold, who died while waiting for his Universal Credit payment. Before Gold passed away, he said he felt like he’d “been hung out to dry” and that he hadn’t been eating. And former nurse Ann Cumberland-Quinn has been living in her car and eating from bins. Despite a neurosurgical diagnosis of paresthesia, the Department for Work and Pensions assessed her as fit to work and cut her benefits.

The May government has refused calls from across the charity sector to pause implementation until these problems can be solved. Last week, Jeremy Corbyn called on the government to announce the pause in the forthcoming budget. Speaking in Consett, County Durham, on Saturday 11 November, Corbyn said:

The Government has a great opportunity on Wednesday week, which is the Budget.

Why don’t they say: ‘We have looked at it, we have listened, we have heard the hardship, we are going to pause the roll out?’

We must pause and fix Universal Credit now, before millions of people are made worse off.

The May government is giving Britain little but chaos at a time when the country needs creative, compassionate and committed leadership. And it seems Labour has moved from opposition to a government-in-waiting.