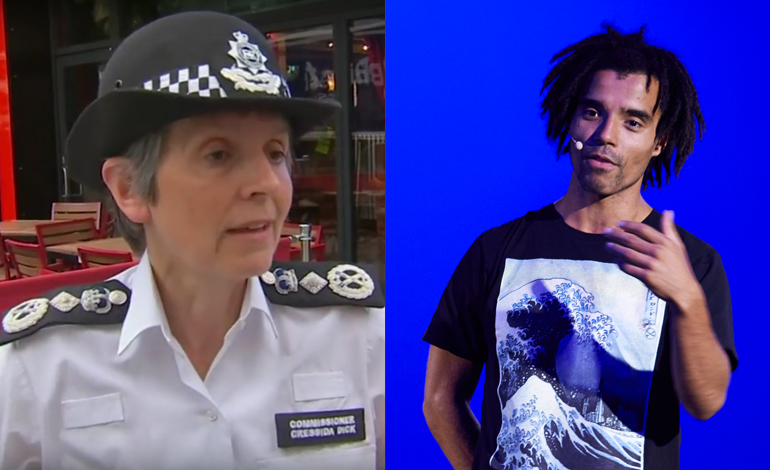 British rapper Akala has hit back at Metropolitan Police chief Cressida Dick for “crude” comments about ethnicity and crime. Dick, speaking at an annual general meeting for prison reform group The Howard League, suggested “harsher, more effective sentencing” for teenagers could be an effective deterrent to street violence in the capital.

Frances Cook, chief executive of The Howard League, points out that the “direct inference from [Dick’s] comments was that this would impact on young black boys living in London”. And Akala criticises both Dick and the media for emphasising a “social darwinian racial explanation for crime”.

Dick’s talk to The Howard League highlighted the ethnic background – 21 black and three Asian – of 24 London teenagers murdered this year. And for Akala, this is the dog-whistle for making the link between ethnicity and crime:

The Commissioner was briefed about the Howard League’s work that has resulted in a two-thirds reduction in child arrests across the country, and she was invited to talk about the work of the Met… Cressida Dick’s exposition did not… provide a considered understanding of the research and the lived experience of young black (and young white) people in London.

And Akala points out that Dick’s views – and reporting by the media – don’t help those that need it:

The rapper also suggests there might be bigger issues at play.

Akala points to social and economic reasons for violent crime by teenagers, which can statistically be confused for ethnic factors:

In particular, he mentions that Black African teenagers have consistently gained better GCSE results than white teenagers since 2013. And this appears to be backed up in a 2016 report by the University of Leicester. Yet successes like these are rarely attributed to ethnic background:

Britain's brainiest family is black (the Imafidons) was race emphasises in the reporting? (do a search)

Teenagers aren’t afraid of ‘the state’

Dick appears not to have acknowledged reasons of class during her speech, instead saying teenagers are “simply not fearful of how the state will respond to their actions”; the implication being that harsher sentences will make prisons scary again.

2017 has already seen a surge in imprisonments, leaving nearly every prison in the UK filled. Youth jails have also experienced a “staggering” decline in safety.

Akala points out that the failure of the ‘tough on crime’ approach elsewhere should itself be a deterrent from putting more teenagers in jail:

Akala says he has a “programme… that would cost a fraction of prison”. And alternatives to prison, rather than gearing up the prison system, seem the best option for the future.

As the UK prison system continues to burst at the seams, the logic of putting more teenagers in prison is incredibly faulty. And given high numbers of assaults in prison – more than 27,000 incidents between January and June 2017 – it really doesn’t seem like the best solution for deterring violence.

– Listen to Akala talk further about the prison industrial complex.

– Look for screenings of recently released prison documentary Injustice near you.

– You can also read more about prisons and criminal justice at The Canary.