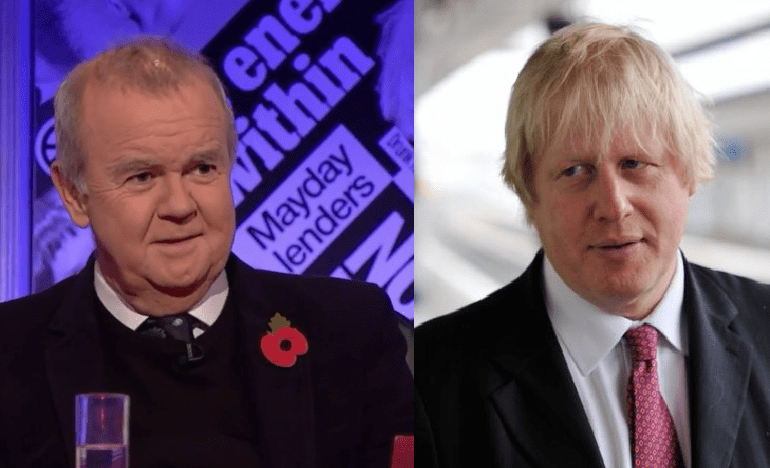 Ian Hislop has nailed why Boris Johnson should be sacked in the funniest way going on Have I Got News For You. The Foreign Secretary has hit the headlines recently for making a horrific situation even worse for Brit abroad Nazanin Zaghari-Ratcliffe.

Iranian authorities arrested Nazanin Zaghari-Ratcliffe in April 2016 when she went to Iran with her daughter on a family holiday. Her family and employer maintain her innocence and claim she is being used as a political pawn.

Recently, Johnson inaccurately claimed that Zaghari-Ratcliffe had been “teaching people journalism” in Iran. Iranian authorities then seized on Johnson’s remark to justify Zaghari-Ratcliffe’s imprisonment. As a result of Johnson’s comment, she has been threatened with double her prison sentence, which already stands at five years.

Speaking about Zaghari-Ratcliffe, Hislop noted [0:27] how Johnson has failed in a fundamental duty:

The one thing you’re meant to feel as a British citizen going round the world is that, if you get into trouble, then the foreign office will be backing you and be on your side and it won’t put up some idiot who reinforces your sentence by another five years.

He’s had to face the woman’s husband… not the first irate husband Boris has presumably had to face, who’s unbelievably cross about it.

Zaghari-Ratcliffe’s husband now says that Johnson’s comments have left her ‘angry and in tears’. He also told The Guardian that she is on the brink of a “nervous breakdown”.

On Have I Got News For You, host Victoria Coren Mitchell then moved [1:41] the conversation onto Theresa May’s government as a whole:

So is this the end of the government? Priti Patel’s gone. Michael Fallon’s gone. Boris might go. Damian Green might go…

Damian Green might go? Look at all that talent being lost!

With Green, Patel and Fallon, it’s certainly a difficult competition. But Johnson just might be the most farcical minister of May’s administration. And Hislop was spot on to go to town on the Foreign Secretary. Johnson should be sacked immediately.

Featured image via screenshot and N04