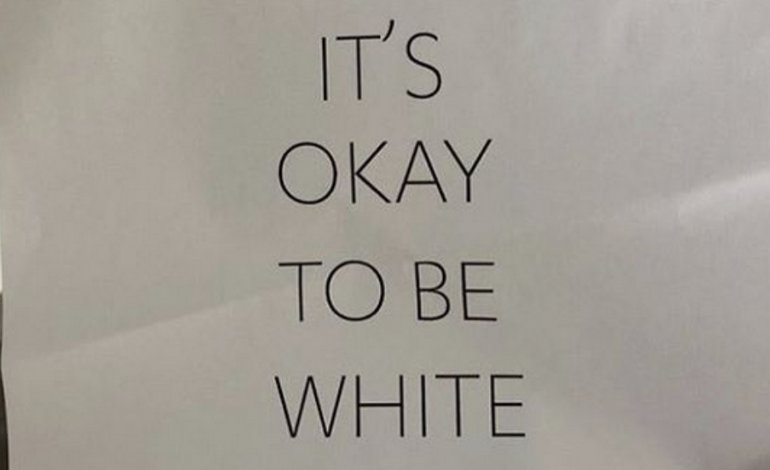 White supremacists are putting up “it’s okay to be white” signs across US towns and cities. In many locations, the signs bear links for white supremacist blogs.

The signs have been spotted in various towns, cities, and even high schools and college campuses across the US. As The Washington Post reports:

the posters have been spotted in Rocky River, Ohio; at Concordia College in Moorhead, Minn.; at Tulane University in New Orleans; at Montgomery Blair High School in Silver Spring, Md; around college-campus rich Cambridge, Mass, including the Harvard Yard and at the University of Alberta in Canada. In most cases, schools and cities have pulled the posters down, but the message has continued to spread in images and hashtags across Twitter and other social media platforms, even prompting a related Know Your Meme entry detailing its Internet origins and cultural backstory.

Users of 4chan kicked off the campaign in October, aiming to trigger a liberal shitstorm about white supremacy. Of course, they didn’t bank on the reaction of actual white supremacists. Neither did they give too much thought for the daily abuse and violence meted out to non-white Americans by white supremacists.

Far-right demonstrators in the Portland area decided to throw an "It's Okay To Be White" rally on the anniversary of one of the city's most brutal hate crimes — on Nov. 13, 1988, neo-Nazis beat an Ethiopian immigrant to death w/ baseball bats. https://t.co/9aNKo4EcrB

When did it not become okay to be white? Last time I checked being Black on campus means you get murdered. #UMD pic.twitter.com/M8qoBMeEGm

It’s okay to be whatever you are

Of course it’s okay to be white. It’s okay to be whatever ethnicity you happened to be born as. But these signs aren’t about embracing diversity. They are about the simmering anger white supremacists feel about even acknowledging, let alone challenging, the privileges that come along with ethnic inequality. Losing privileges, however, is not equivalent to being refused the basic rights that others enjoy.

Having to think twice before using racist slurs is not an equivalent burden to being refused an interview because of your ethnic-sounding name. Facing an angry protest as you shout antisemitic slogans at a far-right rally is not equivalent to being gunned down by the police because of your skin colour. The inter-ethnic marriages that they consider ‘white genocide’ are not equivalent to the literal genocides that litter human history. And “it’s okay to be white” is not a witty retort to the Black Lives Matter movement. The former is the petulant reaction to a much-needed conversation about ethnic inequality; the latter is a direct action movement fighting against ethnic inequality.

That’s why these signs, and the people who post them, are part of the problem. Instead of crying foul, they could be uniting to tackle ethnic inequality. And instead of prioritising petty grievances, they could be helping to bring us together. Because with all the challenges humanity faces today, we need all the cooperation we can muster.

– Support the work of the Hope not Hate campaign.

– If you see or hear prejudice in action, be a powerful ally and call it out.

– Challenge your own prejudices. It’s not a chore; it’s a great way to learn and connect with people beyond arbitrary distinctions like ethnicity or sexuality.