Theresa May made a major mistake in her Lord Mayor's speech. We've fixed it for her. [VIDEO] - Canary 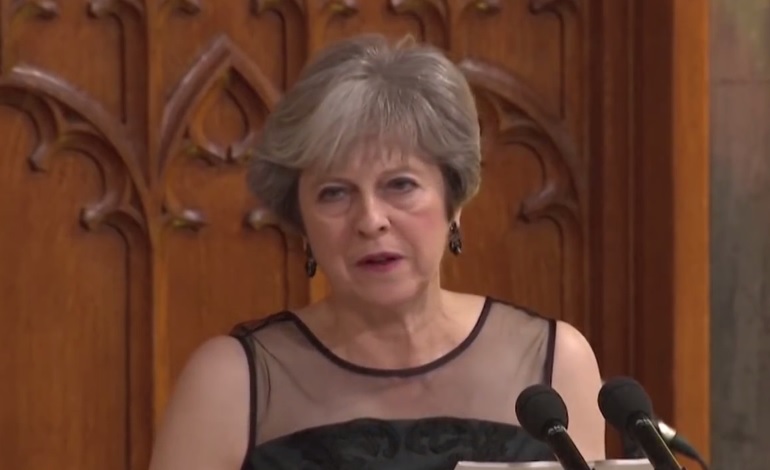 Prime Minister Theresa May made a speech at the Lord Major’s Banquet on 13 November. But she made a major mistake in it (something that’s not uncommon in her cabinet these days). So we’ve fixed it for her.

During the event in the City of London, May talked about Britain’s role in solving the current problems in Asia. In particular, she said [17.40] that means:

continuing to step up our efforts to respond to the desperate plight of Rohingyas, brought home to us again on our TV screens so rapidly today, with heartbreaking images of young children emaciated and pleading for help.

This is a major humanitarian crisis which looks like ethnic cleansing. And it is something for which the Burmese authorities, and especially the military, must take full responsibility.

May was right to raise the Rohingya crisis. Around 600,000 Rohingya muslims have fled to Bangladesh since late August. And the accounts of brutality by the Burmese military, which led to the crisis, are appalling. Stories of rape, child murder, and arson by the military are commonplace.

But much of what May said about Myanmar (Burma) is also true of Yemen. The conflict there is now well into its third year; except in that country, it’s not the Burmese military that’s responsible for the “desperate plight” of civilians, it’s Saudi Arabia.

May, however, only made a brief mention of Yemen in her speech. Noting “instability” in the Middle East, she said [10.00]:

We see the spillover effects of this instability in the challenge of mass migration and humanitarian crises in countries like Yemen.

But she made no mention of who should take “full responsibility” for the crisis there. She didn’t talk about the “heartbreaking images of young children emaciated and pleading for help” in Yemen. Even though there’s recently been plenty of upsetting images coming out of the country.

This is happening right now in #Yemen – the ABC's producer in #Sanaa just filmed this on the weekend. UN says if #Saudi doesn't lift the blockade it "could lead to worst famine in decades & millions could die" #wecantsaywedidntknow pic.twitter.com/jCQRv7TLtf

"It will be the largest famine the world has seen in many decades, with millions of victims."

Yemen is arguably facing the world’s most severe humanitarian catastrophe right now. But politicians can’t really condemn the situation without calling out Saudi Arabia. Because it is largely responsible for what’s happening in Yemen. The contempt Saudi Arabia shows for Yemeni people’s lives is scandalous. It has stopped organisations bringing aid in via land, air or sea, even though seven million people there are on the brink of famine.

Yet May didn’t acknowledge this. Perhaps because, as she said in her speech, whatever Britain now ‘offers’ to the Middle East supports the “longterm security and prosperity of our key partners”.

It appears the UK government has Saudi Arabia’s back, through feasts or Yemeni famines.

The Prime Minister did challenge one further country, though. And she recited [6.12] the words of a recent speech by that country’s leader, in order to make her discontent known:

While the interests of states do not always coincide, strategic gains cannot be made at the expense of others. When a state fails to observe universal rules of conduct, and pursues its interests at any cost, it will provoke resistence and disputes will become unpredictable and dangerous.

May said she agreed with this edited statement by Vladimir Putin. And she accused Russia of ‘threatening’ the universal order. But she picked an ill-advised quote. Because just like her comments on Myanmar, these words apply to Saudi Arabia. Its “strategic” proxy war with Iran (a major reason why it’s bombing Yemen) is at the expense of Yemeni civilians. It is ‘failing to observe universal rules of conduct’ by killing children and blocking aid from getting in. And it’s ‘pursuing its interests’ at a monumental cost to human life. For these reasons and more, Rutgers University’s Toby Jones recently called Saudi Arabia “the most dangerous actor in the Middle East”.

No criticism of Saudi Arabia made it into May’s speech, though. Instead, it ran along the same old tired lines. May essentially ignored atrocious behaviour by Britain’s allies, and focused on what its perceived enemy is doing. But that’s a grave mistake. Because it’s hard to believe a politician sincerely cares about the “desperate plight” of anyone if they cherry-pick their concerns in line with geopolitical games.

– Take action with the Stop the War Coalition; and show your support for Veterans for Peace and the Campaign Against Arms Trade.