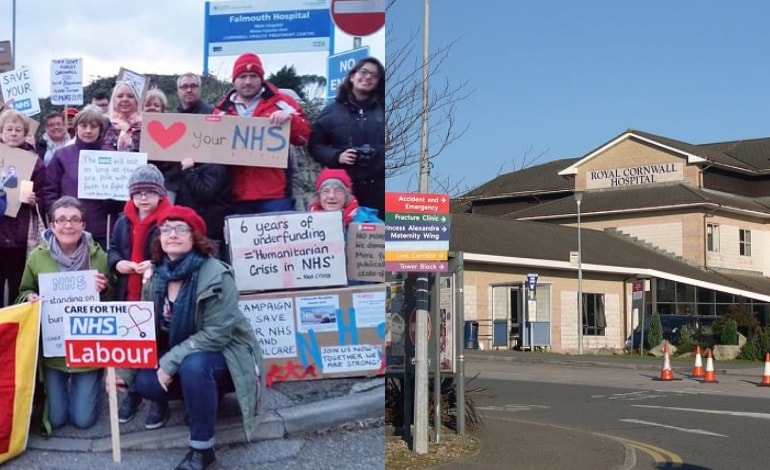 Cornwall’s main hospital has gone into special measures. The Care Quality Commission (CQC) report on the Royal Cornwall Hospitals NHS Trust (Treliske) followed an inspection in July. And the report “uncovered a catalogue of serious failings”. But no matter how hard NHS staff work, they have faced a ‘perfect storm’ of cuts to local services and an increase of contracts to private companies. And a source told The Canary that the impact of this report could be:

the end of the NHS in Cornwall. Don’t say we didn’t warn everyone.

The report, published on 5 October, found services “inadequate” for an NHS trust that serves over 500,000 people. But hospitals in Cornwall also serve a huge influx of tourists. And as Jeremy Corbyn noted in a recent visit to Cornwall:

The summer population is closer to 1 million and all those people need to know there’s a hospital there to care for them.

But this influx of visitors is not fully acknowledged in terms of funding for the NHS in Cornwall. In July, ahead of this latest move to special measures, NHS Kernow was rated “inadequate”. And the problems don’t stop there.

The Conservative government has introduced plans for Sustainability and Transformation Partnerships (STPs) across the NHS. The Canary gave a detailed analysis of STPs here. STPs emerged from the Five Year Forward View (5YFV). This was drawn up by Simon Stevens, CEO of the NHS, who previously worked in private healthcare in the US. One of the main objections to STPs is that they are seen to be another means of privatising the NHS. Critics have described them as a “wish-list for privatisers”.

And because these plans advocate the integration of health (NHS) and social care, this creates more problems. The NHS, free at the point of use, is not means tested. But social care is means tested. And since the Tories have been in power, huge cuts [pdf] to local government and a 27% drop in social care funding have left the system in crisis.

The CQC report in July highlighted:

the experience of people moving between hospitals, social care and their own homes was often not good enough. The review has concluded that the services need to make urgent and significant change to improve…there was a higher rate of delayed transfers of care in Cornwall than in similar areas.

According to local activists, a huge NHS trust in Cornwall has been run into the ground. And this is largely due to an increase in private contracts (or tenders) and a lack of funding for the elderly and those needing social care. A healthcare worker in Cornwall told The Canary:

Devastating funding cuts in health and local government have caused the crisis at Treliske. This started with difficulties in providing community care as the council was forced to tender out services. But this change was created by Westminster legislation. Since 2012, services now have to go out to tender and most seem to go to private tender. It is becoming more and more difficult for the NHS to retain or get new tenders. Some private companies don’t pay tax in the UK, so our public funding doesn’t go back in. They are taking money away from the NHS every day.

As funding, particularly for the elderly, has decreased, more pressure has been put on hospitals. And although this is a pattern that has been seen across the UK, the implications in this county have been devastating. Because the knock-on effect of the “special measures” coincides with the push to STPs. Cornwall Council is [pdf p199] a “key partner” for the STP. But there are concerns about the council’s record for dealing with a falling budget:

Fund management in Cornwall has been inadequate, at the worst professionally incompetent.

As a source said:

Councillors are trying to take over Health services in Cornwall. This is the same council that has an appalling record of community care. Although this is as a result of cuts from Westminster, people in Cornwall are suffering.

And fears have been expressed locally that this step could mean even more NHS services are put out to tender.

Special measures are new to Cornwall. It means we are likely to experience the sharp edge of this regime, swiftly administered by the government’s henchmen. Now the service has been run down sufficiently, it is ripe for dismantling. The cherry pickers have already taken what they can in terms of services that can run for profit. What is going to be left? Very little is my guess.

And another source explained to The Canary:

In Cornwall, services that have gone out to tender have been those that are profitable. Those that lose money, like end of care life and complex surgery, don’t make a profit. So the NHS has been left to foot the bill.

We stand with you

But what has emerged since the announcement is strong local support from the local community for all those working within the NHS trust. A source told The Canary:

Mainstream media reports imply that staff are to blame. This is not the case. Government cuts mean wards have closed and there are not enough beds. In Cornwall, there is a critical shortage of nurses; over 100. And we also need another 26o FTE [full time equivalent] healthcare workers across the county. Staff do an incredible job in an impossible situation.

And another source said:

NHS staff have stood by Cornwall and now Cornwall needs to stand by those staff.

At the time of writing, only two of the seven Tory Cornish MPs had made statements in response to this report. The Canary also contacted the Department of Health and the NHS for comment, but did not receive a reply.

But there is a possibility that this report could be another signpost along the road to the end of the NHS as we know it. We need to act now to protect it.

– Write to your local MP to demand that they protect the NHS.

– Find out more from Stop the STPs.