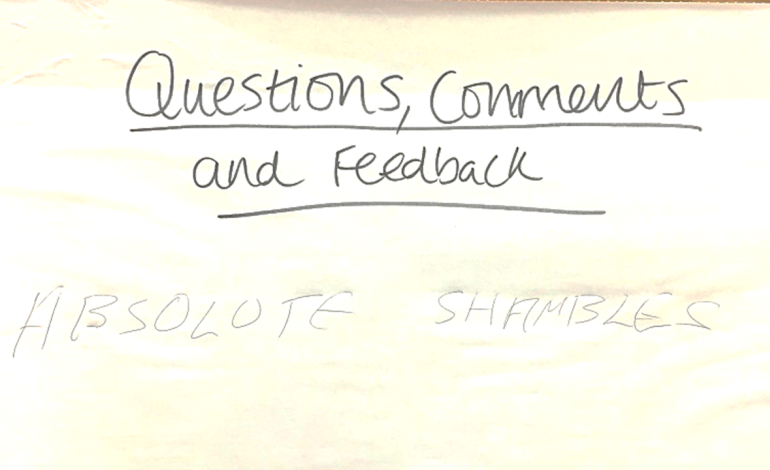 An NHS consultation meeting on its Sustainability and Transformation Plan (STP) descended into shambolic chaos in Penzance, Cornwall. The meeting showed that NHS executives are underestimating the strength of feeling in local communities. And that the anger and commitment to the NHS from communities might be what saves it.

Around 400 people attended the meeting on Tuesday 10 January. The organisers did not predict so many would show as it was standing room only. And they ran out of copies of the consultation document on which they wanted people’s feedback.

The meeting started badly and didn’t get better. Organisers failed the basic rule of event organisation – check the PA system. The following ten minutes consisted of people shouting that they couldn’t hear and giving microphone technique tips to Director of Communications, Garth Davies. Eventually, he gave up and didn’t use the PA. Also, there was no remote microphone provided, so it was equally hard to hear contributions from the floor. And there were many.

Davies had a plan for the meeting. It was to deliver some corporate spin about the six areas of transformation. And then to get people to break off into two of the areas they were most interested in discussing further. But the somewhat rowdy crowd wasn’t having it. Instead many pointed out that they wanted to discuss the current crisis facing the NHS, and how services can possibly be improved when millions of pounds are being slashed from the budget.

When Davies tried to get people to “break out” into groups, people shouted at him angrily. And the gathered public forced him to respond to more questions. As one local woman pointed out:

You’re not listening to anybody. You’ve come out with a load of business type platitudes. You’re treating us like we’re idiots. We are the community. These are our services you’re messing about with.  I don’t want to play pin the tail on a donkey at a table. I’m not at a jobs fair. I’m here to discuss the future of the NHS.

The consultation is asking people here this evening whether they agree there should be more prevention of ill health. Whether we want to achieve better care, better productivity, more integration. Well, no-one’s going to object to that. The question really is – which you don’t include in this paper – is to explain how you’re going to save £264 million?

Davies was unable to answer, simply saying the plan was in its “early stages”.

You can watch part of the meeting here:

What’s the problem with STPs?

The NHS is developing STPs across the country with the aim of:

set[ting] out practical ways for the local NHS to improve NHS services and health outcomes for people in every part of England.

But as previously reported in The Canary, NHS England has divided the country into 44 “footprints”, each of which must produce an STP. These are essentially restructuring plans, aimed at saving money. NHS England wants to make £22bn of ‘efficiency savings’ by 2020.

Additionally, campaigners view STPs as another means of privatising the NHS. Critics have described them as a “wish-list for privatisers”. And as campaigners told The Canary:

In short STPs are key to cuts, privatisation, and central control over the NHS and social care, as the plans have to eliminate any deficits –  which will surely involve cuts to services and closures. The government [is already committed to] encouraging long term NHS partnerships with the private sector in key areas.

As part of the plan, community consultations are happening around the country. These are meant to let communities have a say over how services are run. And have NHS executives hear their views. But as the meeting last night proved, they are nothing more than a marketing farce.

Speaking to The Canary, Andrew George summed up the problem:

Regarding the handling by executives of the meeting, George said:

I don’t think they really thought it through because I think they thought they could shepherd people into these six groups and then narrow the conversation.

And this is exactly the problem with these consultations. Executives frame the debate in such a way to produce the desired answers. But the people of Penzance did not want to participate in their farce. Halfway through the meeting, Davies completely lost control and the majority of those present walked out in disgust.

This image summed up what people felt about the meeting:

It’s fair to say that NHS executives did not ‘consult’ the people of Penzance and Penwith at the meeting. And even if they had, it was unlikely to have any impact. A member of the public asked Davies whether the plan would be adjusted if only negative feedback was given. He could not answer the question.

Local people came in their hundreds because they care about what is happening to our NHS. They care that there’s a shortage of beds. They care about proposals that Urgent Care Centres could close. And they don’t want to see further privatisation of the NHS.

The strength and the passion of the meeting was evident. And this was just one small coastal town. People are replicating that passion across the country. And if we can all work together, it is us – the affected communities – who can transform and save our NHS.

The Canary contacted Garth Davies for comment but did not receive a response.

– Join the Emergency Protest to Rescue the NHS on 12 January in London.

– For those in Penwith, Andrew George has organised a public meeting – What future our NHS? on 18th January, 7:30pm at the Exchange Gallery.