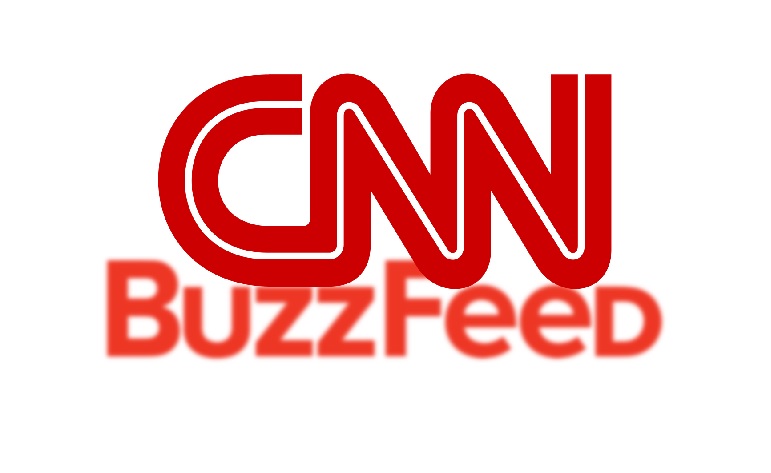 In response to BuzzFeed‘s publication of an unverified dossier relating to Donald Trump’s ties with Russia, CNN has just thrown its competitor under the bus. In an attempt to stress its own commitment to “carefully sourced reporting”, it has slammed BuzzFeed passive-aggressively on Twitter. Why? To hit back at Trump’s accusations that CNN has embraced “fake news”.

At his first press conference as President-elect on 11 January, Trump apparently accused a CNN reporter of working for a “fake news” organisation:

On 10 January, CNN published an article in which it detailed a report from US officials that Russia had information it might use to blackmail Trump. It and other media outlets, however, stressed that the intelligence dossier included unverified information.

BuzzFeed News then published the document in full. A dossier that it described as “explosive” and “unverified”. And one that it freely admitted “contains errors”. Several news outlets immediately questioned whether BuzzFeed‘s actions were unethical or irresponsible.

CNN soon released a statement on Twitter, clearly trying to distance itself from BuzzFeed. It insisted that its own reporting was “vastly different” from BuzzFeed‘s “decision to publish unsubstantiated memos”:

Now, it seems like BuzzFeed wants to avoid an even bigger conflict with CNN:

The danger of publishing unverified information

Glenn Greenwald, the journalist who helped to publish Edward Snowden’s leaked government documents, slammed both BuzzFeed and CNN for reporting on “a completely unvetted and unverified document”, saying:

Not only was its author anonymous, but he was paid by Democrats (and, before that, by Trump’s GOP adversaries) to dig up dirt on Trump. Worse, he himself cited no evidence of any kind, but instead relied on a string of other anonymous people in Russia he claims told him these things. Worse still, the document was filled with amateur errors.

None of this stopped Democratic operatives and prominent media figures from treating these totally unverified and unvetted allegations as grave revelations.

The big danger of this strategy, he insists, is that:

this maneuver can harshly backfire, to the great benefit of Trump and to the great detriment of those who want to oppose him. If any of the significant claims in this “dossier” turn out to be provably false… many people will conclude, with Trump’s encouragement, that large media outlets (CNN and BuzzFeed) and anti-Trump factions inside the government (CIA) are deploying “Fake News” to destroy him. In the eyes of many people, that will forever discredit — render impotent — future journalistic exposés that are based on actual, corroborated wrongdoing…

It is not automatically the case that CNN and BuzzFeed are ‘fake news’ outlets just because they arguably made a mistake in publishing the unverified information in question. All organisations, and all people, make mistakes from time to time. But as Greenwald insists, the best way to truly beat Trump is to ensure that all exposés are based on strong, verified information. We shouldn’t relax this position just because we dislike and disagree with Trump. As Greenwald says in a separate article:

By all means: Let’s confront and defeat the menace of Fake News. But to do so, it’s critical that one not be selective in which type one denounces, and it is particularly important that one not sanction Fake News when it promotes one’s own political objectives. Most important of all is that those who want to lead the cause of denouncing Fake News not convert themselves into its most prolific disseminators whenever the claims of a Fake News account are pleasing or self-affirming.

That’s a challenge the whole media world must rise to in the coming era of Trump.

– See other Canary articles about Donald Trump and the US elections at The Canary Global.