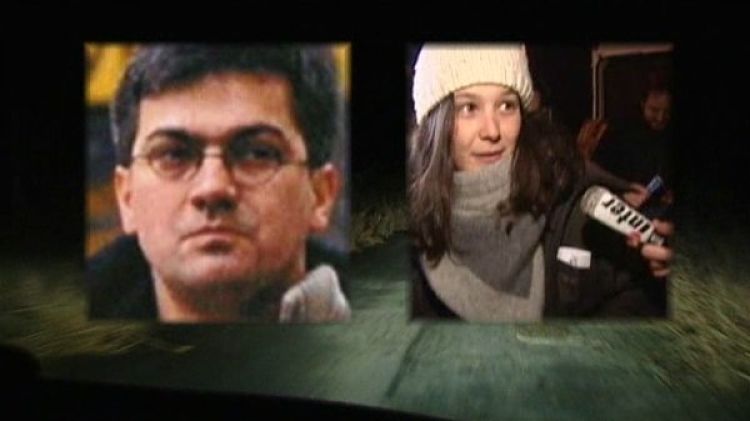 The court dismissed [French] the appeal filed by the Public Prosecutor’s Office and the SNCF (French railways). It ruled [translation] that:

There are insufficient charges to show that the offences were committed by any individual or group whose purpose was to disturb public order, to intimidate, or to cause terror.

The Canary can reveal that, in January 2016, a UK source provided the defendants with crucial evidence implicating Kennedy and his police supervisors in the case.

The Tarnac 9 were four men and five women, aged 22 to 34, who were environmental activists. French authorities were investigating them, and subsequently arrested them after a series of dawn raids in November 2008. The operation was dramatic.

It involved helicopters, 150 balaclava-clad anti-terrorist police, and massive media coverage. After the raids and arrests, major demonstrations took place in cities across France, demanding the release of all the detainees.

Those arrested included a Swiss sitcom actor, a distinguished clarinetist, a student nurse, and Benjamin Rosoux – an Edinburgh University graduate who runs the grocer’s shop and its adjoining bar-restaurant in the village. These anti-consumerists owned no phones and lived simple lifestyles.

The authorities named Julien Coupat as the ‘leader’ of those arrested. They also alleged that he was the author of a textbook, published by the “Invisible Committee of the Imaginary Party”, called “The Coming Insurrection”.

Authorities accused the Tarnac 9 of vandalising property of the French railways (causing delays to trains) and of “criminal association with aims of terrorism“. By August 2015, only four people were still facing charges – Yildune Levy and Julien Coupat (see featured image) and two others.

The French Special Branch allegedly described Coupat as a “critical metaphysician” and an “anarcho-autonomist”. Coupat also wrote a dissertation on the ‘Situationist‘ Guy Debord, who was influential in the May 1968 revolt in Paris.

The defence team representing the Tarnac 9 long argued that the legal case made against their clients was predicated on Kennedy’s role in the French operation. William Bourdon, one of the lawyers, stated:

The use of an individual like Mark Kennedy is an extremely serious problem for the state of law, and dangerous for democracy, What is serious is that agents like Mark Kennedy can be used to a perverse effect, they can be put in a position which results in exaggeration and dramatisation, feeding the complicitous ears of authorities who need that dramatisation to justify a case.

Yildune Levy’s lawyers demanded [translation] the submission of information pertinent to her file because some of the information and allegations had come from Kennedy. They insisted that:

The very existence of such an intelligence service file… reveals clearly a misuse of procedure and a violation of the principle of fairness and legality in obtaining the evidence.

Kennedy’s role in the affair

Here is a copy of Mark Kennedy’s instructions that were obtained by the defence lawyers: 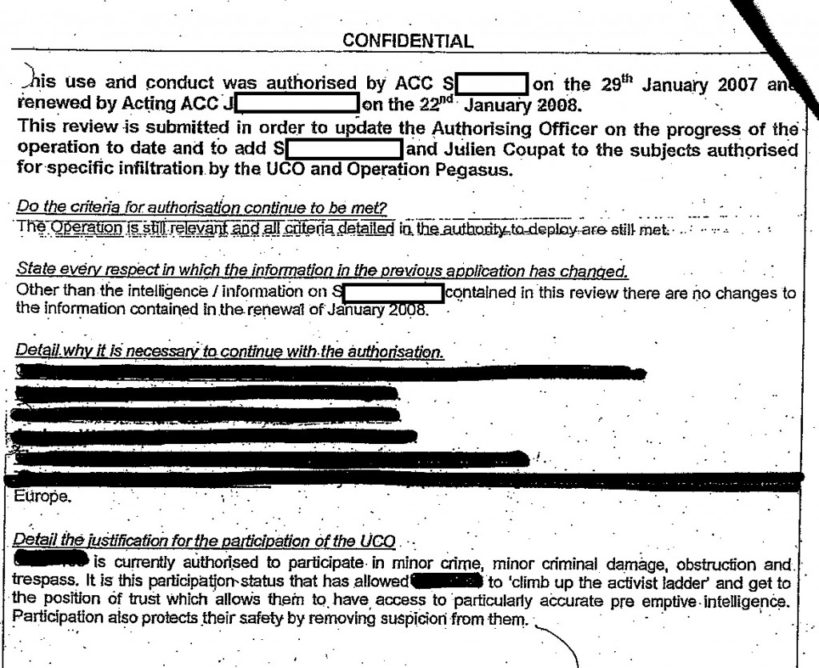 But there was one missing piece in the jigsaw: the names of the authorising officers.

The officers’ names eventually reached the Tarnac defence team in January 2016, via a UK source. That evidence was discovered within the Operation Pegasus files. These relate to Kennedy’s role in another 2008 protest by environmentalists, who stopped a train carrying coal to the Drax power station in North Yorkshire.

Here is the extract that names the authorising officers:

These same files include another reference to the Tarnac deployment – an item that is brief and easily overlooked, but is highly significant. In the extract, Kennedy informs his supervisor (DI Hutcheson) that he has received instructions to visit Julien Coupat at his farm in Tarnac.

Here’s what happened next:

During the summer, 2008, three months before they [the Tarnac 9] were arrested, some inhabitants of Tarnac saw the arrival of two visitors in their farm. It was Mark Stone [aka Kennedy] and his American mate, the one who was with him in New York. A friendly visit – militant tourism….

In other words, Kennedy had acted on his instructions.

In case of doubt, here is an extract from Kennedy’s Op. Pegasus files, giving Kennedy’s code number (UCO 133) and confirming Hutcheson as his superrvisor: 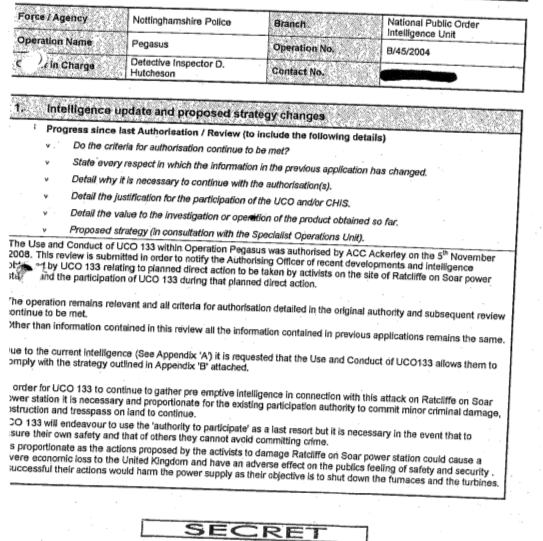 According to author and sociology professor Alberto Toscano, the French authorities were determined to rebrand the Tarnac accused as terrorists:

The French authorities have made it clear that the aim of this highly spectacular operation was to send a pre-emptive message, to nip in the bud the perceived threat of anti-capitalist movements that refuse the parliamentary arena and opt for direct action… They have also referred to these political milieus as “pre-terrorist”.

The sabotage that occurred resulted in trains being delayed. There was never any danger to passengers. To describe that sabotage as terrorism was clearly ridiculous.

The dropping of charges against the Tarnac accused also acts as a direct challenge to the Pitchford Inquiry into undercover policing, highlighting the role that British undercover police (specifically Kennedy) played in the politicisation of protest.