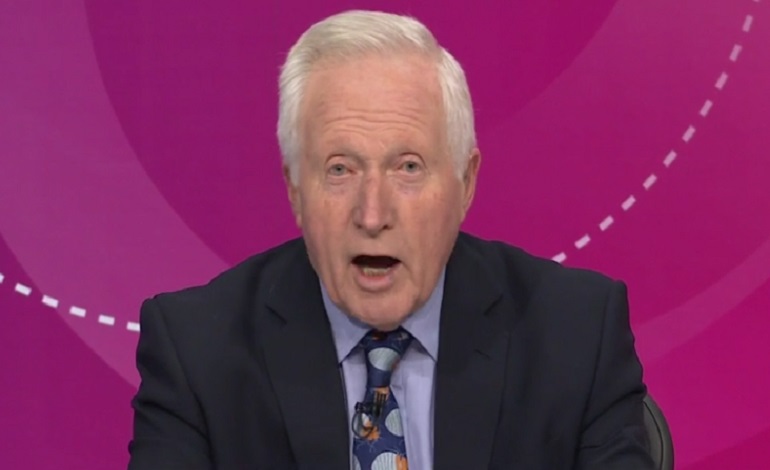 One of the most popular articles I have written lately was about Tory councillor Chris Stevens, who dismissed Aditya Chakrabortty’s concerns on BBC Question Time about how government policies have led to the deaths of disabled people. Many people on social media reacted in the same way: that Stevens was just another Tory; detached from what’s actually happening in the real world. But this detachment and disconnect is now endemic in the audience and their questions on the programme.

The ‘questions’ on Question Time are all too often those that the Twitter echo chamber, the middle classes, and Westminster-led journalists are asking; not those of the millions of people in the lowest socioeconomic groups.

Brexit is a perfect example of Question Time‘s obsession with a topic no one I know (in person) actually talks about. During the referendum, most people had at least a vague interest and opinion on it. But for many, this was quickly replaced by the feeling that, as always, the decisions will be made by distant forces and that it will bear little implication on our lives. It is a subject reserved for Westminster journalists on Twitter and the middle-earning socioeconomic statuses trying to convince the rest of us what we should be interested in.

And it’s this type of detached questioning that now permeates the programme.

Meanwhile, in someone else’s world…

Most of our black friends on the south London council estate my girlfriend and I live on are more concerned with financially getting their families to the end of the week; let alone worrying about ‘Oxbridge’. Especially one friend who’s on his fifth temporary job this year because there’s no full-time work in our area, and who has a four-week-old baby – a child that will undoubtedly face the same challenges he has.

Our next question is on how the UK should treat those who travelled to Syria if they try to return to the UK #bbcqt pic.twitter.com/qMSDrmdsVr

Daesh (Isis/Isil) is not the biggest threat to mine and my girlfriend’s security; that would be the Tory government.

Occasionally, the NHS comes up as a topic on the programme:

The next question asks if being obese should mean people are less entitled than others who take health risks, to NHS treatment #bbcqt pic.twitter.com/Gp1AMiw8sz

Sadly, the thrust of the debate is often about underfunding and what could happen to the NHS if the Tories privatise it. People rarely mention that the NHS is already failing the poorest in society, and has been for years [pdf, p19].

Question Time: even screwing up the Welfare State

But when Question Time does get it right, it talks about issues which most people in the audience and on the panel have probably never experienced:

The next question asks the panel to consider life on Universal Credit #bbcqt pic.twitter.com/OWOcI7S5rf

The ‘Welfare State’ and Universal Credit are important. But ask anyone who actually has experience of being persistently reliant on benefits, and they’ll tell you the chaos is nothing new.

Only this week, my girlfriend and I were helping out a pregnant friend. She and her partner were both previously working, before both were unceremoniously dumped (made redundant) by their zero-hours, employment rights-abusing employer. At 23 weeks pregnant, she repeatedly tried and failed to get help from the Department for Work and Pensions (DWP). Now 33 weeks gone, having been living off £50 a week for the past ten weeks, and with £3,000 worth of rent arrears, she has finally been told to apply for Income Support.

Whether she gets it or not is another matter. And the only way she has been able to try and sort this out is to come to ours to borrow our computer to print off a 77-page form she then has to send back to the DWP. Contrary to popular belief, this 23-year-old has no computer at home and no internet access.

One example of many

This is just one example of probably hundreds of thousands where the DWP systematically fails people, and has been long before the Tories came along. I remember screaming down the phone to a DWP adviser in 2008, because my then partner and I had been left without money (due to the DWP’s entrenched incompetence and lack of a duty of care) for seven weeks, and we’d got to the point where our fridge was empty and we’d run out of toilet paper.

Or take my partner, who experienced an entire two-year period with nothing but a £20.18 weekly payment of child benefit. All because her local Jobcentre said it didn’t believe her child was hers, even with all the correct documentation. This was only resolved after a tribunal, where another DWP worker confirmed that the adviser who had seen my girlfriend did indeed stop all her benefits because they didn’t believe her child was hers.

But another issue has dominated Question Time of late. And it is the sexual harassment, assault and rape allegations against not only Harvey Weinstein but countless politicians too:

As ever you get the first question in advance. It follows the revelations about Harvey Weinstein in recent weeks #bbcqt pic.twitter.com/U7gW3smkR7

Our last question is on the levels or respect shown to women #bbcqt pic.twitter.com/JsopMfS7TP

While these examples are representative of how our society is entrenched with misogyny, patriarchy and abuse of power, they’re narrated by privileged women in careers and industries most will never encounter. Meanwhile, the sexual harassment, assault and rape of working-class women rarely gets a look in, even though it is embedded in society. I’ve often discussed this with my girlfriend, Nicola Jeffery.

It’s interesting that the sexual harassment, abuse and rape of women is suddenly front-page news. Especially as it’s women in positions of privilege being affected. Because for most of us, this is nothing new, and is carried out by strangers, bosses and often the men we are in relationships with on a regular basis.

From a young age, we are conditioned to either be powerful, and therefore crave power, or be submissive and just accept what we’re given, whether you’re male or female. But this also creates a hierarchical structure throughout society of abusers and the abused. This is nothing new. This abuse of power affects working class women on a daily basis across many different industries who never get to tell their story and whose voices are never heard. From bar staff, to office workers, to receptionists to cleaners, misogyny and patriarchy are rife.

From the thousands of single parents on benefits, escaping domestic violence at the hands of an abusive partner, to the council estate WASPI women who have been denied their right and entitlement to retire at the age they were promised, to the horrendous reports of countless rapes across countries like India – it is simply accepted in most societies and cultures that this is the norm for the poorest women.

The abusers fixing the abuse

And if you complain, someone usually asks you ‘What’s your problem? You on a period? You started the menopause early?’. As if there weren’t once great, historical nations run by women. We then find that there are also no platforms or places for somebody who has experienced this life to ever really challenge the establishment or status quo, either educationally or politically. With nowadays an even bigger gap in social mobility.

So while this continues to be a daily experience for millions of women and has been for centuries, I do reluctantly support this latest establishment exposé. But I am deeply troubled that this is just the tip of an iceberg in comparison to the real issues of classism, hierarchy and the misogyny that they create. It will sadly be the same establishment structure that allows the systemic abuse of women, that will be responsible for dealing with it. And, ultimately, we’re displaying animalistic behaviour, when we’re supposed to be humans.

Nicola’s points sum up Question Time well. Because the audience, and therefore the questions, are no longer representative of the general public. They now seem to represent the programme makers and what they want to discuss, and also Westminster journalists and the middle classes. They don’t wish to talk about how poverty and deprivation is systemic, or about the resulting problems like housing, health inequality, benefits, crime and lost education.

And if you try and get in the audience for a BBC political show, and do actually come from a council estate and live on benefits, you don’t get very far. Nicola was asked to go on a BBC London pre-general election programme. The producer asked her what she’d like to talk about; Nicola told him social cleansing – to which the producer replied: “I’m sorry, what is that about?” Subsequently, she did get on the show, but was turned away at the gates by security. The reason the producers gave? Because they found out Nicola’s partner was me.

Question Time is no longer fit for purpose; not for people where Nicola and I live, anyway – one of the most deprived areas [pdf, p41] in the UK. It has become the televised apparition of the Westminster, political and middle class echo chamber; demonstrating that, once again, those on the bottom rung of society have no one left to fight for them except themselves.