Shop local, or don't shop. Black Friday is lining the pockets of the rich. [OPINION] | The Canary ` 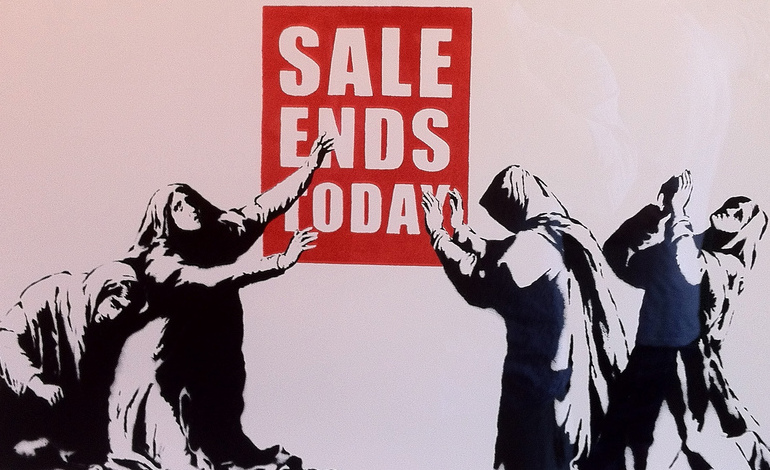 It’s difficult to avoid Black Friday: hailed as the best day to shop and get ‘the best deals’. Traditionally, it falls on the first Friday after Thanksgiving. Which is a bit odd, because we don’t celebrate Thanksgiving in the UK. But in recent years this ‘tradition’ has gathered momentum here. And now there’s a growing push to ignore consumerism and find alternatives.

There’s no definitive answer to explain the name. It could date back to the discounted sale of slaves after Thanksgiving. But historically, ‘Black Fridays’ refer to negative events like the US gold market crash in 1869. Another Black Friday occurred in 1910, when hundreds of suffragettes were assaulted and arrested by police. In 1919 abysmal working conditions in Glasgow led to Black Friday riots.

How strange that it’s now ‘celebrated’ in shops across the world.

The link to consumerism was a simple skip. Because there’s a national holiday in the US after Thanksgiving, thousands go out to shop and corporate bank balances shift from red to black. The term has been used in America since the 1980s. But it marks a global trend towards consumerism. As George Monbiot wrote:

Pathological consumption has become so normalised that we scarcely notice it.

Where are the profits?

It’s fitting that Amazon was the corporation that ‘imported’ Black Friday to the UK in 2010.This is the company whose ongoing drive for profit has earned it a reputation for tax avoidance. In 2017, Amazon only paid £15m tax, despite European revenues of £19.5bn.

As corporate giants can offer bigger discounts, they’ve driven a trend to shop online, and profits have soared. And as a result, UK companies, including independents, have suffered. But people are still shopping and it’s predicted that £2.6bn will be spent in the UK on Black Friday alone.

But the relentless push towards consumerism comes at a time when poverty is rising and more people than ever are going into debt to shop.

So there are many reasons to avoid Black Friday. And there’s an increasing drive to stick two fingers up to the relentless consumerist push.

Black Friday is also Buy Nothing Day. This trend was started by AdBusters, the Canadian “culture jammers”, in 1993 and has now grown worldwide. The premise is simple:

The More You Consume, the Less You Live… at a moment in human history when global warming is breathing down our necks, why not do something wildly different: Ignore Black Friday!

They have some ingenious ways not to shop:

Whirl-Mart: You and nine of your closest friends silently drive your shopping carts around in a long, inexplicable conga line without ever actually buying anything.

Credit Card Cut Up: Stand in a shopping mall with a pair of scissors and a sign offering a simple service: to put an end to extortionate interest rates and mounting debt with one considerate cut.

Another way to avoid Black Friday is simply to shun handing over what little money we do have to large chains and spend it locally. In Penryn, a small town in Cornwall, there’s an organised push to avoid Black Friday to support local makers and independent businesses. And support for ideas like this is growing nationwide. Because it helps boost local economies and supports individuals.

The continual push to make, transport and sell crap has a huge environmental impact too. There are alternatives, as Monbiot says:

Bake them a cake, write them a poem, give them a kiss, tell them a joke, but for god’s sake stop trashing the planet to tell someone you care. All it shows is that you don’t.

Vicki Cox, mother of four, told The Canary what her family chose to do:

We all decided that if we could find spare money for rubbish (oh sorry, gifts) then we could find money to go to good causes or give directly to those who needed practical help or things more than we do. We all choose our own charity or cause and send the gift money to them.

And to be honest, opening an envelope saying I had paid for a toilet in Uganda or medical aids for refugees was a much nicer feeling than opening something I didn’t even like!

Black Friday now runs into Cyber Monday, and from there a relentless consumerist frenzy for the next month. Millions will be spent on ‘stuff’ that few can afford, much of which is not needed, or wanted. The more of us who make a stand against this ‘event’ the better.

Get Involved!
– Participate By Not Participating.
– Support your local shops.