A Conservative MP thought it was a good idea to open a food bank. That went well, then. [IMAGES] - Canary 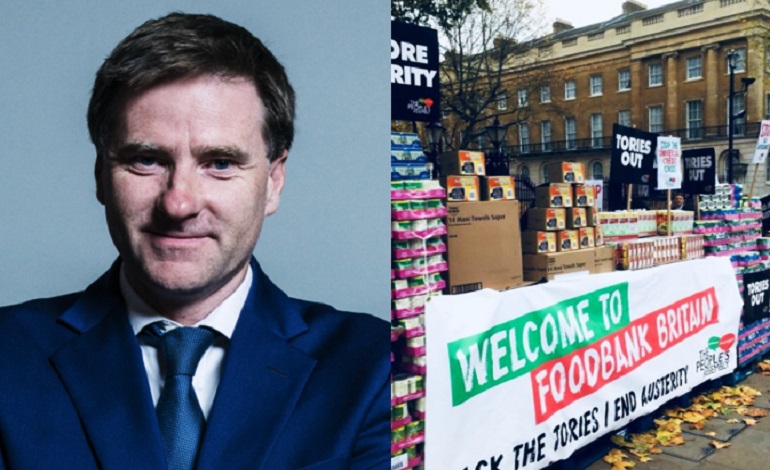 A Conservative MP has officially opened a food bank in his constituency. Needless to say, his actions left many people unimpressed. And what’s more, this Tory is also a Minister who’s responsible for Public Health.

Another day, another food bank

On Friday 24 November MP for Winchester and Chandler’s Ford Steve Brine opened a branch of the Winchester Basics Bank in his constituency: 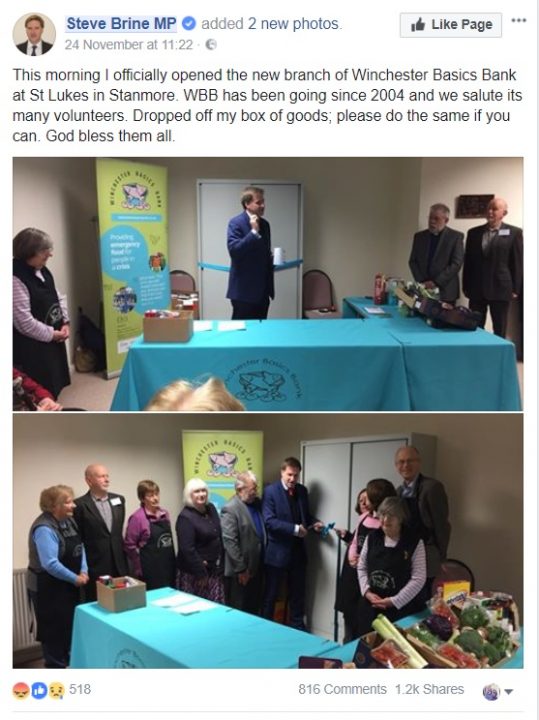 And while Brine didn’t express any pride in opening the food bank, lawyer and campaigner Peter Stefanovic told the world what he thought of the Tory MP’s actions:

Now we've seen it all! A Tory MP Proudly "officially opening" a new local food bank to help those in need because of his parties policies!! pic.twitter.com/hkjg5Zxqaz

So you're spouting the same line as your beloved Mogg, that rather than a sign of deliberately ingrained gross inequality, you see it a a good thing? The fact is, that in one of the World's richest nations there should be no food banks whatsoever. #ImAllrightJack

why has he consistently voted for measures which exacerbate the situation? Typical Tory hypocrite

While others disagreed with the assertion that the rise in food bank use is due to Conservative policies:

It only takes a few seconds to researchhttps://t.co/zyY2RCS5QC

But many food bank operators and analysts cite that they have seen an upsurge in referrals. As The Canary has documented, since the Tories first came to power in 2010:

The Trussell Trust found that “food banks in areas of full [Universal Credit] rollout for six months or more have seen a 30% average increase six months after rollout compared to a year before”. It also said that “issues with a benefit payment remain the biggest [43%] cause of referral to a food bank across the UK”. And Trussell Trust analysis shows what Universal Credit accounted for:

Furthermore, the Trussell Trust said 27% of referrals to them came from people on low incomes.

Meanwhile, the number of hospital beds where malnutrition was cited as the cause of a person’s illness has tripled in the past decade. And as The Independent reported:

Cases of other diseases rife in the Victorian era including scurvy, scarlet fever, cholera and whooping cough have also increased since 2010…

In 2013, Brine voted against a parliamentary motion calling on the government to publish research into food bank use and to take measures to “reduce dependency” on them.

In his book The Condition of  the Working Class in England, Marxist philosopher Friedrich Engels said of early Victorian-era charity:

Your self-complacent, Pharisaic philanthropy… placing yourselves before the world as mighty benefactors of humanity when you give back to the plundered victims the hundredth part of what belongs to them.

Essentially, Engels was saying that those practising charity were trying to make themselves out to be holier-than-thou by helping the very people they’d plunged into destitution in the first place. And for a Tory MP opening a food bank in 21st century Britain – this description by Engels couldn’t be more appropriate.

– Support The Canary by becoming a member.