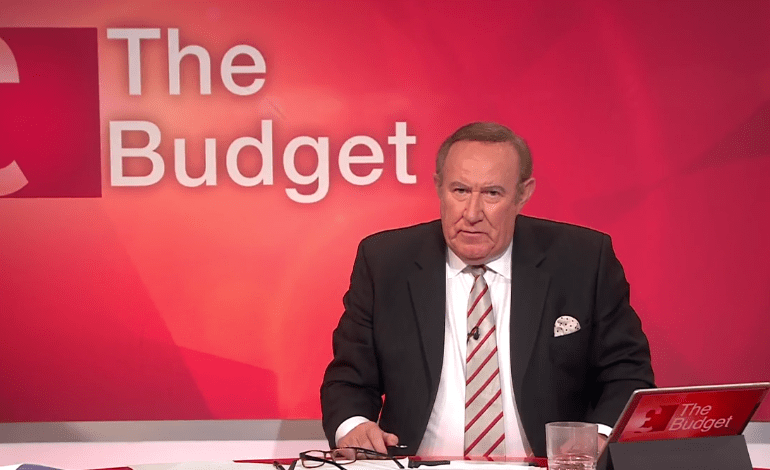 Andrew Neil has been schooled by 24 economists for apparently talking rubbish while presenting BBC Daily Politics.

He suggested that current debt interest payments are estimated at £49 billion, and rising. His use of £49 billion was misleading, as it included £9bn owed by the Treasury to the Bank of England (BoE). Because the Bank is part of the public sector, £9bn is in effect owed by government to itself, as the Office of Budget Responsibility (OBR) explains.

The letter comes just after Neil was publicly challenged by the economics professor at King’s College London Jonathan Portes for displaying an “ignorance” of economics. The OBR says:

Remove the £9bn that’s within the public sector and we’re left with £40bn. But that figure is still out of context, according to the economists:

But the £40 billion is not meaningful in isolation. It is best understood as a share of the UK’s national income or GDP. This amounts to just 2% of GDP – a historically low share of the national ‘cake’. This is remarkably low, given the costs (debt) incurred by the government to bail out the private financial system after the 2007-9 global financial crisis, and given Britain’s falling wages which reduce government tax revenues.

They said it’s even more remarkable that the figure is not higher, given the Conservatives have delivered the “slowest economic recovery on record”. This context was not provided in the interview, which also put a lone McDonnell up against four BBC pundits.

A BBC spokesperson told The Canary that Neil’s figure “was taken from the Treasury’s Spring Budget Red Book from this year and refers to debt interest payments for 2017/18”.

In the letter, the 24 economists then backed Labour’s plan for investment:

Increased public investment in productive activity will expand our nation’s income and with it, government tax revenues. By so doing public investment will enlarge the economic ‘cake’ and help bring down future debt interest payments as a share of GDP.

During the general election, over 120 economists worldwide also backed Labour’s economic strategy. The experts pointed out that the Labour leader’s investment-based plan will stimulate the economy, while there is “no future” in a Conservative “race to the bottom”. This view among economists, even from the conservative International Monetary Fund (IMF), should be common knowledge. But we have too many media pundits, like the BBC‘s Neil, talking about government finance as if it’s the same as a household’s. As economists keep telling us, that’s a myth.