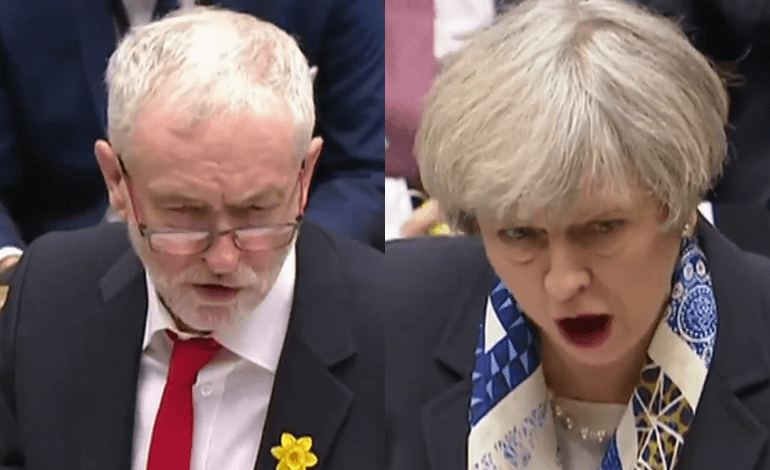 Jeremy Corbyn has finally buried the myth that swept the Conservatives to power.

At Prime Minister’s Questions (PMQs) on 1 March, the Labour leader exposed the con that the Conservatives borrow less than Labour.

Theresa May was repeating her usual irrelevant platitudes:

If you are going to be able to provide treatment for people with mental health conditions, you need to have the strong economy that enables us to pay for it. The one thing we know about Labour is that they would bankrupt Britain.

But in response, Corbyn put that myth to bed:

Coming from a government that, by 2020, will have borrowed more and increased the national debt by the total borrowing of all Labour governments, that comes rich.

People on social media lauded the refreshing dose of reality:

Good point from Corbyn. How can the Tories possibly lecture anyone on borrowing? Hammond can say "go away", but they know he's right. #PMQs

And Corbyn right to pick up May on debt when Cons since 2010 have piled up more than every past Lab Govt combined. Doubling to £2tr #PMQS

The myth is so entrenched that even Conservative MPs seem to believe it. Take Daniel Kawczynski MP, who tweeted this graph showing the national debt since 1995: 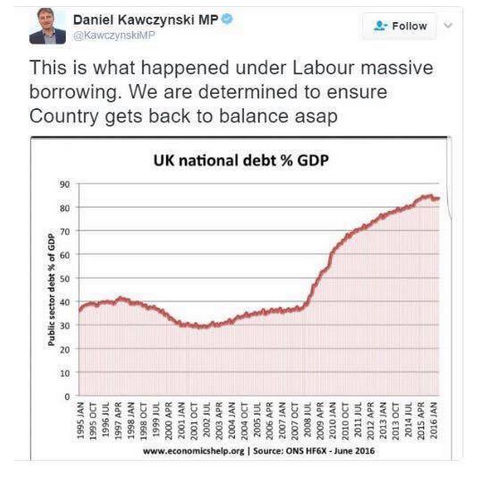 Kawczynski assumed the chart would show national debt shooting up under Labour. But it shows the opposite.

There’s a sharp increase in national debt after the taxpayer shouldered the financial crash for bankers in 2008. Then, the Conservatives came to power and David Cameron assured us:

But since the Conservatives took power in 2010, there has been a steady increase in government borrowing, as the graph shows. Under six years of George Osborne, the UK national debt increased by over £555bn.

The evidence tells us that Labour not only borrows less, but also repays more debt. Economist Richard Murphy showed this through data on borrowing per year from 1946/47 to 2016.

The Canary’s Ed Sykes has put this data in graph form:

The average borrowing for each year in office is much higher for the Conservatives (£33.5bn) than Labour (£26.8bn). And the Conservatives’ record on repayments doesn’t look too good either:

The underlying lesson here is that cutting public spending, like Osborne did severely, can actually pile on more debt. Calculated public investment facilitates economic activity and brings greater returns in the long term.

Corbyn needs to demolish the myth that the Conservatives are more prudent with national finance at every opportunity. Otherwise, our country will continue to be run based on a pack of lies.