Hunts are not only endangering foxes, now they're rampaging through the suburbs [VIDEO] 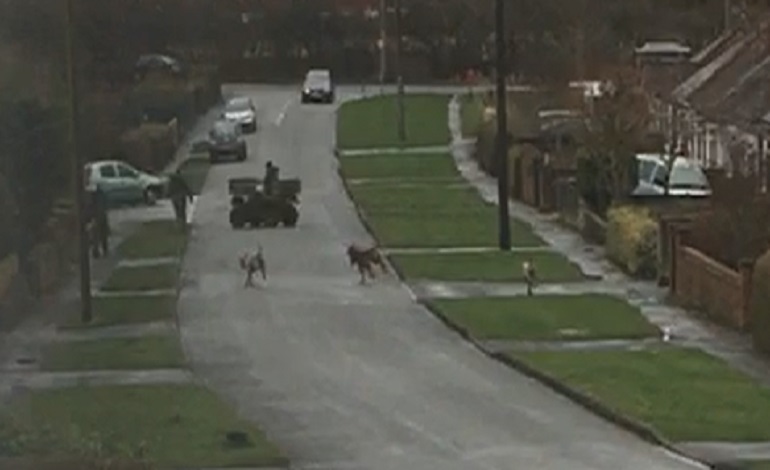 THIS ARTICLE CONTAINS IMAGES THAT THE READER MAY FIND UPSETTING

As the Conservative government continues to push for a vote on scrapping the Hunting Act, another shocking attack by fox hounds has emerged. And this time, it was not in the countryside, but on a suburban street.

On Saturday 25 February, a pack of around 20 fox hounds entered Penningtons Lane, Macclesfield. Eyewitnesses say that the hunt was chasing a live fox. The hounds had previously been trailing on an adjacent field. And following the hounds into the quiet suburban area were two quad bikes and members of the hunt.

An eyewitness said that one hunt member got off her quad bike and allegedly removed a dead fox from a private garden. Early eyewitness reports claim the hunt member began to ride off, clutching a coat to her stomach. The woman claimed she needed to get to a hospital as she was “pregnant”. But when residents confronted her, she was allegedy hiding the dead fox beneath her coat.

How many (alleged) crimes can one hunt commit?

The Cheshire Forest Hunt has admitted responsibility, and “apologised 100%”. The Canary tried to contact the group. But we received no response by the time of publication.

The Canary spoke to wildlife campaign group Stop The Cull. It said that if the Cheshire Forest Hunt was trailing a fox, it would be illegal:

The Hunting Act is a deliberately weak piece of legislation. One would assume if fox hunting with hounds is illegal then this case should be easy to prosecute. But the history of prosecutions suggests otherwise.

Pictures from the incident clearly show boxes to carry terriers on the quad bikes. Terriers that were traditionally bred to hunt animals that are hiding underground are often used in live fox hunts. Stop The Cull said:

Terrier men present at a hunt should indicate to the police that a trail is not being followed. Also, terrier men must carry on them written permission slips for all land they travel across. They were trespassing on Saturday so this another potentially unlawful aspect.

The law says that quad bikes must have front and rear number plates when using a road. Stop The Cull said:

When the quad bikes arrived they didn’t have any number plates on them. The riders stuck them on afterwards.

And eyewitness reports also say that the hunt broke down a private garden fence during the incident. Although The Canary has been unable to verify this.

Cheshire Police and the RSPCA are investigating the incident. The police said in a Facebook post that they take:

allegations of any illegal activity seriously and we have specialist officers working with the RSPCA on the investigation.

But campaigners have called the impartiality of Cheshire Police into question. They allege that a police officer, Claire Ford, is a member of the Cheshire Forest Hunt: 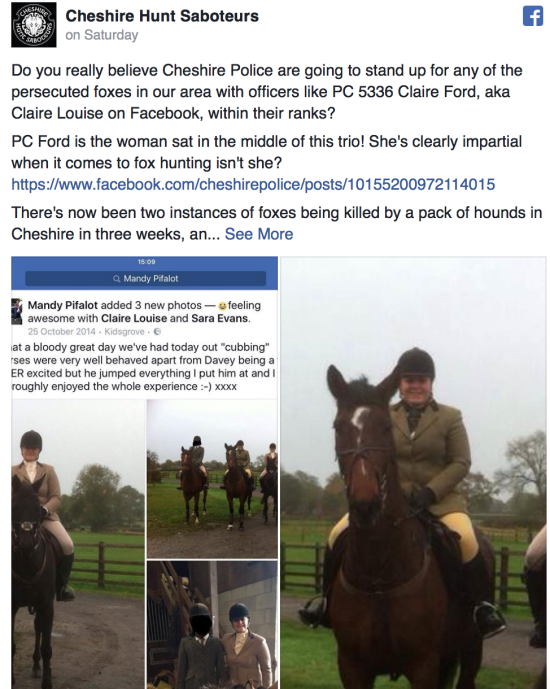 They also claim that, on Saturday 10 December 2016, Ford acted as “private security” for the hunt:

But an investigation by Cheshire Constabulary’s Professional Standards Department said that Ford was acting within her remit at the incident. Detective Chief Inspector Julie Westgate said:

A number of complaints were lodged by members of the public in relation to PC Ford’s presence at the hunt, which took place on December 10th last year. The Constabulary has undertaken a thorough review of the incident and established there is no evidence the officer acted inappropriately. Although off-duty when she arrived at the scene, PC Ford identified herself as a police officer, thereby placing herself ‘on duty’. PC Ford advised both hunt participants and hunt protestors of the landowner’s request for them to all leave her land. PC Ford was present solely to prevent a breach of the peace and there is no evidence that she showed favour to either side. Her actions were in keeping with what is expected of a police officer.

The force further stated that:

The Constabulary would like to reiterate that when officers are called to hunt meetings, they are impartial and are there to uphold the law. Where allegations of illegal activity are made, these will be investigated thoroughly, impartially and based on the evidence available

But campaigners say it is impossible for police to be unbiased if they are members of a hunt.

This is one of several incidents, allegedly involving fox hunts, in a matter of weeks. As The Canary previously reported, a fox hunt in January attacked an elderly couple and their dog on a beach in Cornwall. And days later, a pet cat had its face ripped apart in its owner’s garden by a fox hound.

I do not believe that animal welfare is best served by the Hunting Act.

This is the body of the dead fox, allegedly killed by hounds in Macclesfield on 25 February: 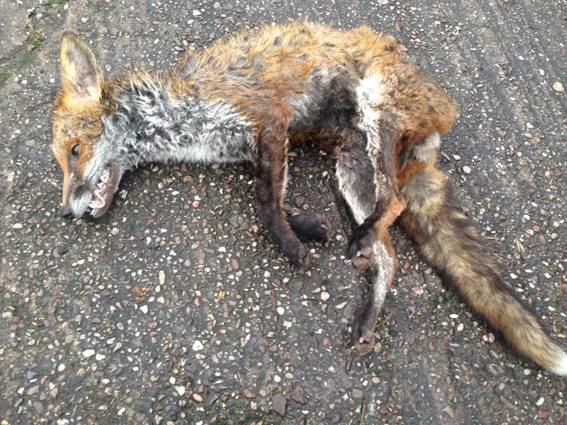 Maybe the public should ask themselves if animal welfare is best served by the Hunting Act, or not. And then make up their own minds.

Featured image and additional images via Stop The Cull