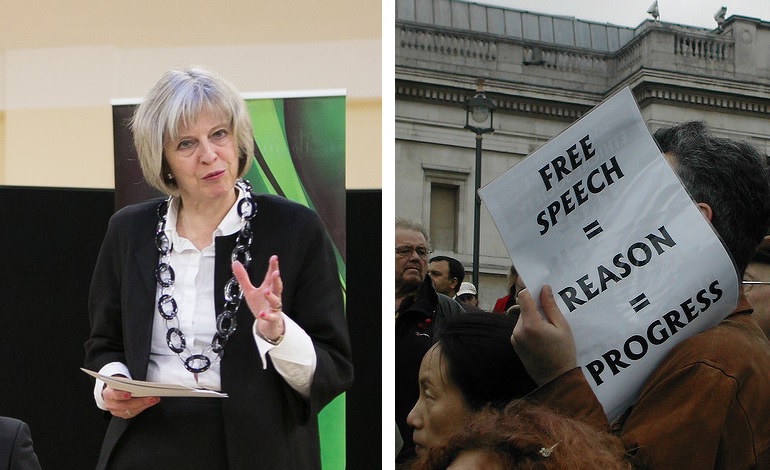 The Tory government’s crackdown on free speech just went into overdrive. The Minister of State for Universities, Jo Johnson, recently sent a letter to universities across the country. And as a result, a number of institutions cancelled planned events.

2017 marks an important milestone in the planned events’ focus. Because it is now the 50-year anniversary of the Israeli occupation of Palestine. And the scuppered events were part of Israeli Apartheid Week (IAW).

IAW has been running for 13 years. As the name suggests, its aim is to raise awareness of the apartheid system used by Israel in its relationship with the Palestinians. In 2014, renowned linguist and scholar Noam Chomsky told Democracy Now:

In the Occupied Territories, what Israel is doing is much worse than apartheid.

Yet ahead of this year’s IAW, Johnson – brother of Boris Johnson – wrote to the Chief Executive of Universities UK, Nicola Dandridge. He raised concerns over antisemitism, following reports of campus incidents, and asked for the government’s definition of antisemitism to be upheld. He added:

This will include events such as those that might take place under the banner of ‘Israel Apartheid’ events for instance.

Universities largely cited “security and safety reasons” for the cancellations, according to RT. But almost 250 academics signed a letter condemning it as a crackdown on free speech. In the letter, published in The Guardian, academics charge that campus incidents seem to “reflect the increase in xenophobia since the Brexit vote”. They also criticise the government’s definition of antisemitism, saying it conflates “criticism of Israel with antisemitism”. The letter reads:

These are outrageous interferences with free expression, and are direct attacks on academic freedom. As academics with positions at UK universities, we wish to express our dismay at this attempt to silence campus discussion about Israel, including its violation of the rights of Palestinians for more than 50 years.

It is with disbelief that we witness explicit political interference in university affairs in the interests of Israel under the thin disguise of concern about antisemitism.

IAW events are due to run in the UK from 28 February to 6 March. Just at the moment Israel’s government watchdog released a damning report into the country’s 2014 Gaza assault. The report criticised the Israeli government for:

This report could, of course, add to the IAW debates and discussions planned in the UK. Or it could if these events were allowed to go ahead. But the UK government has essentially strangled that possibility through pressure.

But IAW events are not limited to the UK. Between March and April, events will take place in Europe, North America, Africa, Palestine (and Palestinian refugee camps), the Arab world, and Latin America.

So the Tory government can’t silence IAW. But it has, unfortunately, curbed the ability of people in the UK to speak its name.

– Learn more about the IAW.