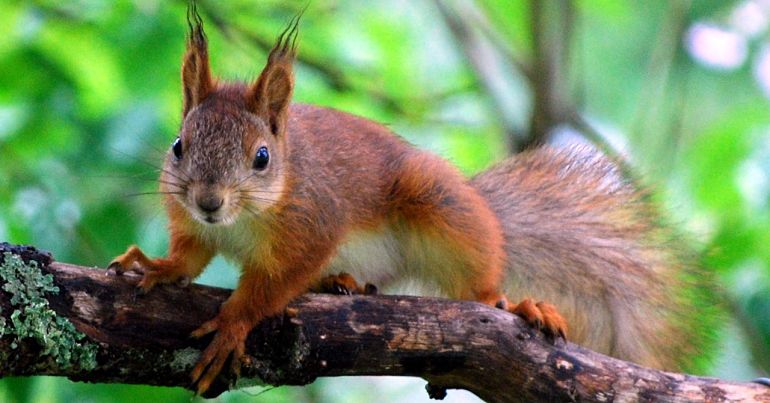 The red squirrel is one of the UK’s most loved wild creatures. Immortalised as the cheeky Squirrel Nutkin by Beatrix Potter, reds were once widespread but now only exist in isolated pockets. Most scientists fear they could soon become extinct, certainly in England and perhaps eventually in the whole UK. And as is so often the case, one of the biggest obstacles to their survival could be the delusional thinking that masquerades as ‘traditional country ways’.

The chief biological threat is the grey squirrel. A charming animal in isolation, next to a red it appears lumpen and thuggish. Greys are bigger. They eat certain foods earlier in the season than reds. And, as Stephen Moss writes in Highlands – Scotland’s Wild Heart, they are even better at remembering where they’ve stored their nuts. All this gives them an advantage over the reds. But the real killer blow is squirrelpox. 60-70% of greys carry it, but they’re totally unaffected. Reds typically die within a week, their faces disfigured by ulcerated swellings.

Grey squirrels aren’t native to the UK. They arrived from North America in 1876, brought in by the landowning set to add a touch of New World exotica to their grounds. Anyone who’s ever seen one shin up a bird feeder won’t be surprised that they rapidly escaped and made their own fortunes in the wider countryside. They now occupy much of the UK, and the reds have paid the price for Victorian aristocratic stupidity.

At first it seems as though there are two possible approaches: do nothing or do something. Doing nothing would involve hoping that nature, in its endlessly surprising way, manages to let the reds cling on somehow. It’s a valid position but doesn’t look likely to achieve great things for the reds. In part it’s a stance taken in opposition to the advocates of doing something. Up to now, doing something has meant killing something. People keen to protect red squirrels have killed grey squirrels. By shooting them. By poisoning them. And by trapping them then clobbering them over the head with a stick (known as ‘cranial despatch’).

This cull of grey squirrels has been going on in various forms for decades. But as the threat to reds has intensified, so have efforts to get the greys. The most recent government scheme began when Owen Paterson was environment secretary. Paterson, a man with a history of unfortunate pronouncements, convened a meeting about the grey squirrel issue along with Prince Charles. With a bunch of the right sort of chaps, all steeped in ‘country ways’, what could possibly go wrong? George Monbiot memorably described this get-together as “a symposium of chinless wonders” and a “confederacy of dunces”, while pointing out that the grey-killing plan it hatched would be a vast waste of money and probably not effective. He quoted scientific evidence that even in areas of intensive culling, squirrel numbers recovered within 10 weeks.

Monbiot also pointed out a fascinating development in the scientific understanding of squirrel turf wars. In Ireland, the grey population was crashing in areas where pine martens were moving in. Not only that but the reds were pouring into the vacant territory. As the pine martens have marched eastward, the squirrel map has turned from grey to red.

Now an experiment has seen a similar pattern in Scotland. It’s clear that where there are more pine martens, red squirrels do better and greys do worse. The main reason for this is that reds, which evolved alongside pine martens, are pretty good at getting away from them. They can exploit their small size to hide at the end of branches. Greys are too big to do this. But also, they seem to have precious little sense of the danger that pine martens pose. Having no evolutionary relationship to pine martens, greys are literally sitting targets.

To its credit, the BBC has reported these findings enthusiastically. It’s even pointed out the reason why pine martens are only now reappearing more widely. Historically, pine martens were killed in large numbers, either for their fur or by gamekeepers who saw them as a threat to their master’s target birds. This attitude that ‘sporting’ estates needed to be cleansed of predators to leave all the ‘quarry’ for the men with guns still persists. It’s one of the main reasons why UK wildlife is in a sorry state. Natural predators are capable of keeping ecosystems in balance way more effectively than any warden, gamekeeper or culling programme. The science shows that if we had more pine martens, we’d have a better balance of squirrels. And it would cost nothing.

‘Traditional country ways’ are based on an exploitative view of the natural world. The people who insist they’re ‘custodians of the countryside’ have overseen a staggering destruction of UK biodiversity over the last hundred years. Now those same forces resist the spread of beavers, which could improve flood defences for free. They oppose the introduction of lynx, which could help balance deer populations for free. And they continue to claim that the industrial management of grouse shooting moors somehow benefits all wildlife.

Their knee-jerk reaction to the threat of grey squirrels has been to propose a never-ending killing spree. They want to turn well-meaning volunteers into death squads, confusing ‘conservation’ with ‘extermination’. There’s a solution ready and waiting, hiding up a northern tree still wary of the trap or the gun. Sure, pine martens might slightly reduce the bag at his lordship’s grand shoot. But anyone who thinks that’s a problem needs to get out of the way and let proper conservationists have a go. The days of the landed gentry are passing. The gamekeeper is no longer the source of country wisdom. We don’t have to wait for princes to tell us what to do. We might live on a relatively crowded group of islands but if we think the UK’s wildlife can’t restore itself given half a chance then we don’t know nature.