Boris Johnson allies himself with a prominent fascist, and we should all be very worried - Canary 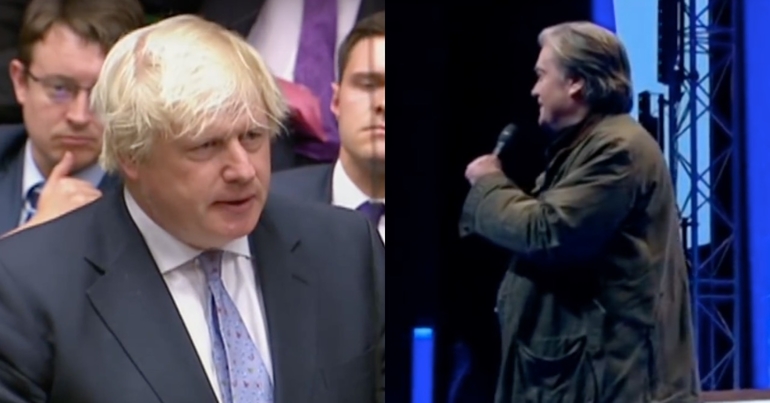 A worrying report from BuzzFeed has revealed that former foreign secretary Boris Johnson has been secretly texting prominent fascist Steve Bannon. This is an incredibly worrying development. Because it shows how Bannon is potentially pushing far-right populism into the senior ranks of the Conservative Party.

BuzzFeed revealed that Bannon and Johnson have been in contact with each other for some time. In fact, it seems the pair have been secretly texting since Bannon worked in the White House.

And it comes as no surprise that the two are fond of each other. During Bannon’s visit to the UK, he was critical of Theresa May’s leadership, and asserted that “now is the moment” for Johnson to lead Britain.

Another source close to BuzzFeed, who had met with Bannon during his visit to the UK, confirmed the pair had been in contact throughout his visit. The source said they didn’t know the exact contents of the communications, but were “sure they weren’t discussing the cricket scores”.

Johnson falling head over heels for right-wing populism may come as a surprise to some who observed him as mayor of London. Because Bannon’s ideology is a stark contrast to the pro-immigration persona he portrayed as London mayor. Even more recently, as foreign secretary, his open approach to immigration in regards to Brexit seemed to be light years beyond Bannon’s views. But the texts with Bannon and a mounting list of racist insults suggest that Johnson’s apparently liberal view on immigration may have been just a facade.

All of this foreshadows a worrying possibility for the future of UK politics – that Trump-style populism is slowly infiltrating into Britain and wooing right-wing politicians.

Bannon meddling with UK politics should worry everyone. His outlandish and racist rhetoric is beginning to manifest itself among politicians and parties at an alarming rate. In March 2018, whilst addressing supporters of the far-right French ‘National Front‘ party, he said:

And he went on:

Wear it as a badge of honor. Because every day, we get stronger and they get weaker.

The former chief strategist for Trump has already brought misery and devastation to many people in the US. His most sickening work saw the creation of the infamous “Muslim Ban”. Bannon spearheaded efforts to ban all immigration from seven Muslim-majority countries, subsequently separating families and bringing untold suffering to many Muslims.

Bannon has also been cosying up to Brexit figureheads for a while now, with Johnson being the most recent addition. And in December 2017, Bannon met with prominent hard-Brexiteer Jacob Rees-Mogg to discuss UK-US relations. During an LBC interview with an infatuated Nigel Farage, meanwhile, Bannon called for people in the UK to “fight to take your country back”.

In terms of his next move, Bannon is in the early stages of establishing a new organisation in Brussels. This organisation, called “the Movement”, will provide support for far-right populist parties in Europe ahead of 2019 European parliamentary elections.

From fighting fascism to embracing it

This man has no shame. None whatsoever. Boris Johnson has now allied himself to Trump's fascist, white supremacist former spin doctor. What a slap in the face to the men and women who died fighting facism in Europe. https://t.co/xiYsSTuPK3

And he’s right. The UK, while divided on numerous issues, should draw the line at US fascists interfering in our political system. This highlights a disappointing moment in Britain’s political evolution: the descent of a country that once fought against fascism in the Second World War to one where senior members of its governing party appear to be embracing it.

With Theresa May’s leadership becoming increasingly weaker, a vote of no confidence is becoming more and more likely. Should this happen, there seems to be little doubt that Bannon will be poised and ready to help Johnson win the keys to Number 10. To ensure Bannon and Trumpism stay well clear of our politics, we need to oust those who embrace it, and we need to oust them fast.

– Read our other articles about the rise of far-right politics.