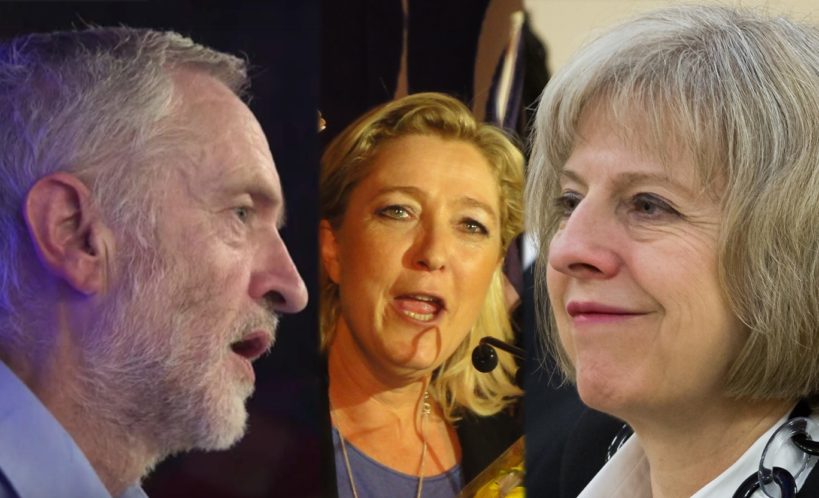 France sent shockwaves across Europe this week as Marine Le Pen – of the far-right Front National – became one of the two remaining candidates in the French presidential elections. And back in the UK, the responses of Jeremy Corbyn’s Labour Party and Theresa May’s Conservatives couldn’t have been more different.

The winner of the first round of France’s presidential elections was centre-right independent and former banker Emmanuel Macron (with 24% of the votes). Le Pen came in second, with 21.3%. Close behind were right-winger François Fillon (20%) and left-winger Jean-Luc Mélenchon (19.5%). Journalist Ellie Mae O-Hagan summed up the Macron/Le Pen run-off vote as:

The Front National, The Guardian wrote recently, was originally full of “Vichy apologists, colonial nostalgics, [and] neo-fascists”. And that’s a hard reputation to shake off. Especially when Marine Le Pen herself has claimed that French colonialism was a positive thing; and has essentially denied France’s role in deporting Jews to Nazi death camps during WWII.

Because of the Front National’s reputation, all mainstream opposition parties in Britain immediately backed Macron against Le Pen. Even if it was as the lesser of two evils. Shadow Foreign Secretary Emily Thornberry, for example, said Labour’s stance was that “it’s clear that only one of the remaining candidates is offering an inclusive and tolerant vision of the country’s future”. Although she did point out that “French voters face a stark choice in this election”.

Near silence from the Tories

But the Conservative Party was not so quick to respond. Prime Minister Theresa May’s official spokesman simply said there was a “longstanding policy of not commenting on ongoing elections in other countries”.

In other words, the prospect of the Front National’s candidate becoming the next French president was something the Tories didn’t deem worthy of a comment. That may have been because, as The Telegraph has pointed out, a Macron victory “would be bad” for Theresa May. It may also have had something to do with the fact that almost a third of Tory voters (and 49% of UKIP voters) appear to think it would be better if Le Pen became the next French president:

Brits split on whether it would be better for UK if Macron (23%) or Le Pen (21%) becomes French president https://t.co/YLYLF5nlH9 pic.twitter.com/fzrRdhliIm

The French left’s main anti-neoliberal and anti-establishment candidate – Mélenchon (the ‘French Corbyn‘)- ran on a voter-mandated platform [French] of:

But he failed to win enough votes to make the run-off election; in part, at least, because other parties on the left didn’t get behind his campaign.

That essentially left Le Pen looking like the anti-establishment candidate. An image she quickly looked to pounce on, portraying Macron as the candidate of the establishment; a portrayal that wasn’t helped by Macron celebrating his first-round result with celebrity friends and receiving a string of endorsements from establishment political parties.

Essentially, the French election could now emulate the 2016 US election. One in which establishment politicians and media outlets undermined the centre-left campaign of Bernie Sanders. One in which those same forces expected Hillary Clinton to easily defeat the fascist-courting populist voice of Donald Trump. And one in which establishment voices seriously underestimated people’s anger and disenchantment with the political and economic status quo.

A missed opportunity for the French left

As a number of commentators have since pointed out, the Macron vs Le Pen election race is partly the result of a divided left in France:

Missed opportunity for the left in France. Division lets the right win. Don't make the same mistake here. Get behind Corbyn and #VoteLabour pic.twitter.com/A9ExRvs4As

Imagine 3 Labour parties, one led by Corbyn (Mélenchon), one by Yvette Cooper (Hamon) and one by Liz Kendall (Macron). That's France.

How to stop the rise of the far right

Western media outlets jumped to hail the apparent fall of the French left; and to call Mélenchon’s moderate left-wing alternative “hard-core”, “hard left” and “ultra-left utopianism”. The apparent message being that ‘centrist’ Macron was the only sensible candidate. Even though he has promised to “relax labour laws”, “cut business taxes”, “cut public spending”, and “shrink [the] public sector”. I.e. the typical neoliberal agenda.

In this environment, as The Canary has argued previously, democratisation is key; in both our political processes and our media environment. The latter is particularly important in order to expose the real causes of deteriorating living standards in the West, and to get that message out. And Jeremy Corbyn sought to do just that when talking in December 2016 about the rise of far-right figures like Le Pen, and how to defeat them. He said:

We know why the populist right is gaining ground… The gap between rich and poor is widening. Living standards are stagnating or falling. People feel left behind by the forces unleashed by globalisation. They feel powerless in the face of deregulated corporate power… but their [the far right’s] toxic solution is actually a dead end. It’s about attacking minorities rather than facing the real issues.

But “unless progressive parties across Europe are prepared to break from the political establishment of the past”, he said, “we are going to have problems”. The new approach, he stressed, should be about offering an economic message of “social justice and inclusion” and:

convincing the long-term unemployed that the reason there is no work for them is not because of migrants, it’s because of an economic programme of deindustrialisation and insecurity… [and that] our public services are being run down because of austerity and often very predatory privatisation.

In short, to fight back against a far right growing in popularity, a continuation of neoliberalism is not the answer. The answer is to target the real causes of popular disenchantment with the status quo. To stop austerity. To ensure everyone has a dignified, well-paid job. And to protect and improve public services.

So who’s best placed to defeat fascism? Corbyn or May?

Corbyn’s message has always been to fight back against fascism with principles and policy. Theresa May’s message, meanwhile, has been to sit on the fence as fascism gains ground; and to appease it when it gains power. That’s never going to defeat the far right. To truly defeat it, the left needs to unite around a common platform that truly addresses the economic grievances that have all too often pushed people into the arms of figures like Donald Trump and Marine Le Pen.

That didn’t happen in France. But we can make sure it happens in the UK.