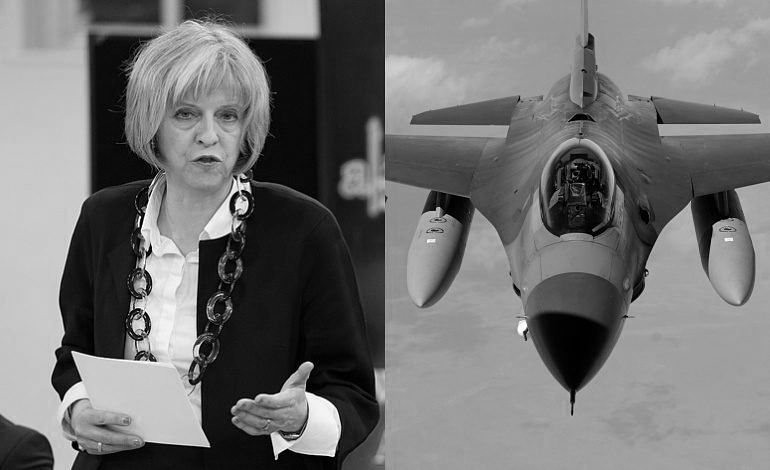 In the early hours of 25 April 2017, Turkish jet fighters reportedly bombed the headquarters of the front-line troops fighting Daesh (Isis/Isil). This came only weeks after the latest arms deal secured by British Prime Minister Theresa May with Turkey’s increasingly authoritarian President Recep Tayyip Erdoğan. Arms that include jet fighters and bombs.

In the next few weeks, Turkey is planning more attacks on the Syrian Kurdish forces fighting against Daesh. This despite the US-led coalition’s support for these forces’ efforts as a key part of the multi-ethnic Syrian Democratic Forces (SDF).

Were British arms used in the attack?

Theresa May flew to Ankara earlier this year to meet Erdoğan. Her mission: to sign a £100m jet fighter deal with Turkey. Also, between July and September 2016, the UK sold Turkey £26m-worth of armoured plate, body armour and helmets. As well as £8.5m-worth of aircraft, helicopters and drones. And almost £4m-worth of licences for missiles, bombs and “counter-measures”.

May’s arms supplies to Turkey take no account of how those arms are put to use. And they come in spite of evidence of years of violent repression by Erdoğan against Kurdish communities in both Turkey and Syria.

It is entirely possible that Turkey is now using arms or jet fighters bought from Britain against anti-terrorist fighters in Syria and Iraq.

Erdoğan now a dictator in every sense

Only a week ago, Erdoğan won a vote (by the narrowest of margins) to increase his presidential powers. Making him a virtual dictator.

Over the last two years, Erdoğan’s regime has: forged an alliance with neo-Nazis; turned Turkey into “the world’s biggest prison for the media profession”, according to Reporters Without Borders; organised massacres and destruction in majority-Kurdish cities and towns; allegedly supported and armed Daesh (Isis/Isil) and other jihadi groups in Syria; and cracked down of human rights in Turkey.

A UN report adds to the body of evidence against the Turkish state.

How much longer will this go on?

Criticism of Erdoğan from Theresa May and other Western leaders is muted. And this will likely continue as long as Turkey remains a member of NATO.

But the co-leader of Syria’s Democratic Union Party (PYD), Salih Muslim, has insisted that:

A people that is fighting terrorism is being stabbed in the back. Coalition forces must not remain silent against this. No one should accept these attacks.

The PYD is the main political force behind the secular, gender egalitarian, and multi-ethnic Democratic Federal System of Northern Syria. It has also been one of the most fervent forces opposing Daesh in Syria.

Back in the Britain, Labour MPs have been among those calling the current Conservative government out for giving the impression that “human rights in Turkey are not really on the UK agenda”. And indeed, the upcoming general election will give us a clear foreign policy choice. Do we want to hold Turkey to account, and to ensure that British-made arms are not used against anti-Daesh ground forces in Syria or Iraq? Or do we want to continue down the Tory path of appeasing dictators and putting business before human rights?

Correction: This article was updated at 9am on 26 February to amend the date of the reported attack. It previously stated the attack took place on 26 February.