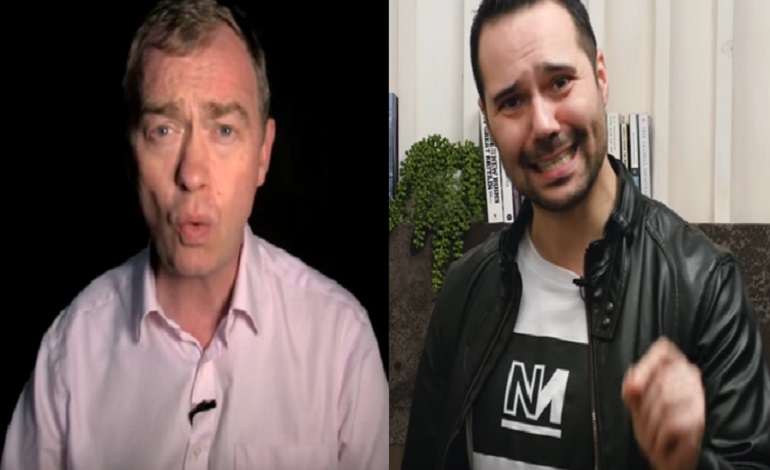 The Liberal Democrats have taken a battering from Novara Media co-founder Aaron Bastani, in a video that’s been doing the rounds on social media. And Tim Farron may do well to avoid it, as there are some uncomfortable moments for his party.

Aaron Bastani is the co-founder of independent news outlet Novara Media. He is known for his video blogs #IMOBastani. And his latest one on the Lib Dems pulls no punches. In it, he says that the party is “lying to” and “taking the piss” out of anyone who has voted for, given money to, or believed them. He also has some choice words about the party’s refusal to enter a coalition with Jeremy Corbyn’s Labour:

So just what is the Lib Dem stance on Brexit, Corbyn and coalitions?

There has been some confusion over the party’s stance on post-election coalitions. Lib Dem grandee Vince Cable ruled out a Labour pact on 19 April. And on the same day, Farron refused to rule out a coalition with the Tories. But the party updated its website on 22 April, saying:

Tim Farron has ruled out doing any coalition deals with Theresa May or Jeremy Corbyn after the election… We don’t rule out future coalitions – we believe in plural politics – but we won’t do one with May or Corbyn. We won’t be doing a deal with the SNP at Westminster because, whatever they might say, they are only interested in getting independence.

Farron also made his party’s attitude towards Corbyn perfectly clear:

We won’t put Corbyn into power. He is pro-Brexit, has promised to pull us out of the single market and marched his MPs and Peers through the lobbies to vote for article 50 without any concessions from the Tories. On top of that, he would be a disaster for the country – he has no plan for the country, our economy and offers no leadership.

So just what do the Lib Dems hope to achieve after the election? Farron said:

[Theresa May] is going to be the Prime Minister – that’s not in doubt. Our job will be to hold her to account and fight for the things we believe in – above all else our membership of the single market and for the people to have the final say on the deal.

That’s that cleared up then. The Lib Dems won’t be going into coalitions, they don’t support Corbyn’s Labour or the SNP, but they hope to hold the Tories’ feet to the fire over a ‘hard’ Brexit.

No point to the Lib Dems?

It’s unclear, if Farron’s statement is anything to go by, just what the Lib Dems hope to achieve after the general election. If they won’t enter any coalitions, then the Tories may well have an overwhelming majority. And if this is the case, it’s going to be an almighty challenge to stop a ‘hard’ Brexit.

Although, with the Lib Dems predicted by some to pick up more than 25 seats in the election, and if Labour and the Greens can make gains, the result may well be a hung parliament. A coalition would be necessary. So maybe Bastani’s advice should be heeded. As judging by the Lib Dems’ track record, if there was a chance of a Conservative-Lib Dem pact, Farron’s party would jump straight into bed with them. We are all sinners after all. Aren’t we?