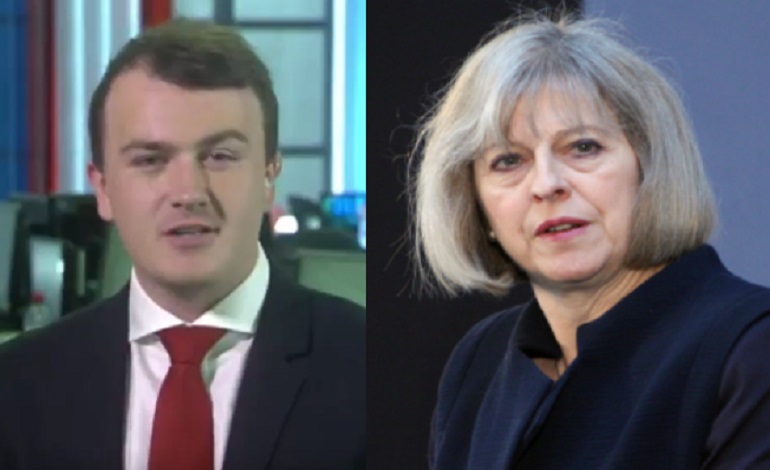 ‘Where’s Theresa May?’ has been a question on many people’s lips since the PM announced the general election. And one young journalist just showed May up for what she really is on Sky News. A hypocrite and a coward.

Liam Young is a writer for The New Statesman. In an interview for Rupert Murdoch’s news channel on Tuesday 25 April, he mocked the PM’s refusal to take part in TV debates, saying that it was Corbyn who was supposedly the “weak and ineffectual leader”.

Sky News asked where May was, as Jeremy Corbyn, Nicola Sturgeon and Tim Farron had all been out campaigning for their parties. And while Young didn’t have an answer, he had a straightforward question:

Where is she? She’s not out on the doorstep, she’s not speaking with normal people and she’s not engaging with the press and the debates process.

How anyone can believe Theresa May’s suggestion that she can offer strong and stable leadership is beyond me. This is a PM who has overseen utter chaos since the day she stepped into office. Her handling of Brexit has seen the Tory party talking up a war with Spain. British wages continue to fall faster than the value of the pound. She said time and time again that she wouldn’t call a snap election, and now she has. You simply cannot believe a word she says. And now, she’s in hiding… But should we be surprised anymore?

But perhaps a member of the public Young referred to in his interview has the answer to ‘Where’s May’?

Keep off the grass!

Graham Mills, 73, from Dudley, met the PM on Saturday 22 April during one of her few forays into actually meeting the public. He was busy mowing his lawn when May turned up, asking if she could walk across his grass. But he told her she couldn’t as he had “just cut it”. He then asked some difficult questions, to which May apparently had no answers. He said:

I started by asking her why she would not debate the other leaders on the TV and she said ‘well we meet every Wednesday’ and I said that is hardly an answer and asked if she thought she owed it to the public. Again I did not really get an answer.

I asked her why she was running the exact same campaign as David Cameron did with Lynton Crosby and employing the same scare tactics by suggesting Labour would form a coalition with the SNP, which she knows they wouldn’t. It is scare tactics. I was amazed at how nervous she was.

She kept giving me stock answers every time – which was that it would be worse under Labour. I was really disappointed.

So it would seem that a ‘real’ person asking some difficult questions could have scared the PM off the campaign trail. Or, to give her credit, she could be busy running the country. But probably not. What’s more likely is that May knows that, as soon as you scratch the surface of her party’s appalling record in government, she has no defence for the past seven years of Tory-led rule. So she chooses to shirk her responsibilities as PM rather than face the damning truth: that the Tories have failed the country.