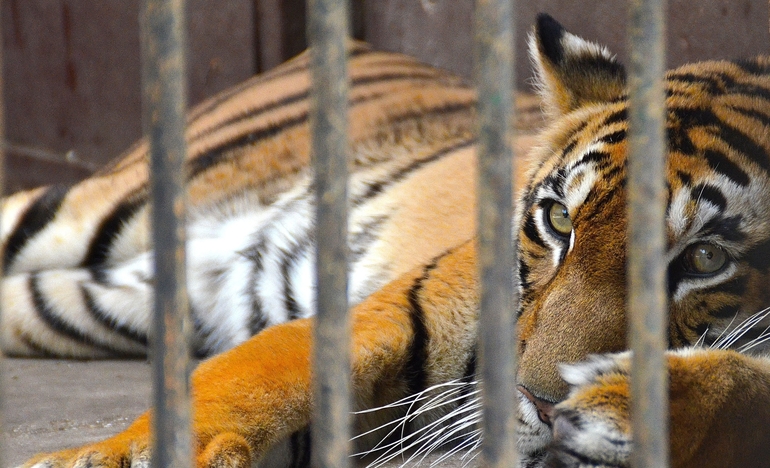 Animal charity the RSPCA is currently investigating allegations of cruelty at South Lakes Safari Zoo in Dalton, Cumbria. Nearly 500 animals have died at the zoo in less than four years. That’s a death rate of 12% of animals a year. These animals have died for many reasons, including emaciation (becoming abnormally thin or weak), exposure, and poor animal husbandry. It’s remarkable that the zoo is still open.

The Department for Environment, Food & Rural Affairs (Defra) has detailed [pdf] the animal welfare standards that zoos must abide by. Dalton zoo is accused of violating many of the welfare requirements, including the provision of food and water, provision of a suitable environment, and provision of animal health care.

Captive Animals’ Protection Society (CAPS) previously carried out an investigation and uncovered various ways in which animals were suffering at the zoo. Investigators documented an emaciated kangaroo, a mongoose with a visible skin condition, and penguins in 29°C heat with barely any water in their pool.

Also, Barrow Borough Council released inspection reports to CAPS showing that many preventable deaths have occurred at the zoo. Other causes of death included hypothermia due to lack of heating, and even being run over.

Inspectors advised the council to prosecute the zoo’s allegedly homophobic millionaire founder, David Gill, under Section 4 of the Animal Welfare Act [pdf] for allowing the animals to suffer unnecessarily. CAPS welcomes the recommendation and calls for the zoo to be shut down.

Last month, the zoo was refused a license in light of the damning evidence. Although earlier this month, inspectors noted significant improvements in standards and management.

We will have to wait on current investigations by the RSPCA to reveal whether animal cruelty is still rampant. The owner has been held responsible for all kinds of animal suffering so far. Gill’s legal representatives have said he is no longer interested in running the zoo. To prevent further trouble and potentially prosecution, this may be for the best.

– Check out more articles from The Canary on zoos.