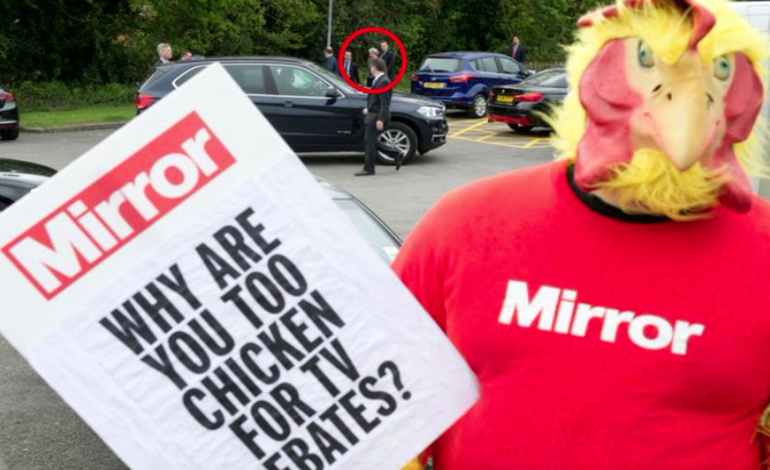 Theresa May has been noticeably absent from the campaign trail as we head towards the 8 June general election. Making virtually no public appearances, and refusing to join televised leadership debates, the Prime Minister is invisible. So a voter dressed as a chicken is on the case.

The Mirror chicken is following May around the country, as she attends her invitation-only speaking engagements.

Come on, @Theresa_May. At least give us a wave before you fly off. https://t.co/jYKNfAosbc pic.twitter.com/Iin4g2tIZx

David Cameron faced ridicule after trying to avoid TV debates during the 2015 general election. This culminated in being chased around the country by a Mirror staffer dressed as a chicken. He finally capitulated.

May has failed to learn the lesson from history. So it is now her turn to face down the giant man-bird.

The Mirror is not alone in noticing the absent PM. The opening days of May’s campaign have been calamitous, with the Prime Minister barely visible. And when she has appeared, the results have been less than rousing:

The hashtag #WheresTheresa has been set up in efforts to tease the Prime Minister out of hiding.

Where is Theresa May?

Can you find her in this pic?

Theresa May's visit to a Welsh factory today looks so staged that it resembles a propaganda clip from North Korea. #WheresTheresa pic.twitter.com/lyTm1cdX7i

Hashtag of the day is #WheresTheresa lets get it trending! pic.twitter.com/k0vmF5XvDx

While May has been in hiding, opposition leaders have been hitting the road, creating excitement around their campaigns.

PHOTO OF THE DAY |

Between her callous policies and her refusal to engage with those outside the Westminster bubble, Theresa May is making that choice easier for many people.