A school girl has written a heartbreaking message about the Tories' attack on children, and it's going viral [IMAGE] - Canary 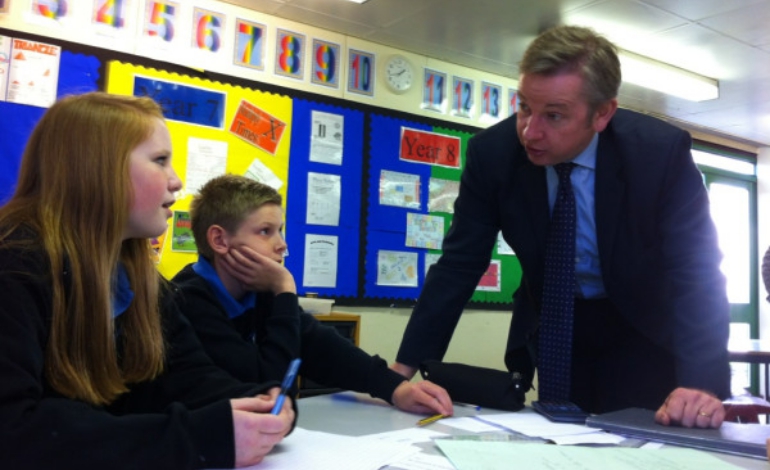 A school girl’s Facebook post about changes to GCSEs is going viral. Not only is it utterly heartbreaking, but it’s a stark reminder of what this government has done to our educational system. And the impact this is having on our children.

Former Education Secretary Michael Gove introduced the changes to GCSEs in 2013. But those changes are only just coming into effect. They include a new marking system that replaces the A-C systems with grades from 1 to 9.

But the harsh reality of these changes has been revealed by GCSE student Emma Jameson. In a Facebook post that has been shared over 22,000 times, she sets out what is happening: 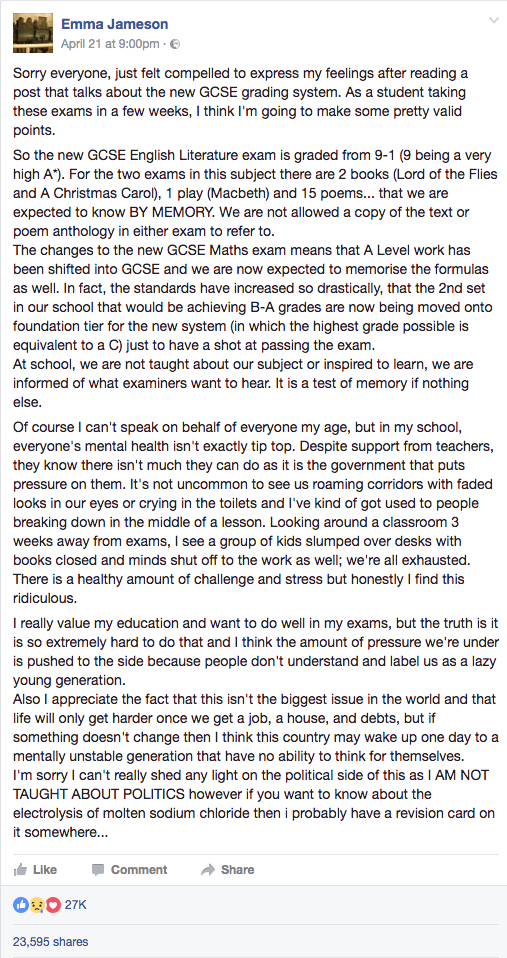 She begins by writing about the new English exam:

So the new GCSE English Literature exam is graded from 9-1 (9 being a very high A*). For the two exams in this subject there are 2 books (Lord of the Flies and A Christmas Carol), 1 play (Macbeth) and 15 poems… that we are expected to know BY MEMORY. We are not allowed a copy of the text or poem anthology in either exam to refer to.

She then covers the new maths requirements and what they mean for pupils:

The changes to the new GCSE Maths exam means that A Level work has been shifted into GCSE and we are now expected to memorise the formulas as well. In fact, the standards have increased so drastically, that the 2nd set in our school that would be achieving B-A grades are now being moved onto foundation tier for the new system (in which the highest grade possible is equivalent to a C) just to have a shot at passing the exam.

And she claims that schools are not doing the one thing they should be achieving – inspiring children to learn:

At school, we are not taught about our subject or inspired to learn, we are informed of what examiners want to hear. It is a test of memory if nothing else.

But it is Jameson’s writing on the impact on children’s mental health that is truly heartbreaking:

Of course I can’t speak on behalf of everyone my age, but in my school, everyone’s mental health isn’t exactly tip top. Despite support from teachers, they know there isn’t much they can do as it is the government that puts pressure on them. It’s not uncommon to see us roaming corridors with faded looks in our eyes or crying in the toilets and I’ve kind of got used to people breaking down in the middle of a lesson. Looking around a classroom 3 weeks away from exams, I see a group of kids slumped over desks with books closed and minds shut off to the work as well; we’re all exhausted.

And this is coming from someone who wants to work hard, learn, and succeed in her exams:

I really value my education and want to do well in my exams, but the truth is it is so extremely hard to do that and I think the amount of pressure we’re under is pushed to the side because people don’t understand and label us as a lazy young generation.

Guess what’s missing from the curriculum?

But with all Gove’s changes, there’s one glaring omission from the syllabus. Jameson writes:

But Jameson is qualified to write about politics. And she’s doing exactly that. Because she, like other teenagers, is at the sharp end of Gove’s changes.

Jameson is a passionate and eloquent teenager, and is exactly the sort of person who deserves to do well. Don’t listen to the politicians. Listen to our children and our teachers who are dealing with the reality of what the Tories have done to the education system. And take the opportunity to do something about it.