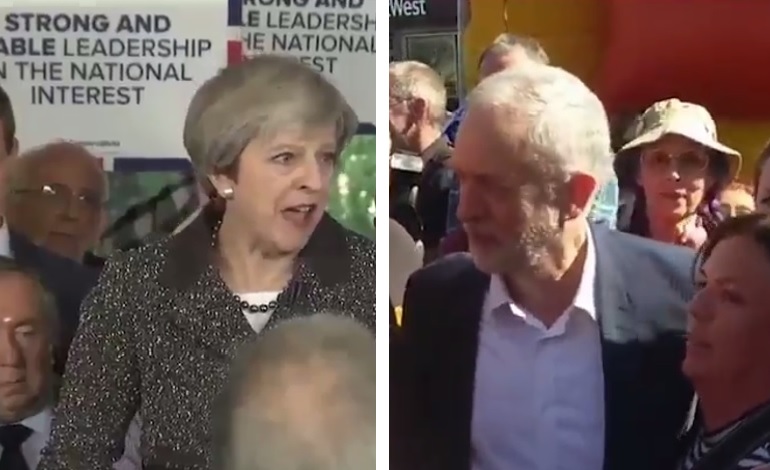 A funny little video is circulating on social media. And it reveals exactly what’s at stake for Britain in the general election.

The 38-second-long video shows the impact candidates from the two main parties will have on the general public, if elected prime minister. But not because of what they propose to do for British citizens. But, specifically, because of the effect they will have on them.

The official Twitter account for Red Labour posted a video on 25 April. It captures a couple of moments in both Corbyn’s and Theresa May’s election campaign. Beautifully accompanied by an appropriate soundtrack:

A tale of 2 campaigns ☹️ 😀 pic.twitter.com/vFyz9OeBZe

As May speaks in the video, the crowd looks on. She triggers a few subdued nods, and an attempt at a knowing smile from one woman. But the mood is generally sombre, with one man in particular looking positively dejected.

The mood, however, is completely different in Corbyn’s crowd. People are animated there, and smiling. There’s laughter and movement. Chatter and enthusiasm abounds.

In the lead-up to the general election, there should be a focus on the policies of the competing parties. What each one is offering to do for the country is instrumental to their electability. But the Conservative Party is already trying to turn the election into a personality contest; Corbyn is a “dangerous” man, it says, because of his foreign policy positions. This is despite the fact that the Tories themselves have almost led the UK to the brink of nuclear war with their posturing. And it doesn’t get more ‘dangerous’ than that.

But in terms of personality, this video speaks volumes. Because it doesn’t only matter what our politicians are like, it matters what they turn us into. And as is clear, May’s persona inspires a passive, glum and dispirited society. Whereas Corbyn’s draws out enthusiasm, energy and joy in people.

Now it’s time to decide which sort of society we want to be.