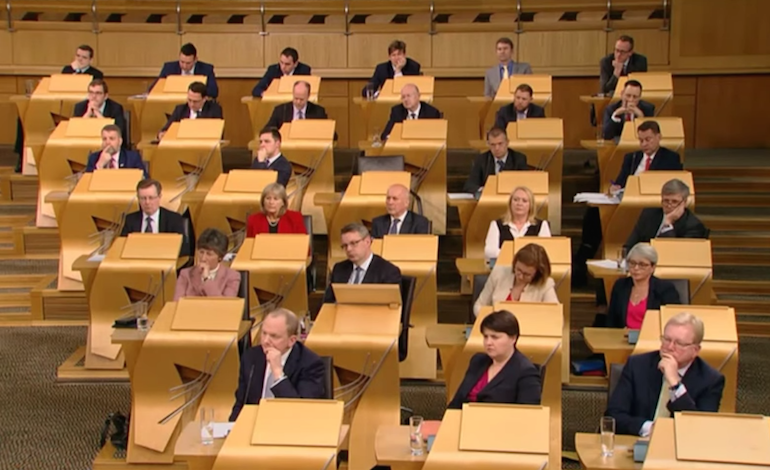 The Scottish parliament was in uproar on Tuesday 25 April as it debated the Conservative government’s two-child limit for tax credits and the so-called ‘rape clause’. Among the array of impassioned speeches, a letter read from a Scottish Labour constituent stunned the Conservative benches into silence. Because it drove home just what impact the clause has on those who have had a third child as a result of rape, and then find themselves forced to defend their right to tax credits.

First Minister Nicola Sturgeon put forward a motion reading “that the Parliament is fundamentally opposed to the UK Government’s imposition of the two-child limit on child tax credits and universal credit, which will push families into poverty”; and that it “utterly condemns the disgraceful and repugnant ‘rape clause'”. The rape clause is an exemption on the limit if a victim of rape can prove the child was born as a result of rape.

Sturgeon opened the debate by saying that the Tories have gone “too far”:

The rape clause is wrong in principle. The Equality and Human Rights Commission… said just at the end of last week that because of this policy there is a clear re-traumatisation of rape survivors. No woman, no woman anywhere, should have to prove she has been raped in order to get tax credits for her child. And I actually can’t believe that in 2017 I am having to stand up in the Scottish Parliament and make that argument.

The two-child limit on tax credits came into force on 6 April 2017. It requires an applicant to complete a form with third party verification if they seek an exemption.

Labour MSP Kezia Dugdale read out a letter from one of her constituents after calling the policy “utterly horrific and abhorrent”:

The author of the letter explained that she fell pregnant after one of her closest friends raped her four years ago. In it, she said that she was prepared for the reaction from those around her and the financial hardship. But nothing prepared her for the impact on her existing children, and the “shame” she would feel. She continued:

I wasn’t prepared for the feeling that suicide was the only way out.

She resolved that keeping the circumstances secret was the only way to protect her children. She went on to say:

Tax Credits kept our heads above water, a buffer between us and the food bank. For that I am eternally grateful. There is no way I could complete that awful form of shame, no matter what the consequences. Looking back that really could have been the thing that tipped me completely over the edge; the difference between surviving to tell the tale or not.

This is the email letter @kezdugdale read out in the @ScotParl condemning the Tories 2 child tax credit limit & rape clause. Powerful stuff pic.twitter.com/QfnFjFXEVr

Conservative MSP Ruth Davidson defended the cuts. She said the UK government has a duty to manage public finances carefully for future generations.

There is little that seems more “abhorrent” than forcing those who have had a third child as a result of rape to have to defend their right to tax credits, potentially further traumatising them. It’s another step to hitting the most vulnerable who find diminishing help after Tory austerity measures. And the real impact, as demonstrated by the author of that letter, cannot be ignored.

– Continue to lobby your MP and note your opposition to austerity including the cap on tax credits and ‘rape clause’ by signing a petition.