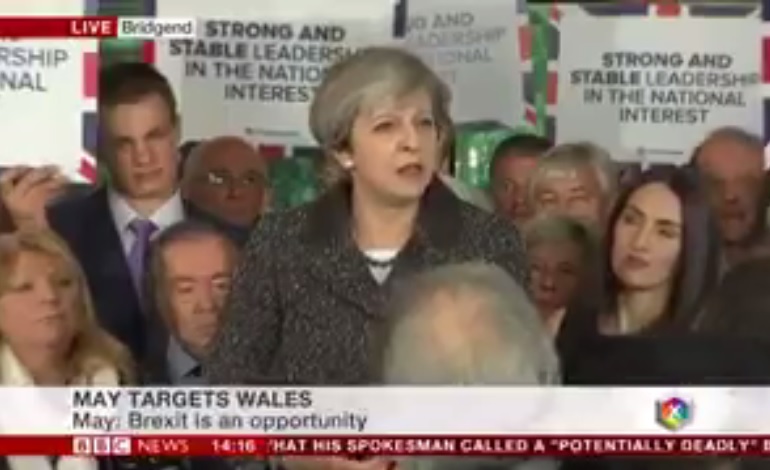 Prime Minister Theresa May has made a hilarious gaffe on the campaign trail. And it’s so funny because it’s true. That’s why her slip-up has gifted the Labour Party a genius new slogan.

Theresa May: "We want to lead the world in preventing tourism". pic.twitter.com/OcrLkWso5W

May visited Bridgend in Wales on 25 April. And during her campaign visit, she said:

We also want to strike deals across the world for trading, for exporting British goods and services. We want to lead the world in preventing tourism.

Although her choice of words was an obvious mistake, it does ring true. Because the hard Brexit her party plans to negotiate will have a detrimental impact on tourism. Both coming into the UK and going out of it. As it stands, for example, a Tory-led Brexit is going to sever close trade ties with Europe. This will push up prices. And suppliers will pass on that rise to consumers, in the cost of goods and services.

For travellers coming into the UK, this may be offset by a weak post-Brexit pound. But a pre-Brexit survey suggested that up to a third of people from some EU countries would be less likely to visit the UK if it voted to leave. According to Deloitte in 2016, 63% of inbound tourists were from the EU. Again, with fewer travellers, prices could rise.

And with an increased cost of living for UK residents, their holiday money pot may dramatically decrease. Which is why some have suggested May’s gaffe is slogan gold for Labour:

Theresa May has just said in her speech she wants to prevent Tourism? If you want to go on Holiday vote Labour 🌹🌞

Of course, this slogan would tie-in perfectly with Labour’s pledge to create four more bank holidays. But that wasn’t really what May was going for. She was trying to applaud her party’s own supposedly ‘tough’ stance on terrorism. A position that the Tories have held since they came to power in 2010. Even though they’re close friends with countries like Turkey – which just this week bombed people in Syria and Iraq who are fighting against Daesh (Isis/Isil). And in spite of the fact that, since the ‘war on terror’ began in 2001, terrorist attacks had actually increased by 6,500% by 2015.

So we don’t need more ‘tough’ talk on terrorism. We need smart talk. And smart thinking.

The same goes for the UK’s tourism industry. Because currently, the holiday forecast is not good.