Michelle Obama is coming to London but I’m not waiting in line to see her. Here’s why. - Canary 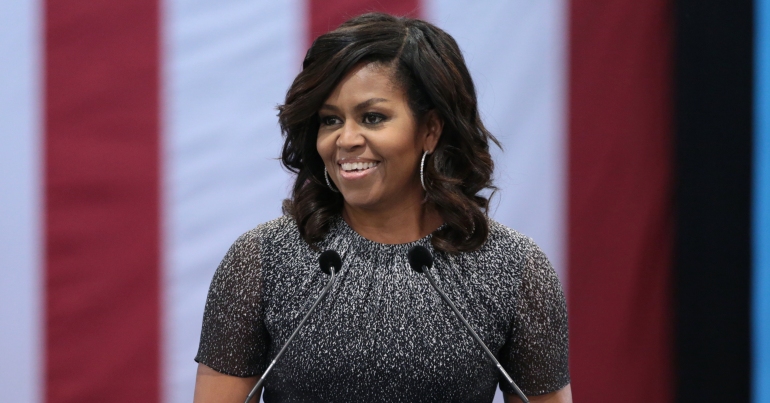 When it comes to holding people accountable for their politics in the social-media age, surely no one is beyond reproach. No one, it seems, except for Michelle Obama.

The former US first lady is due to visit London in December 2018. Tickets for an event with her and writer Chimamanda Ngozi-Adichie, at London’s Southbank Centre, sold out within a matter of hours. This despite a price-tag of £65 each. Does this surprise me? Not entirely. It is, however, disappointing that so many women (including Women of Colour) still consider Michelle Obama to be the second coming – despite the well-documented neoliberal politics both she and her husband espoused.

The politics of representation

As someone who has witnessed the unfolding of the Obama administration, I can completely understand their appeal. As the first Black family in the White House, their victory sparked hope for millions of African-Americans. This, combined with a carefully crafted public persona – the wide smiles, the warm hugs, the rolled-up sleeves, and the mic drops – solidified their appeal for as wide an audience as possible. How can you not love a president who not only represents the disenfranchised, but who comes across as genuinely sincere?

Here’s the thing about representation, though. Someone’s skin colour, or their religion or gender or sexuality or anything else, has little bearing on their politics. In the UK, we have seen plenty of politicians such as Shaun Bailey and Sajid Javid who have demonstrated that your ethnic or religious background doesn’t guarantee more progressive politics. Ultimately, the only measure for someone’s politics is their behaviour – their actions and their stance on key issues, particularly as they pertain to human rights. It was poet and activist Maya Angelou who said “When someone shows you who they are, believe them”. It is, perhaps, ironic that Angelou received the Presidential Medal of Freedom from Barack Obama in 2010. Because the Obamas have, on more than one occasion, shown the world who they really are.

I can, of course, also understand Michelle Obama’s appeal in particular, especially for women, and especially for Women of Colour. She is famous for her warmth, her poise, her humanitarian work, and her fashion sense. She has spoken out about racism and gender inequality. But if we can admire Meghan Markle for those traits while criticising her complicity with an outdated and oppressive system (i.e. the British monarchy), we can do the same with Michelle Obama.

What I find difficult to grapple with is some people’s inability, or unwillingness, to call out Michelle Obama’s complicity. It’s as though she stands on a liberal pedestal that just cannot be knocked down. If Melania Trump has been criticised for being complicit in the oppression her husband deploys, why are we not doing the same for Michelle Obama?

Back when the #BringBackOurGirls campaign was trending, many mostly Brown and Muslim people criticised Obama for her hypocrisy. We are supposedly in an age where the internet never forgets. And yet when it comes to Obama, people have a very short-term memory indeed – despite the fact that she has never publicly denounced any of her husband’s harmful policies, even after his term in office ended. It is especially ironic that these policies are now being criticised by Obama supporters as Trump also carries them out.

Moreover, the recent viral moment between Obama and George W Bush at John McCain’s funeral made her moral compass even more questionable. The exchange prompted her to reveal what comes across as a gross indifference to Bush’s disastrous policies. She gushed “I love him to death,” completely oblivious to the deaths of around half a million people in Iraq alone which were the result of an illegal invasion that Bush spearheaded.

The recent online trend of ‘cancel culture‘ has ensured that no one in the public eye gets a free pass for problematic behaviour. People are quick to ‘cancel’ celebrities as soon as evidence of a mis-step or any wrongdoing comes forward. That’s why it’s even more bizarre that Michelle Obama continues to be a liberal darling for so many people – and particularly for Women of Colour on both sides of the pond.

Recently elected congresswomen Rashida Tlaib and Alexandria Ocasio-Cortez have both faced criticism for their unclear stance on Israel. Both are Women of Colour. Yet despite their weaker influence in comparison to Michelle Obama, in my observation both appear to have received greater criticism online than Obama receives to date.

Now I’m not advocating cancelling Michelle Obama. Because just as occasionally ‘fangirling’ over Meghan Markle is my guilty pleasure, I can appreciate Obama’s appeal. All I ask is that liberals, women, People of Colour – and any combination of these – think critically about Obama’s track record. Especially before parting with £65 to hear her speak.