Two years on, Ken Loach's masterpiece is more poignant than ever - The Canary 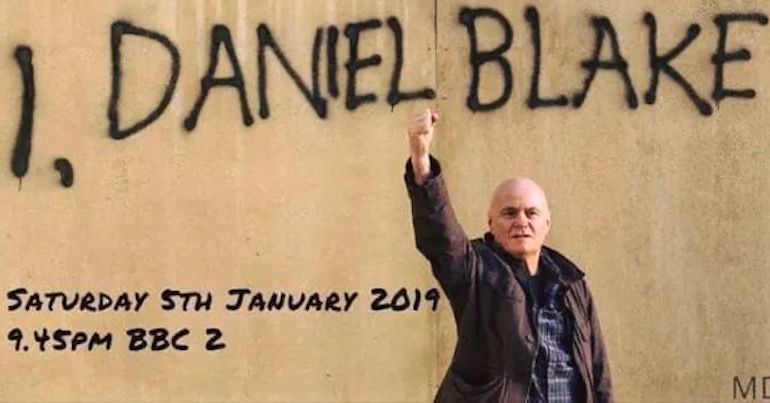 On Saturday 5 January, Ken Loach’s award-winning film I, Daniel Blake will broadcast on BBC Two at 9.45pm. First screened in cinemas in 2016, the film is a searing indictment of the impact of Tory policy on real lives. It charts the story of two people caught in the nightmare of the UK benefits system. And while the film shook audiences, brought many to tears, and achieved wide critical acclaim in 2016, two years later, we need to ask: where are we now? Because two years on, poverty levels are rising. Foodbank use is soaring. Universal Credit is destroying lives. People are dying. Two years on, there are more Daniel Blakes than ever.

“Can you raise either arm…”

Set in Newcastle, the film follows 59-year-old Daniel Blake (Dave Johns). Following a heart attack, he’s forced to apply for benefits for the first time in his life. To get financial support he needs to go through a DWP work capability test (WCA). These dictate whether disabled people receive certain benefits. As The Canary has reported, they’re hugely controversial. His application for Employment Support Allowance (ESA) is rejected because he can walk a short distance and raise two hands above his head. The ‘health care advisor’ refuses to look at his medical notes, sticks to her script; refuses to acknowledge the impact of his certified medical condition. “Can I ask you a question?” Daniel asks, “Are you medically qualified?”.

In April 2018, the Mirror reported that 68% of people who appealed against an assessment decision had it overturned by a tribunal. But although Daniel’s refused ESA, to appeal, he’s told to apply online. Having worked as a carpenter all his life, Daniel has never used a computer.

Meanwhile, he’s placed on Jobseeker’s Allowance (JSA). To receive JSA, Daniel must actively look for work, but his doctor has advised him he can’t work until he’s well enough. And so the spiral begins.

Daniel meets Katie Morgan (Hayley Squires), a single mother of two at the jobcentre. Katie’s sanctioned because she’s late to sign on, so Daniel steps in to offer her moral support. After two years in temporary accommodation in London, she’s been moved 300 miles away to Newcastle. Far from her network of family and friends, Daniel’s the first person who offers her a glimpse of humanity and empathy in Newcastle.

“Of course, the government denies it”

On one level, the film narrates the beautiful friendship that develops between Katie and Daniel as they battle to survive. On another, it’s a stark and brutal testimony that documents the reality of life on benefits under the Tories.

Loach and writer Paul Laverty – who’ve worked together for 20 years – researched meticulously for six months to create the film. They visited foodbanks and jobcentres. They spoke to countless people living under the same conditions as Daniel and Katie. As Loach said:

we met so many people who had been humiliated and destroyed and lost all sense of being able to hold their own in the world.

But as Laverty also explained:

I talked to people inside the DWP… whistleblowers, who told me about how they get targets for sanctions. I was shown intel documents with names of people, with the area managers saying, only the top three have carried out enough sanctions. Of course, the government denies it.

This research shines through the film in every line and every scene. But two years later, Tory-driven austerity has shattered the illusion of any sense of justice or equality in the UK even further.

The issues Loach foregrounds through Daniel and Katie’s narrative haven’t gone away. Far from it. In November 2018, Philip Alston – the UN special rapporteur on extreme poverty and human rights – concluded an investigation into the impact of austerity and rising levels of poverty in the UK. His report is a damning evidence-based assessment of everything I, Daniel Blake depicts. As The Canary reported, poverty causes “misery” for thousands of people. But the government ministers he met on the visit were in “denial”, claiming their policies “were going well”. As Alston confirmed, this shows poverty in the UK is a “political choice” of the ruling Conservative Party.

14 million people, a fifth of the population, live in poverty. Four million of these are more than 50% below the poverty line, and 1.5 million are destitute, unable to afford basic essentials. The widely respected Institute for Fiscal Studies predicts a 7% rise in child poverty between 2015 and 2022, and various sources predict child poverty rates of as high as 40%

Left with no income, Katie – like too many parents in 2019 – tries to feed her children. “I’m just really hungry,” she explains to Daniel before he takes her to a foodbank.

The heartbreakingly powerful foodbank scene was filmed in the same church where Newcastle’s real West End Foodbank helped “more than 46,000 people” in 2018 alone – a year when foodbank use in the UK rose by 13%. These statistics don’t include data from a further 801 independent foodbanks around the country. Between April 2017 and March 2018, Trussell Trust foodbanks distributed over a million (1,332,952) three-day emergency food packages. And as the charity says, “484,026 of these went to children”.

In 2016, when I, Daniel Blake first screened, Newcastle was the first place to see the rollout of Universal Credit. Two years later, the Tories’ flagship benefit continues to destroy lives and communities across the UK. In areas where Universal Credit leeches out, foodbank use soars. In December, the Joseph Rowntree Foundation published its annual report on poverty in the UK. It found that in the last five years, the number of children living in poverty rose by 500,000. 4.1 million children now live in poverty: 4.1 million children are hungry. As activist and author Jack Monroe said:

Food is a weapon in austerity Britain. Hunger, the threat of and the reality of, is used to coerce and control.

“Well, it started in the hostel where we only had one small room”

Loach has dedicated his life to hard-hitting political filmmaking. Yet when his film Cathy Come Home was broadcast in 1966, shocked audiences demanded action:

It was debated in parliament and Tory MPs William Shearman and Ian Macleod led a publicity campaign highlighting the plight of the homeless, which directly led to the charity Crisis being established in 1967.

But since coming to power, the Tories smashed 40 years’ work to end homelessness deep into another crisis. Katie’s forced move from a London hostel to Newcastle “because, allegedly, there is no housing in the capital – a city with 10,000 empty homes” isn’t fiction. Rents have doubled in the past ten years. In 2018, according to government statistics, 82,310 families were living in temporary accommodation. This is an increase of “5% from… 2017, and up 71% on the low of 48,010 on 31 December 2010”. Meanwhile, the numbers of homeless people continue to rise and too many people have died on the streets.

I, Daniel Blake quotes beamed onto the houses of parliament when it was released – Loach is clear where the blame lies. But right-wing arseholes like Toby Young wrote scathing reviews for the right-wing gutter press. Young sickeningly claimed it ‘romanticised’ reality and was just a work of fiction for Tory-voting middle England.

So two years after Loach’s film came out, where are we now?

Have we now grown numb to the staggering fact that, as The Canary reported, over 100 people a day died on ESA between 2014 and 2017? In the last year alone, further cuts to ESA have affected “nearly 50,000” more people. Research from Lancaster University in 2018 equated the “consequence[s] of austerity” with deliberate “social murder”. Dr Chris Grover said:

austerity can be understood as a form of structural violence, violence that is built into society and is expressed in unequal power and unequal life chances, as it is deepens inequalities and injustices, and creates even more poverty.

Grover’s examples of this “murder” are grounded in harsh facts:

“The decision-maker’s decision is final”

At the time, I’d been fired from a zero-hours job and was sanctioned. I’d struggled for years as a single parent and just about kept things together as austerity bit. But faced with a massive reduction in hours, I snapped. Like Daniel, I broke in public (though not as eloquently) in sheer rage against my employers.

No one warns you when you get fired that you’re also immediately sanctioned. The jobcentre really will tell you that you can appeal to the ‘decision-maker’ but that “the decision-maker’s decision is final”. No one cares about the consequences on your mental health of zero-hours contracts, of going through a hearing to clear your name – or about the reasons why you broke. You don’t notice how many job applications ask “reason for leaving last role” until you get fired.

As a mother, you really do get to the point where it feels like there’s only one thing left to sell to put food on the table. I didn’t get there, but seeing the brutal reality of that abyss played out on screen with such familiar logic was too much. No one knew I’d thought about this. Because no one can ever warn you about the fierce dignity and pride that kicks in. It holds you up when everything else is falling apart. It’s not a pretence that everything is OK – it’s a defence against the world not to admit quite how fucked things are. Because without that, life is simply too terrifying.

What Loach, Laverty, Johns, and Squires capture with such brilliance in this film are brutal truths – truths that I’d move the world to protect anyone from ever needing to go through.