A year after Turkey murdered Anna Campbell, a powerful book makes sure her memory lives on - Canary Workers’ Co-op 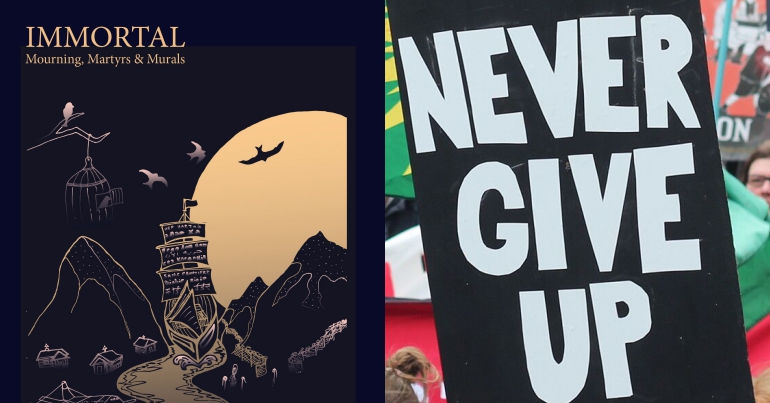 On 15 March 2018, a Turkish airstrike killed Anna Campbell. As I wrote at the time:

A British woman has died in Afrin, Syria. So many of my friends are grieving. And Theresa May has blood on her hands. But it’s not just Anna Campbell’s blood. May, her government, and her arms trade cronies are smeared in the blood of all the thousands of people who have died in Afrin, Yemen and countless other places.

A year later, several hundred people protested and blocked roads Bristol in her memory and in solidarity with the progressive revolution in Rojava, northern Syria. Her friends and family have also released a book to mark the anniversary of her death. IMMORTAL: Mourning, Martyrs & Murals is a collection of prose, poetry, photos and art that is both a moving tribute to Anna and a message that speaks to anyone suffering from the grief of losing a friend or family member too early.

“Anna is with us. We fight on”

Throughout the demo, the chant “Anna is with us. We fight on” rang through the crowd. And this sentiment is echoed throughout the book. One of the first pieces in the book states:

But we are here because we are determined to make sure that her legacy is one of taking action. It is not enough to believe in an ideal. Everyone is responsible for taking action. You have to build the world you want to live in and fight to defend it.

The fire within her that moved her to go and fight has now been lit within all of us and while it burns she will live on with it.

The nature of martyrdom

Anna, like the thousands of others killed in the Kurdish struggle, are called şehîds (martyrs). And an important piece in the book by Jenni explains the concept of the words ‘şehîd namirin’:

This is literally translated as “martyrs do not die” and at first, to western ears, can sound like it’s talking about an afterlife or holding death in struggle up as the goal.

So it’s important to break down these Western misconceptions. As Jenni states:

it means they are kept alive as long as we remember them, honour them, and try to live as they lived. It means to remember the way your friend was courageous, or shared, or brought joy, and try to live that way yourself. Keep alive the feelings they brought to others, the issues they were passionate about. Tell stories. Tell their jokes.

And this is something IMMORTAL does in abundance.

The end of the piece reads:

Şehîds are honoured but the culture doesn’t glorify death… The goal is not death, but life… and şehîd culture says our fallen friends are still bringing us closer to that goal.

The nature of grief

Much is written about the ‘bubbles’ we all live in. In my bubble, it doesn’t feel exceptional that friends go and fight in Rojava, that they go and do humanitarian work in Palestine, or that they do other amazing things. It doesn’t make their actual actions less brave or less exceptional, but it doesn’t feel unusual.

But this also means that it’s important that books like IMMORTAL break out of this bubble and are accessible to those who cannot conceive of having someone they love fighting in a war zone. Where this book does this is in the passages that examine the nature of grief.

“I just want the pain to stop”

My cousin died several years ago at the age of 49. He was my only cousin and more like the big brother I never had. And it’s the writing on grief that speaks to me on a deeply personal level and relates to anyone who’s experienced loss.

Jenni’s piece sums up what so many of us who’ve suffered grief feel:

The day after I was told you had died, I begged the universe for just five more minutes with you. The chance to tell you I wasn’t angry and I understood and I will always love you. Somehow I felt like then it would have been easier to let you go. But maybe that was just another contradictory feeling. Like all the anger and despair and the sense that everything is a dream… When I’m punched in the gut by grief, when everything is broke, I just want the pain to stop.

In the middle of writing this section, I met my new neighbour. With tears in her eyes, she told me about her son who died two years ago at the age of 19. I told her about my cousin and about Anna. That ‘punch in the gut’ is still there for all of us. We adapt. New stories are written. The pain doesn’t go – but we fight on.

When Anna died, she became headline news. Several pieces in the book reflect the difficulties this causes. As the foreword notes:

Reclaiming our love ones from the often exploitative accounts of the public domain was never inteded to privatise our experience. It was about strategising to find strength and joy with meaningful and deliberate intent.

Jenni writes about feeling the ‘hierarchy’ of grief:

Other days things slip and fade away and I scrabble for a connection and I feel like I was just someone you barely knew. That my grief is a self-centring indulgence. I start to make a hierarchy of who has the right to be in pain.

And at the end of a poem, Sophie says:

What’s mine and what’s everyone’s?

Do I get a say in how the world remembers you?

But it’s Anna’s sister Sara’s poem which answers some of these questions. She writes about the “many others” who call Anna “sister” and says:

Who am I to deny them the right of loving you?

My sister, yet Sister to all you smiled upon

Does this reduce the value of this word?

It makes it strong…

Let everyone feel it.

The book is also a powerful call to action. Rowan writes:

You may have joined the YPJ because they represented something you believed in, but you died because BAE systems still sell weapons to Turkey. The Turkish government use these weapons against civilians.

And as Susannah points out in another piece:

Her murder was premeditated and incremental, with every nut and bolt and screw, that was made and sold and packed up and shipped off and slotted together, to make the machines that killed her.

UK companies such as Thales, British Aerospace, and Rolls Royce are all raking in the profits from arming the Turkish regime. It’s all backed by government schmoozing. And it’s all in spite of Turkey’s war crimes.

Anna is with us. We fight on.

Most of us sleep safely in our beds knowing that airstrikes aren’t going to target us. We aren’t under threat of an invading force displacing us and forcing us to flee thousands of miles. We will not experience the fear, panic and grief that UK weapons are causing across the world.

But that security should bring responsibility. We can all do something about it. Arms dealers have offices and factories around the country. We can shut them down. And we must. Because lives depend on it.

Anna is with us. We fight on.