Tom Watson opposed all inquiries into the Iraq war he voted for. But now he wants one for Brexit? - Canary 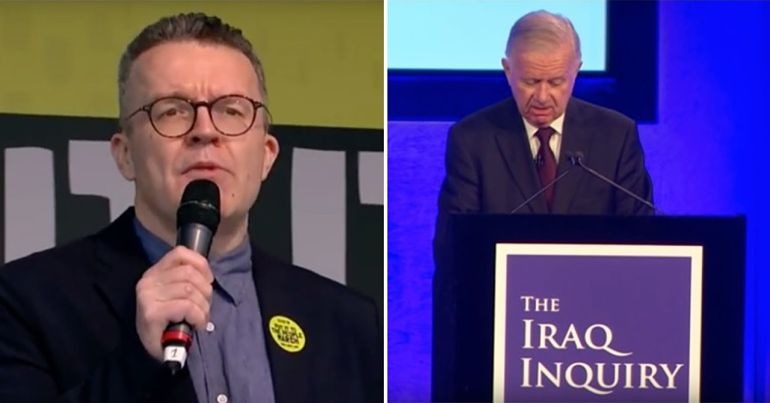 It seems there’s nothing Tom Watson won’t say or do to advance his political status. But the deputy Labour leader’s belief that there should be an inquiry into the Brexit catastrophe takes the biscuit.

After all, Watson not only voted for the invasion of Iraq in 2003. But he also voted against all later inquiries into that blood-soaked chapter of British history.

Watson has fast become unpopular on the Corbyn wing of the Labour Party. Some regard him as a one-man coup against the party’s left-wing membership and Corbyn’s leadership.

He has been accused of “killing Labour from within” on live radio for talking down the party. And other critics believe he is conducting a “pincer movement” with the ‘independents’ to strangle Jeremy Corbyn’s leadership.

So few were surprised when Watson again broke Labour’s leadership ranks to attend the People’s Vote campaign’s ‘put it to the people’ demonstration on 23 March.

Watson differed from Labour’s shadow chancellor, John McDonnell, who didn’t attend out of concern about “alienating Brexit supporters”. Watson did attend, and even came up with his own Brexit policy. He claimed he would vote for Theresa May’s twice-rejected deal if she put it to a second referendum:

The way to break the stalemate is for Parliament and the people to come together, to decide on our future together. It’s time to say with one voice: put it to the people. Prime Minister, you have lost control. Let the people take control. #PutItToThePeople pic.twitter.com/NLln7bgt48

Watson wants an inquiry into Brexit

Since the demonstration, Watson has further solidified his anti-Brexit position.

Now he’s calling for what has been described as a “Chilcot-style inquiry” into the government’s Brexit shambles, arguing that:

We will certainly need a detailed postmortem of how this all came to pass.

It’s hard to argue with Watson’s analysis of the government’s performance. But it’s impossible to ignore his shameless hypocrisy. As his voting record shows, Watson didn’t have the same appetite for an inquiry when it came to the catastrophic invasion of Iraq.

Inconsistent: why no inquiry into Iraq?

However, in January 2019, Watson claimed that:

What I most regret (in politics), unquestionably, was voting for the Iraq War which was a huge foreign policy blunder. ‘I wish I had voted a different way. And I wish I could atone for making the wrong decision.

Didn’t feel ‘regret’ for quite some time…

But as late as November 2016, Watson didn’t feel enough “regret” to stop him from voting against yet another inquiry.

On this occasion, the proposed inquiry would have investigated the contradiction between the public statements and private actions of the Blair government. Blair allegedly made private war commitments to former US president George W Bush. This, despite making public statements to the contrary claiming he would respect the findings of UN weapons inspectors. Worse yet, a leaked Downing Street memo revealed that:

the intelligence and facts were being fixed around the policy [regime change]. The NSC [National Security Council] had no patience with the UN route.

In simple terms: Iraq would be invaded come what may and intelligence was found to justify the policy.

No such hypocrisy from Corbyn

One Labour MP brave enough to oppose the war and support inquiries into it was Jeremy Corbyn.

Corbyn responded to the damning findings of the Chilcot Inquiry in parliament in 2016. And Watson looked on awkwardly behind him. Corbyn said of the Iraq invasion:

Frankly it was an act of military aggression launched on a false pretext, as the inquiry accepts. And has long been regarded as illegal by the overwhelming weight of international legal opinion. It led to the deaths of hundreds of thousands of people and the displacement of millions of refugees. It devastated Iraq’s infrastructure and society. The occupation fostered a lethal sectarianism… that turned into a civil war. Instead of protecting security at home or abroad the war fuelled and spread terrorism across the region…

It’s led to a fundamental breakdown in trust in politics and in our institutions of government. The tragedy is that while the governing class got it so horrifically wrong, many of our people actually got it right. Many on February the 15th 2003, one and a half million, spanning the entire political spectrum – and tens of millions of other people across the world – marched against the impending war. The biggest ever demonstration in British history…

All those who took the decisions laid bare in the Chilcot report must face up to the consequences of their actions, whatever they may be.

And yet when making this statement, Corbyn was heckled and told to, “shut up and sit down” by ex-Labour MP, Ian Austin:

As Corbyn gives #Chilcot statement hear @IanAustinMP shout out to him 'sit down and shut up'https://t.co/4SGRrFGvdJ

But Watson later described Ian Austin’s departure from the Labour Party as a “serious blow”.

Watson has proven that, when it comes to political inquiries, his consistency and principles are lacking. When a personal opportunity arises, only then does he find his courage.

He showed no such courage during, or after, Iraq. But Corbyn did. And it is for this reason that Watson will never be considered worthy as a Labour leader, no matter how hard he seems to try.