There’s an uncomfortable relationship between Britain’s media and its political classes. Today’s Telegraph shows exactly why we should question these relationships. Its cover is basically an advertisement for Boris Johnson’s continued leadership ambitions:

The front page of tomorrow’s Daily Telegraph: Boris Johnson: ‘We have blinked. We have baulked. We have bottled it completely. It is time for the PM to channel the spirit of Moses in Exodus, and say to Pharaoh in Brussels – LET MY PEOPLE GO’ pic.twitter.com/r0m99bgKme

People found a lot to criticise with the piece. A Conservative peer (and newspaper columnist himself) pointed out that Johnson doesn’t seem to understand what he’s arguing for:

How can someone be Foreign Secretary, take themselves seriously as possible PM or even be a lead columnist on the Daily Telegraph and still think that there will be an implementation period without a deal? Here are the final 2 pars of Boris Johnson’s column this morning. Amazing. pic.twitter.com/ldyHMPb4sM

There are two types of hardliner Brexiters, those who want No Deal Brexit.

Others pointed out his lack of follow-through:

Name me something Boris said he would do that he has done.

Many found humour in the situation: 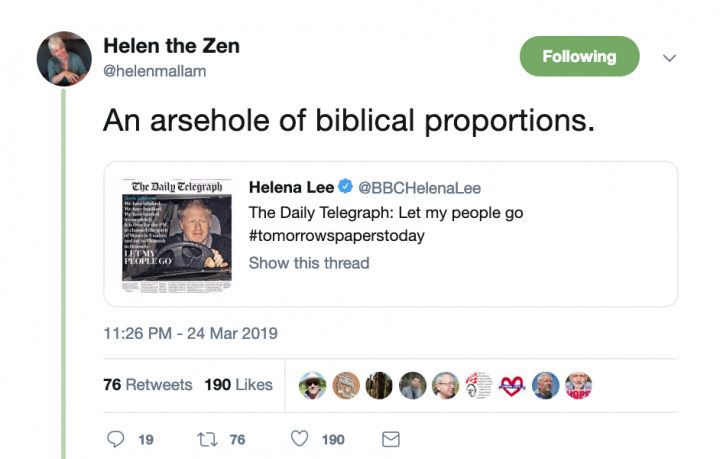 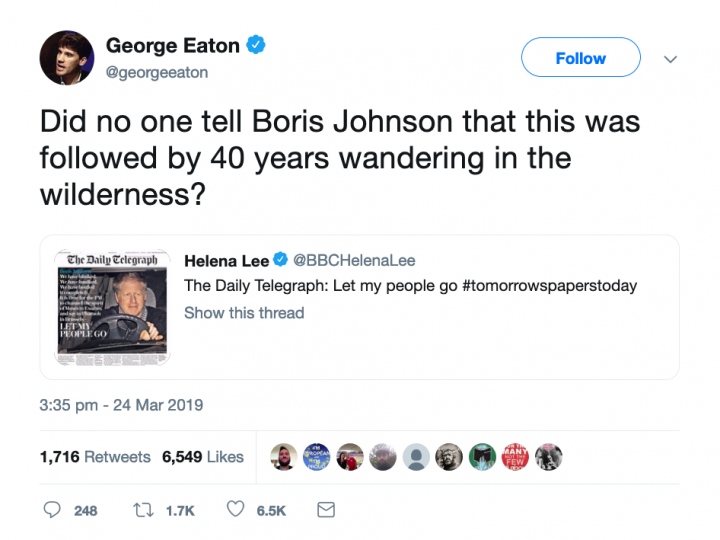 While others speculated if this would be the moment of Johnson’s return: 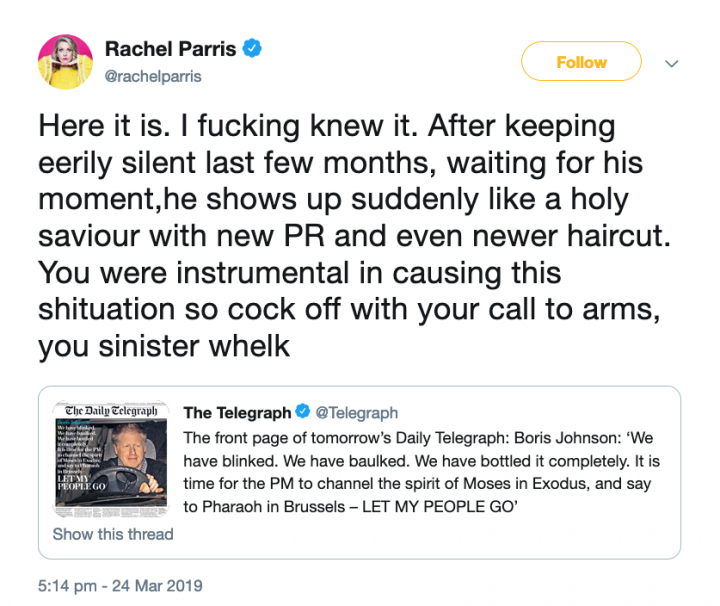 As Johnson seems to be constantly on the verge of making a leadership bid, it’s unlikely anyone got good odds on this prediction.

Johnson famously spearheaded the Brexit campaign; before that, he considered supporting remain. One of his former junior ministers claimed:

Johnson actually quit the post-referendum leadership race – likely because he would have lost. Although Johnson seems to want the top job still, he’s unpopular with many in his party. Steve Richards wrote in the Guardian that no other aspiring prime minister has:

displayed such transparent ambition as Johnson, dominating media coverage while leading loudly and vaguely the Brexit charge against Theresa May. It is all too crudely obvious. Overt egotism annoys colleagues, who have the power to stop the hunger being sated.

There are Tories who are dedicated to the leader being ‘anyone but Boris’, and he’s faced much internal criticism. That hasn’t stopped him trying his luck – the man’s reported ‘last chances’ to become PM coming and going more frequently than London’s red buses.

One thing that’s kept this backbench MP in the public consciousness is his column in the Telegraph.

The British media has been described as having a ‘revolving door’ with the political classes. In June 2018, Labour claimed that former ministers taking top jobs in business and the media is “at the heart of how the British establishment survives and thrives across Whitehall”.

George Osborne becoming the editor of the Evening Standard drew particular criticism. As Grant Feller wrote in the Guardian at the time:

journalism has never been more vital to society. Yet because of the scourge of fake news it is also one of the least trusted. Osborne’s editorship can only dent that level of trust further… journalists who work on the Evening Standard… will never again be able to write about individuals who are conflicted by multiple interests without knowing, deep down, that their boss is one of the most conflicted of all.

The difference between Osborne and Johnson is that Johnson is still actively engaged in politics. ‘Actively engaged’ is an understatement, too; Johnson has shaped several of the most important events of the past few years.

His column begs several questions: like how can anyone trust the Telegraph to hold the powerful to account when the powerful are literally on its payroll? Johnson earns £275,000 a year writing for the paper – with the Telegraph being a business in a capitalist society, how can we trust it won’t prioritise protecting its investment over honest journalism? And how can anyone believe that Johnson – an already wealthy man – isn’t using the paper primarily to promote his own interests?

There aren’t good answers to those questions. Today’s Telegraph shows again that corporate media and careerist politicians are so entwined that you can’t see where one ends and the other begins.