While all eyes were on Chequers, a TIG MP travelled 3,000 miles to smear Jeremy Corbyn - The Canary 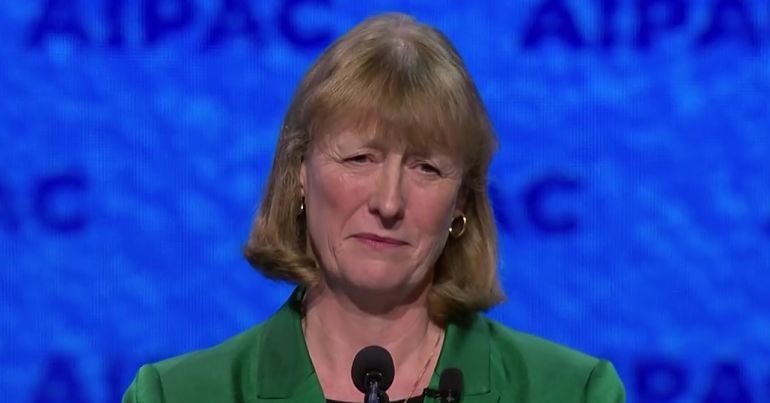 While the Brexit chaos continued at Chequers on 24 March, an Independent Group (TIG) MP travelled over 3,000 miles to smear Jeremy Corbyn.

Labour Friends of Israel (LFI) chair Joan Ryan spoke at the American Israel Public Affairs Committee’s (AIPAC) 2019 conference in Washington, DC. During her contribution, she repeated a weak and debunked smear about the Labour leader to the 18,000-strong audience. She was also very candid about the issue she has with Labour’s current direction.

Speaking to the choir

AIPAC is a powerful pro-Israel lobby group in the US. This year, a number of progressive politicians decided not to attend its conference. Bernie Sanders’ policy director Josh Orton said he wouldn’t attend because it platforms “leaders who have expressed bigotry and oppose a two-state solution”.

Ryan, however, said she was “proud” to attend as a “Zionist” who’s a “staunch supporter of the world’s only Jewish state”. But the MP tried to paint a dire picture of the party she’s just left to the adoring crowd. She said:

Over the past four years, Britain’s Labour Party… has been transformed.

Labour, Ryan asserted, has been “taken over by the far left” and is “riddled with antisemitism”. She claimed it’s no longer a “close friend of Israel”, but “now seeks to demonise and delegitimise” the state. Ryan also claimed the party is now led by someone who:

proudly declares Hamas and Hezbollah to be his friends.

Corbyn has tackled and debunked this smear against him on a number of occasions. As Corbyn has explained, he used the word ‘friends’ to describe Hamas and Hezbollah during a meeting in parliament. This was “inclusive language“, chosen to encourage dialogue about the peace process.

In a fiery 2015 interview on Channel 4 News, Corbyn also said the media’s obsession with the word “friends” was an attempt to “trivialise” the issue of how peace can be achieved in the Middle East. He accused Krishnan Guru-Murthy of doing “tabloid journalism”.

In short, this supposed mark against Corbyn’s name is a non-starter; because it’s a non-story. But that didn’t stop Ryan spreading it at the AIPAC conference.

Unsurprisingly, the MP didn’t contextualise the Labour leader’s use of the word ‘friends’ either. She didn’t explain that he used it out of a desire to advance the peace process in the Middle East. In fact, she didn’t mention the peace process at all.

No, all Ryan did at the conference (aside from repeating a baseless smear against Corbyn) was effectively affirm her dedication to the status quo on the Palestine/Israel conflict. She blurred the lines between antisemitism and opposition to Israel’s actions by speaking about them in the same breath. And she attacked her former party.

Antisemitism is wrong. Israel’s occupation of Palestine is wrong. A legitimate peace process is vital to securing Palestine and Israel’s security. Corbyn is right: all relevant parties need to be involved in bringing peace to the region. All these things can be true at the same time. Indeed, acknowledging that they are all true is necessary in moving towards peace for both Jews and Arabs in the region.

Ryan, however, is clearly not a politician willing to address that at all. Labour is better off without her.