'Sabs killed the fox' and other hunt lies are quickly coming apart. Just like hunting itself. - Canary 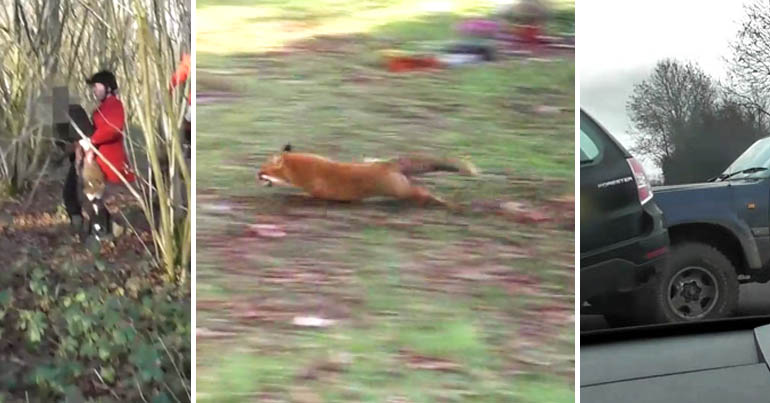 Hunting is backed into a corner. Its overt cruelty and lack of compassion are unfit for today. That hasn’t stopped hunts and their supporters from trying to manipulate their way out of the situation by attempting to quash one of its greatest threats: anti-hunting direct action. But hunt lies aren’t going as well as the hunts had hoped.

On 13 March, a district judge found the Thurlow Hunt guilty of illegally hunting a fox. This decision was a victory in more ways than one. It was a successful prosecution of hunt staff under the Hunting Act, a frustratingly rare occurrence and so something to celebrate. Significantly, in making his decision, the judge also cut through a common accusation peddled by the hunting community: that ‘sabs did it’.

The Thurlow Hunt claimed that a “horseshoe” of 21 hunt saboteurs blocked the fox as it tried to escape hounds. As a result of that, and noise made by sabs, it said the hounds caught the fox and killed it. If that’s what had occurred, it would have absolved the Thurlow Hunt both legally and ethically. A brilliant ‘gotcha’ moment against sabs: activists out to save animals but kill them instead. This would also have gifted a golden PR opportunity to the hunting community.

Video played in court showed the claim to be unfounded. Not only were there no more than eight sabs present, but hunt staff were placed between sabs and the fox. The judge described huntsman Christopher Amatt’s claim as “fanciful”. And in doing so, he exposed a myth that’s often pushed by the hunting community.

It’s not hard to understand why this is an enduring narrative. The idea that sabs ‘bring it on themselves’ provides schadenfreude, or joy, in others’ mistakes. The deep animosity between pro- and anti-hunting communities is fertile ground for ‘getting one over’ on the other side. And the irony of sabs being responsible for killing a fox, hare or deer is too delicious to resist for supporters of hunting – even though it’s hunters that have brought a pack of hounds into habitats where these creatures live.

But there’s also a practical reason for hunts to push the ‘sabs did it’ line. Because hunting largely occurs in fields and woodlands far away from the general public, the details of an incident are largely reported to the public only by the parties involved. By confidently asserting a variation of sabs’ claims, hunts immediately muddy the public narrative about an incident. Doubt is a powerful tactic, used to discredit activists throughout history.

On 25 February, anti-hunting campaign group Hounds Off released footage of hounds chasing a lactating vixen through a churchyard in Charlton Horethorne, Somerset. Media outlets including the Mirror, Independent and SomersetLive reported on the video. The outlets approached the Blackmore and Sparkford Vale Hunt (BSV) or the Countryside Alliance for comment but received none.

A member of the public did receive a response from the hunt, though. Published by Hounds Off on 15 March, a secretary for BSV said the “film taken is not genuine and is deliberately constructed to discredit us”. The response suggested that hounds chased the fox because sabs ‘confused’ the dogs. It also implied sabs “caused some hounds to go through the church grounds”.

Hounds Off’s five-minute video showed no sabs present during the incident, nor the use of horns or shouting by monitors. Hounds Off monitor Kevin Hill told The Canary that Dorset Hunt Sabs were present on the day but were “up on the ridge above the village. They played no part in the incident.”

On the other hand, video shows a huntsman using his horn as hounds stream through a field next to the churchyard. The two horn calls resemble “doubling the horn” and “blowing away”, which encourage hounds to hunt. The video doesn’t appear to show calls to stop hounds. The footage also appears to contradict BSV’s statement that it tries to “stop [hounds] at the earliest moment” if they deviate from an allegedly laid trail. The Canary contacted the hunt to clarify its comments but didn’t receive a response.

BSV, like the Thurlow Hunt, tried to discredit anti-hunting activists. And because the video provides compelling backing to the claims made by Hounds Off, BSV even tried to smear the video as “constructed”.

Police have also jumped on the video-smearing bandwagon. In February, Cheshire Police said information posted on social media “does not always reflect the full scenario”. This came after the force dropped charges against Andrew German, huntsman for the Cheshire Forest Hunt, for attacking a sab. Cheshire Hunt Saboteurs uploaded footage of the attack, ridiculing the police statement that there was “insufficient evidence”.

Cheshire Police’s assertion gave pro–hunting newspaper the Telegraph a chance to run with the headline: “Police force urges public not to believe everything posted on social media about fox hunting”. Cheshire’s Police and Crime Commissioner (PCC) David Keane challenged the police’s comments. As a result, Keane said acting chief constable Darren Maitland “admitted that they were inappropriate”. But the incident showed a police force pushing the same discrediting statements as those with pro-hunt interests. The Telegraph later deleted the article from its website.

On 16 March, a Toyota Land Cruiser rammed two cars used by hunt saboteurs. Footage from Sheffield Hunt Saboteurs and Manchester Hunt Saboteurs showed the Toyota’s front number plate had been removed and rear plate hidden. It also appeared to show the driver intentionally hit both cars before speeding off. The hit and run happened whilst sabs followed the Grove and Rufford Hunt. Both groups claimed links between the Toyota and the hunt.

A spokesperson for the Grove and Rufford Hunt condemned the incident and said the people in the car “are not representatives of the hunt”. Notable pro-hunting Facebook page This Is Hunting UK (TIH UK) went further. In a now-deleted post, TIH UK said on 19 March that it “categorically denounce[s] the use of violence and intimidation on either side of this debate”. Furthermore, it said the people in the Toyota were “not… hunt supporters” and it would be “happy to help the police with their enquiries”.

The video shows the Toyota coming out of Gold Hill Farm. It also shows the same vehicle emerging out of the farm earlier in the day. A spokesperson from Manchester Hunt Saboteurs told The Canary that Gold Hill Farm was the hunt’s meet that day and that:

as [hunts] are so keen to stop people trespassing I don’t see why they would allow a vehicle full of strangers to enter the meet.

In an attempt to blame the animal rights movement for what happened, TIH UK said that “hostilities” between hunts and saboteurs had “been escalating due to… the Animal Liberation Front” (ALF). Manchester Hunt Sabs described this claim as “an incredible stretch”. Actions claimed by the ALF in the UK during recent years have primarily focused on the pheasant shooting industry or on ‘liberating’ caged animals. TIH UK’s claim that ALF actions are stoking tensions between hunts and saboteurs seems like another effort to discredit activists.

On the other hand, it’s worth noting that TIH UK’s founder, James Barclay, used to be a master for the Grove and Rufford Hunt.

These are just some of the “fanciful” stories the hunt community has spread in recent months. There are many others, including saying sabs intentionally call hounds into busy roads, harm hounds with chemicals and even attack horses. Many of these have been told for decades. Despite the alleged regularity of these acts, the hunting community rarely, if ever, publicly offers concrete evidence. Instead, it relies on repeating the same lies again and again. And that’s not to mention the biggest lie of all: trail hunting.

Such lies once held sway. Because hunts present themselves as genial, upstanding members of society and the activity happened away from the eyes of the public, they gained traction. But that’s quickly changing. Camcorders, bodycams and dashcams provide evidence for the public to decide for themselves. As a result, the hunting community’s claims and actions are becoming increasingly desperate.

Sabs, monitors and the wider public are picking apart the threadbare lies holding together the hunting community. And, like the activity itself, these stories are rapidly falling apart.