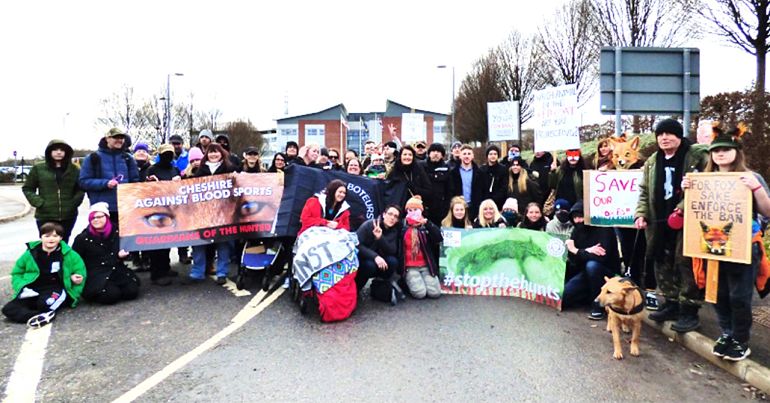 Hundreds of people came together outside Cheshire police’s headquarters to demand “REAL police and CPS [Crown Prosecution Service] action” against hunting. The event follows a string of incidents that have raised serious questions over police attitudes towards hunting in the county.

“We felt a real need to send a message”

Protesters held the 3 February event at Clemonds Hey, outside Cheshire police’s headquarters. It was organised by local resident Kitty Noble and Jane Smith, deputy leader of the Animal Welfare Party. Videos from the day show placards, banners and a drumming band outside of the building.

We attended the demonstration with almost 400 other like minded people, not just anti hunt groups but also the general public that have also had enough of foxes being brutally killed by the hunts operating in Cheshire week after week. … We felt a real need to send a message that this lack of action by the police and also the CPS will not be tolerated, we have to be the voice for the wild animals.

The group pointed out that the protest wasn’t just about Cheshire:

It’s also clear that the loopholes in the Hunting Act have to be closed and the Act strengthened so that no animal loses its life to the clear illegal hunting under the guise of ‘trail hunting’ that is happening not only in Cheshire but nationwide.

The Canary reported on 10 January that two foxes had allegedly been killed by the Cheshire Hunt within days of each other. Police later said they’d launched an investigation into the kills. While that is ongoing, it was the outcome of another investigation that sparked outrage.

On 21 January, Cheshire Hunt Saboteurs (CHS) said “all charges” against Andrew German, huntsman of the Cheshire Forest Hunt, had been dropped by Cheshire police. These related to an incident in December 2018 when German was filmed riding his horse at a saboteur and hitting them with his whip.

CheshireLive reported that the group had provided “four videos to the police, filmed from different angles”. The hunt submitted counter allegations of assault. Cheshire police chose not to take any further action in either case. Because of this, CHS said it would pursue a complaint with the Independent Office for Police Conduct (formerly the IPCC) as well as “private legal proceedings”.

On the other hand, Cheshire police issued a public statement. Without specifics, the statement said prosecutions are difficult because “people are reluctant to engage” with investigations. However, CHS dismissed this claim. The group said it had worked extensively with the police but “absolutely nothing” had come of the efforts.

Cheshire police’s statement also caused a stir because it claimed information posted on social media “does not always reflect the full scenario”. A now-deleted Telegraph piece framed this statement as Cheshire police urging the public “not to believe everything posted on social media about fox hunting”. CHS called the claim “ludicrous” and “petulant”.

I have spoken to the acting chief constable about my deep concerns in regards to the comments made by Cheshire Constabulary and he has admitted that they were inappropriate.

It has been encouraging to see that more people are willing to come forward to provide us with witness statements and video evidence this year. This has helped us to progress investigations into allegations of illegal activity associated with hunts in Cheshire. We are grateful for this cooperation as we need evidence to be able to progress such investigations.

As CHS pointed out, Cheshire police’s flip-flopping has led the public to question the force’s impartiality. That’s why hundreds of people turned out to protest on 3 February. Although Tim Bonner of the pro-hunting Countryside Alliance described the protest as “disgraceful” for wasting “so much police time and taxpayers’ money”, it’s clear that many taxpayers actually want the police held to account.

Saboteurs and monitors have regularly witnessed hunts breaking hunting laws. Despite this, only 47 convictions and cautions against hunting packs have been upheld since the Hunting Act came into force in 2005. Moreover, Devon County Hunt Saboteurs caught the government’s chief legal adviser hosting a hunt at his home on 5 January. It’s also worth remembering that, in 2016, CHS filmed Cheshire police officer Claire Ford riding with the Cheshire Forest Hunt.

It’s no surprise then that lack of legal action against hunts has led to frustration among dedicated anti-hunting activists. But, as the Cheshire protest shows, this frustration is now growing in the wider public too.